Amadio vying to make the most of an extended season 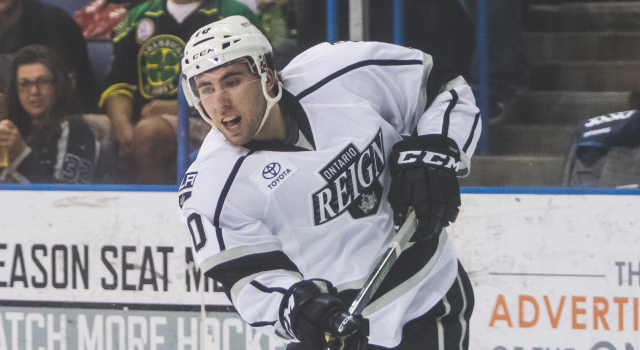 In their late teenage years, an NHL prospect’s hockey schedule evolves more into a lifestyle. It’s not just the regular cycle of practices, games and travel, but the depth to which such a commitment is embedded in their pursuit to become an NHL player that deserves recognition.

For players selected in the first round, that regimen often segues from rookie camp, to training camp, to their junior team, to a world junior evaluation camp, back to their junior team, to the playoffs, to a black ace role on a pro team, to several weeks of rest and recovery, back to their NHL team’s development camp, and again, potentially a national team summer development camp. For players in their draft year, that cycle comes with the heavy pressure and speculation associated of where and by whom they’ll be drafted.

Though he wasn’t a first round draft pick, Michael Amadio is experiencing this lifestyle – and he, like any like-minded player his age, probably wouldn’t trade the developmental experience for the world. It is simply part of becoming a player at the highest professional ranks.

Having left the North Bay Batallion following a second round defeat in the Ontario Hockey League playoffs, Amadio immediately had to push the proverbial reset button before he stepped into a role with the Ontario Reign, whom he joined late in the season on a PTO, having already signed a three-year entry-level contract with Los Angeles.

“It was obviously a disappointing end there, getting swept by Barrie in the second round,” Amadio said. “But once I came here it was a totally different mindset. This environment here, all the guys are really good, and you can tell that they want to win, so it’s nice to be a part of it.”

Selected in the third round in 2014, Amadio is coming off a breakthrough season with OHL-North Bay in which he finished ninth in the OHL with 98 points and fourth with 50 goals.

Those types of elite offensive numbers sprout up every year across junior hockey, though the Sault Ste. Marie native had already reinforced his reputation as someone who was “really accountable away from the puck,” and a strong checker, according to Kings Vice President of Hockey Operations and Director of Player Personnel Michael Futa.

“He didn’t cheat in his own end, but on a team that kind of doesn’t score a lot of goals, he just took it to another level, and he made plays in the games I was at, he’s got an excellent release, he shoots the puck,” Futa told LA Kings Insider in March. “He probably is going to have to learn how to protect it a little better entering the offensive zone, but they’re all things that our guys teach in their sleep and become traits that give us the identity of our team, so I’m thrilled for him.”

Though he didn’t participate in any regular season games, Amadio was thrust into a postseason role with AHL-Ontario as Los Angeles’ top farm affiliate has endured injuries to forwards Jonny Brodzinski, Brett Sutter and Ryan Horvat. Whereas the rest of the Reign’s late-season black aces have since returned home, Amadio remains with the club and through five playoff games has posted two assists and a plus-one rating.

In a Game 1 win over San Diego last Thursday, he hustled into the offensive zone to apply pressure, created a turnover, and left a slick drop pass that Joel Lowry buried upstairs for a go-ahead goal late in the second period.

“That was a great forecheck by him,” Mike Stothers said. “The angle that he took on the guy he was going in on was terrific. He really kind of painted him into a corner with nowhere to go and jumped on the turnover. … You know what? As good of a play as it was from Amadio and the composure to give it to Lows, I thought Lows did a real good job of holding onto it for just a split second and then was able to throw it upstairs. Real good play by a couple young guys, and your line that goes out fourth. Good contribution.”

When a player is available to pot 50 as part of a near-100-point season in their 19-year-old year, there’s clearly a step being taken in development and maturation, and at the moment Amadio is displaying that. That step will continue as he acclimates himself to the pace of the AHL, which is the biggest difference he has experienced since making the jump from junior hockey.

“Obviously everything’s a step faster,” he said. “Guys are right on you, so you have to be able to know what you’re going to do with the puck before you get it and make sure you know where everyone is on the ice. I think that was the biggest thing for me coming up here.”