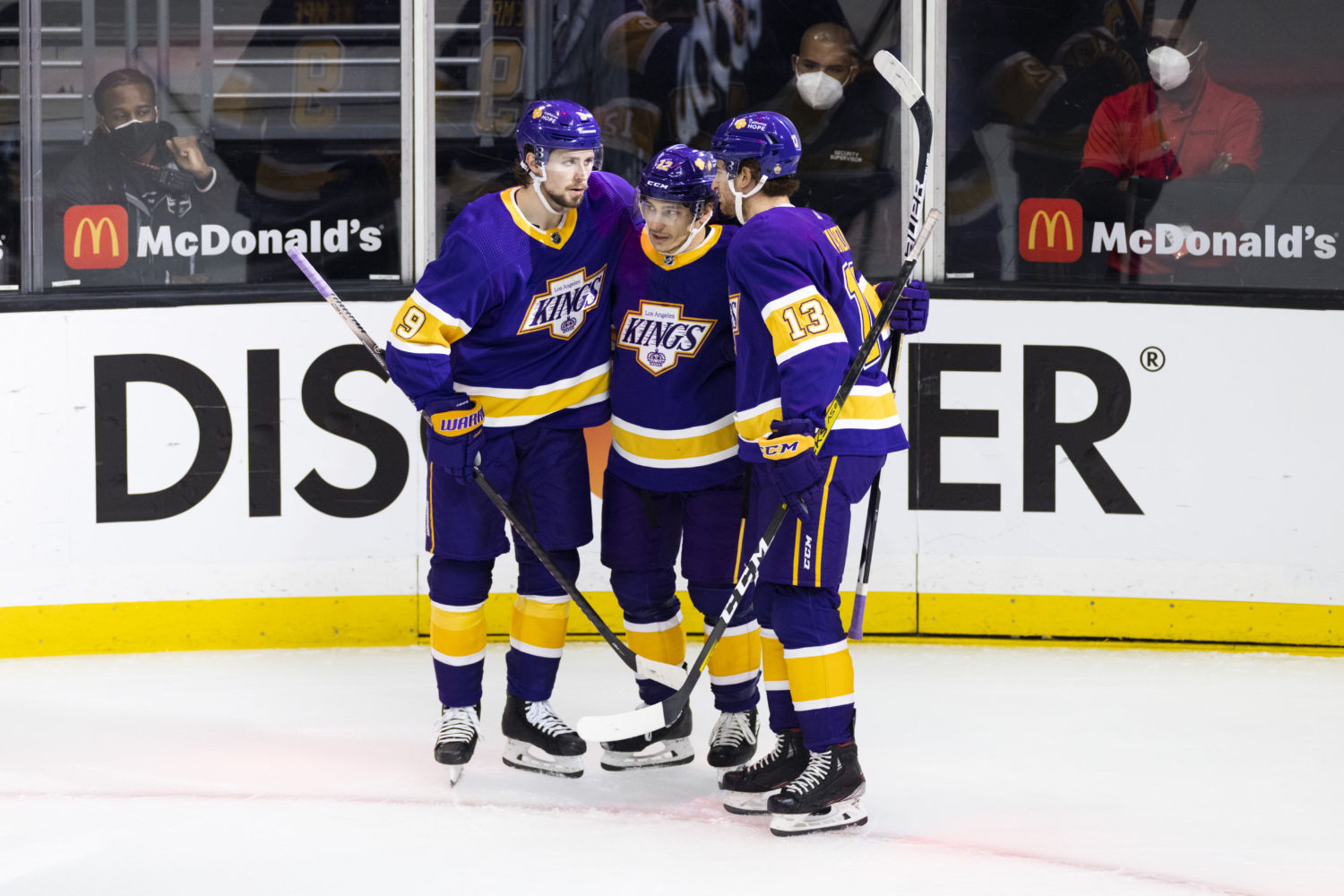 For the second straight day, the Kings held a full-team practice at Toyota Sports Performance Center……just feels weird saying that, doesn’t it?

Yesterday and today are the first time the Kings have had consecutive practice days since the break between the games on March 24 in San Jose and March 29 in Vegas. The postponed games in Colorado made just the first back-to-back days without a game since that stretch as well.

Head Coach Todd McLellan talked yesterday about the areas of emphasis in practice over these two days – forechecking, odd-man rush goals against, special teams – saying that the former two were yesterday’s emphasis, with special teams coming more into play today. Asked about the special-teams work, specifically regarding the power play, McLellan said that the Kings are putting the time into both zone entries and in-zone work with that unit.

“Both, because I think they all go together,” he said earlier this afternoon. “Entries, one unit seems to do a good job of entering while the other one struggles, so there’s a tradeoff, in the zone, we’ve done some of the things we want to do positionally and structurally, but we’re slow. We’re not reacting as quick as we need to, and that’s two-part, us getting a little bit sloppy and penalty kills improving.”

Adrian Kempe, who has skated on the top power-play unit for the entirety of the season until the Kings made some drastic changes last time out, agreed with his head coach regarding the speed at which the team needs to play on the man advantage.

The fifth-year forward said that earlier in the season, the team found success when it was able to move the puck quickly, make simple plays and simple decisions, and get shooting opportunities as a result. A return to those things is a primary focus here for the Kings.

“I think in-zone, we’ve got to get back to moving the puck a lot faster, shooting more pucks, myself as well, I’ve been too slow with it, trying to look for a better option than maybe just the simple play or the simple shot,” Kempe said earlier today. “Those were the opportunities we were scoring on at the beginning of the year, we just moved it quickly, shooting and getting the puck back. I think that’s what we have to get back to.”

McLellan said that he is hopeful that the goal last time out, Trevor Moore’s tally on Wednesday against Vegas, spurs the confidence level of the power-play units as a whole. Kempe again agreed, going back to the success that the team had on the man advantage earlier this season, saying that it felt like the Kings were scoring almost every night when things were going well.

Now, when they aren’t, it’s a focal point to try and rekindle that confidence and get back to what was working in the past.

“At the beginning of the year, we scored it felt like every game, and when you have that confidence, it helps a lot,” Kempe said. “Now, we’ve had a stretch where we hadn’t scored in a while. We got one last game, hopefully that gives us some momentum back, but now we’ve had a couple of days to talk about it, watch some video on it, what we did well before, and what we maybe didn’t do as well in this stretch now.”

Here’s how the Kings looked this morning, by jersey color –

Today’s configuration of forwards gives us a bit more clarity as to what we might see tomorrow, with the team appearing to line up similarly to how they ended their last game, on Wednesday versus Vegas.

The biggest change made during that game was putting Gabriel Vilardi between Adrian Kempe and Trevor Moore on a line for the third period. Kempe spoke after practice today about playing with both players.

Kempe on Vilardi – We haven’t played together in a while, but going back to the games we did play together, I think we had some really good games and that’s what we have to get back to. Gabe, he’s a super smart player, he has really good hands and can make a lot of plays. Going back to playing with him, I like playing with [Vilardi and Moore], they can make some really good plays, we’ve just got to put it together and do it over the next couple of weeks.

Kempe on Moore – He works his [butt] off out there every single game and practice and he has really good skill too. He’s really good at stripping pucks, getting pucks back, he’s just easy to play with. Going back to playing with him a month or two ago, we had some good games together. I think we just try to talk before the games about keeping it simple, try to work hard and get pucks back, because we know we’re going to get some chances then. He’s super easy to play with, works hard, good on the penalty kill, can play power play, that’s awesome.

From yesterday, only defenseman Kale Clague did not skate with the group. Clague’s absence was not disclosed, but he is, of note, the only one of the nine defensemen yesterday who is able to be assigned to the AHL. At this time, however, Clague remains on the active roster.

What is certainly trending positively at the moment is that defensemen Matt Roy and Tobias Bjornfot both appear to be moving towards a return to the lineup, with both players skating with the group in full again today.

Bjornfot’s return was covered yesterday, and more on Roy below, who has now had two full practices under his belt since he officially cleared COVID protocol yesterday.

For any number of reasons, it’s been good to see Matt Roy back on the ice.

From a personal perspective, it’s great to see him back and healthy, ready to rejoin the team for full practices as of now, and potentially games beginning tomorrow.

From a team perspective, Roy has been missed. The regular second-pair, right-shot defensemen has been out of the lineup for his team’s last seven games, with the Kings losing five of them. Roy’s importance to the group isn’t understated, and McLellan below discussed his ability to calm plays down when things begin to go off the rails.

“First of all, we’re excited about him being around,” he said of Roy. “He just brings a calmness to the group back there, he’s a legitimate, full-time NHL player obviously, and his ability to calm situations down, even in practice we’ve seen that from him the last couple of days. Off for a while, I think the time off took its toll on him a little bit, and he looked much better today in practice than he did yesterday. We’ll have to make a decision on him for the game tomorrow, but I would think he’s pretty darn close.”

Roy spoke with the media today for the first time since returning from NHL’s COVID-19 Protocol. He discussed how he felt throughout his time off, including the struggles of the first few days, how challenging it was for him personally to not be on the ice with his teammates once he did start to feel better, and how he knows when he is truly “ready” to return to the lineup.

On Saturday evening in Minnesota, San Jose Sharks forward Patrick Marleau tied Gordie Howe for the all-time games played record in NHL history. Tonight, Marleau is expected to break that record, taking sole possession of the mark set by Howe across his NHL career which spanned 34 years. Howe applied the finishing touches during the 1979-80 NHL season with the Hartford Whalers, the only other NHL team he played for besides the Detroit Red Wings.

Marleau will surpass Howe with games played from three different franchises – San Jose, Toronto and Pittsburgh – including 1,595, soon to be 1,596, with San Jose. Marleau’s head coach for 452 of those games, and six seasons, was current Kings bench boss Todd McLellan, who had the following to say regarding Marleau’s accomplishment.

“I think it’s remarkable, in any sport to have an individual do that,” McLellan said. “I’m certainly proud of Patty, as anybody else is, anyone who’s been around him appreciates what he’s done, or anyone who’s been in the league. I think it’s a remarkable feat, I’m not sure that it will be broken, it may be one of those records that stays forever, and he deserves it. He’s done everything to earn the accolades that come with it.”

Marleau shared a special moment with veterans Anze Kopitar, Jeff Carter and Jonathan Quick following the final meeting of the season between the two teams, at SAP Center on April 10, shown below.

Kings players showed their respect for Patty Marleau after playing him for the final time this regular season 🤝 pic.twitter.com/JOo99vVmRo

The Sharks have 12 games remaining in the 2020-21 regular season, for Marleau to add a bit of distance between he and Mr. Hockey. Regardless of the team you cheer for, a pretty impressive accomplishment.