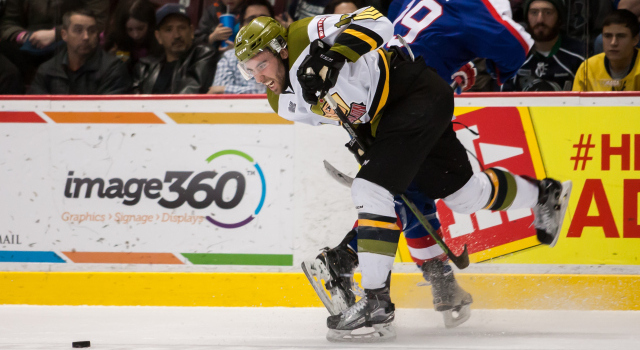 North Bay, Ontario, located northeast of Lake Huron on the shores of Lake Nipissing, is not exactly a convenient destination from Los Angeles, or, really, from much of North America.

So when Los Angeles Kings Vice President of Hockey Operations and Director of Player Personnel Mike Futa dropped in to congratulate 2014 third round draft pick Michael Amadio on signing his first professional contract and catch up with the responsible Kings prospect who has cultivated his scoring touch, he was hoping that the trip could be punctuated by a nice little milestone that the 19-year-old had been striving for in a breakthrough Ontario Hockey League season.

“I was there when he scored his 49th, and he had a shorthanded, kind of half-assed breakaway in the last minute to score his 50th, and he passed. And I was like, ‘I flew up all the way up here to see you pass, when you had a shot [for 50 goals]?’” Futa said, laughing.

“And then he promised me the next day he would get his 50th, and I had left, and he got his 50th. But he’s a very humble kid, he’s got a great family, and again, it was nice to congratulate him, but he knows how much work there lies ahead.”

Some of that work – prior to embarking on a professional career – includes advancing through the OHL playoffs, where Amadio’s North Bay Battalion are locked at one game apiece in a first round series against the Peterborough Petes.

“We challenged him to have a great finish to his season, and if things end, hopefully he’ll go down and extend his year with Ontario,” Futa said.

A great finish to his 2015-16 regular season followed a great start, a great middle and some great dog days. There hasn’t been much to pick apart in a season in which he finished ninth in the OHL with 98 points and fourth with 50 goals.

There are aspects that Amadio will look to fully develop in his own game, as Futa notes below. But in terms of the type of player the Kings have added to their prospect pool, there is plenty to be encouraged by when a player known for having a complete game at the junior hockey level breaks through offensively and posts dominant offensive numbers. Amadio’s 50 goals set a new North Bay / Brampton franchise record, breaking Wojtek Wolski’s record of 47 goals, set in 2005-06.

“It’s a weird one, because any time we saw him we identified him as a bigger kid that plays hard, he had good hands, but he was really always a kid that – like, sometimes in junior hockey, kids have no interest in playing away from the puck, and this was a kid who was really accountable away from the puck,” Futa said. “He plays for a coach (Stan Butler) in junior hockey that runs a great program with Brampton first, and now obviously with North Bay, and Stan’s always been an excellent teacher of defense and how, if you guys are going to be pros, and … if you want to be a Los Angeles King, you’ve got to know how to check. This is a guy who for the most part has really done a great job at taking care of his play away from the puck.”

“This year, on a team that didn’t score a lot of goals, he just took it to another level. The development guys, as per usual, did a great job with him, but it’s funny. He was a very quiet kid, and some kids are like this, like some of the times, Trevor Lewis is a little bit like this. Dwight King. They’re quiet around adults, and they almost seem a little introverted, but when they’re around their teammates, their true colors really shine through as far as their personalities almost exploding. What we challenged him to do, sometimes when he’s a little bland off the ice, it translates into a bland game. You start to see he’s a great kid, and it starts to come through his personality. Fortunately Stan and the Battalion there, they named him captain, and it was almost like a door or a box opening up where your true self kind of comes out. He lost his linemate early in the season to a serious injury, and that was kind of the guy who was supposed to be his one-two punch, and he just elevated things to another level. He didn’t cheat in his own end, but on a team that kind of doesn’t score a lot of goals, he just took it to another level, and he made plays in the games I was at, he’s got an excellent release, he shoots the puck. He probably is going to have to learn how to protect it a little better entering the offensive zone, but they’re all things that our guys teach in their sleep and become traits that give us the identity of our team, so I’m thrilled for him.”