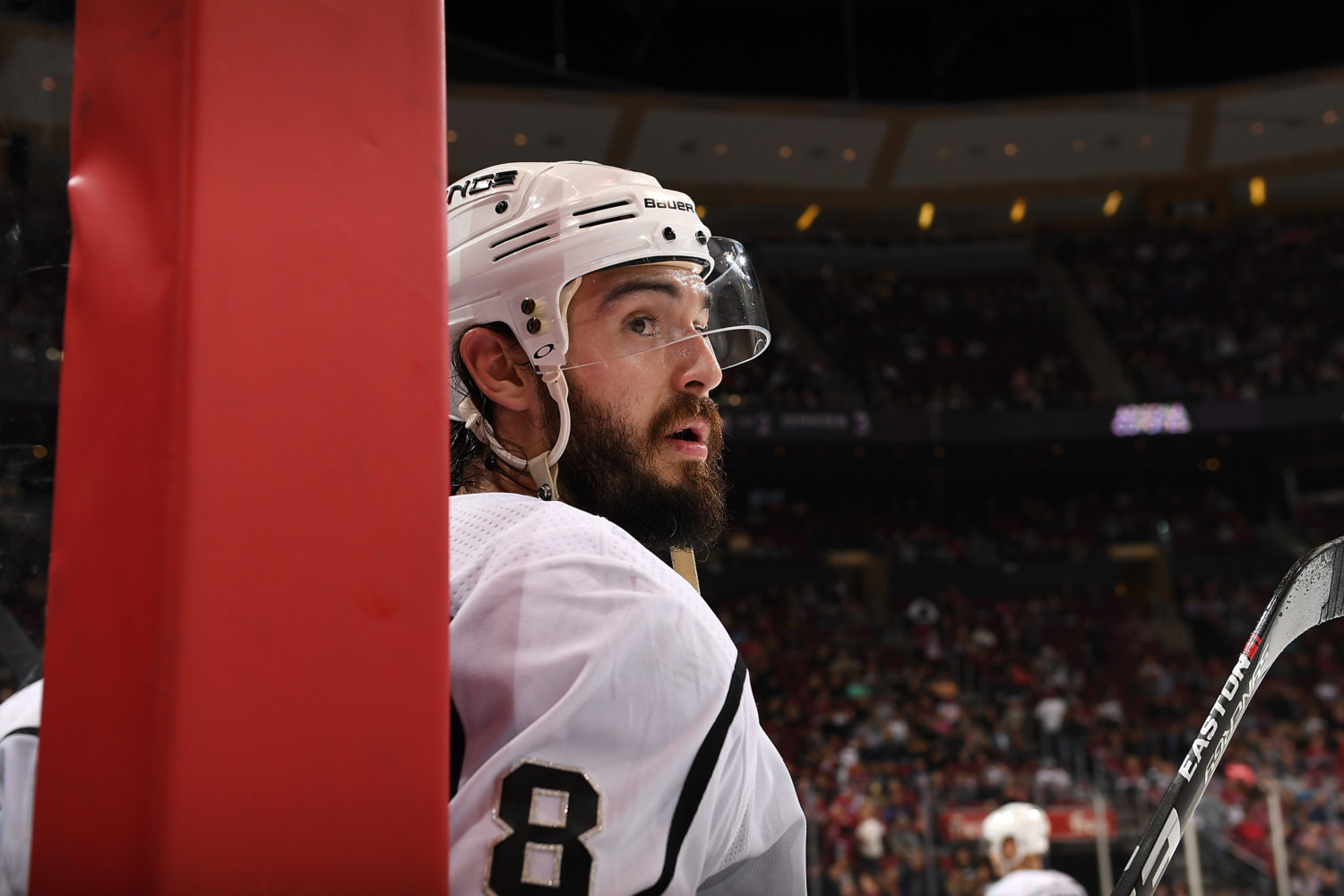 Drew Doughty has been suspended for one game due to his illegal check to William Carrier’s head, per a ruling by the NHL’s Department of Player Safety.

As hard as this is to accept for a team already short defensively, it’s not a particularly surprising verdict. The league has become more consistent with the enforcement of Rule 48, which will often elicit two-game suspensions in the regular season and one in the playoffs. Though Doughty’s shoulder grazes Carrier’s arm, there was substantial head contact. In the video, the Department of Player Safety outlines that “it is important to note that while Doughty’s first point of contact is with Carrier’s arm, the illegal check to the head rule does not take into account what the first point of contact is. Rather, the rule states, ‘a hit resulting in contact with an opponent’s head, where the head was the main point of contact, and such contact to the head was avoidable, is not permitted.’”

As for the angle of attack, the video articulates that Carrier “does not materially change the position of his body or head immediately prior to this hit in a way that significantly contributed to the head being the main point of contact.”

This is a massive blow, personnel-wise, for a team that was already without its top two minute-eaters on defense and will now be without the player who played over 100 minutes more than any other skater in the league.

“He’s the best defenseman in the league, so that’s a huge hole, but you deal with that when it comes,” Dustin Brown said earlier on Thursday when presented with the hypothetical that Doughty could miss Game 2. “It’s playoffs, so you find ways to win.”

It is not yet clear as to whether Jake Muzzin, who suffered an upper-body injury on March 26 against Calgary, will be available for Game 2. At practice on Thursday, Muzzin continued to wear an off-colored jersey, and John Stevens confirmed that he had not yet taken contact in his attempt to return.

Without Muzzin, and barring any roster moves, Kevin Gravel would be next in line to play Game 3. The versatile Gravel, who can play both sides of the ice, recorded three assists and a minus-three rating in 16 games this season with a Corsi-for percentage of 49.0%, courtesy of Natural Stat Trick. The 2015 Calder Cup champion has played 70 career regular season games but is yet to appear in a Stanley Cup Playoff game. He did not dress for 24 consecutive games in the second half of the season before logging 10:07 in a 4-2 home win over Arizona and 17:12 in a 5-4 home overtime win over Minnesota and is known for his skating and ability to play with pace.

“That’s why you work when you’re out of the lineup, is if your number’s called or your name’s called, you can step in and be ready to go,” Gravel told LA Kings Insider after Thursday’s practice. “Similar to the regular season when I was out for that little bit, you just do your work in practice and off the ice and stay as sharp as you can so when your number does get called that you can step in and fill your role and help your team win a game.”

Newly signed defenseman Daniel Brickley is practicing with the team but is not eligible to play in the postseason.

Friday’s Game 2 will be the first playoff game Doughty has missed in his career. That will leave Brown and Jonathan Quick as the only players who will have appeared in all 83 playoff games since the team’s 2010 return to the postseason when the puck drops Friday night.

Doughty had been fined early in the 2011-12 season for a cross-check on T.J. Oshie but had never been suspended in his 770 regular season and 82 postseason games.

Though the league has become more consistent in its crackdown on hits to the head, it will probably be hard for many to come to terms with this suspension when Duncan Keith received only one game for an unexpected behind-the-play slash to Jeff Carter’s face, or Dave Bolland launching himself at Mike Richards’ head, or Victor Hedman concussing Kyle Clifford with an elbow to the face.

S+But such what-abouts won’t be on the Kings mind when they look to collectively summon the effort and execution to win an important playoff game on Friday night.

“…[Doughty’s] a big part, and it’s got to be big contributions from everyone – not just the defense,” Tanner Pearson said when asked about Doughty’s potential absence after practice. “Everyone’s got to help out.” 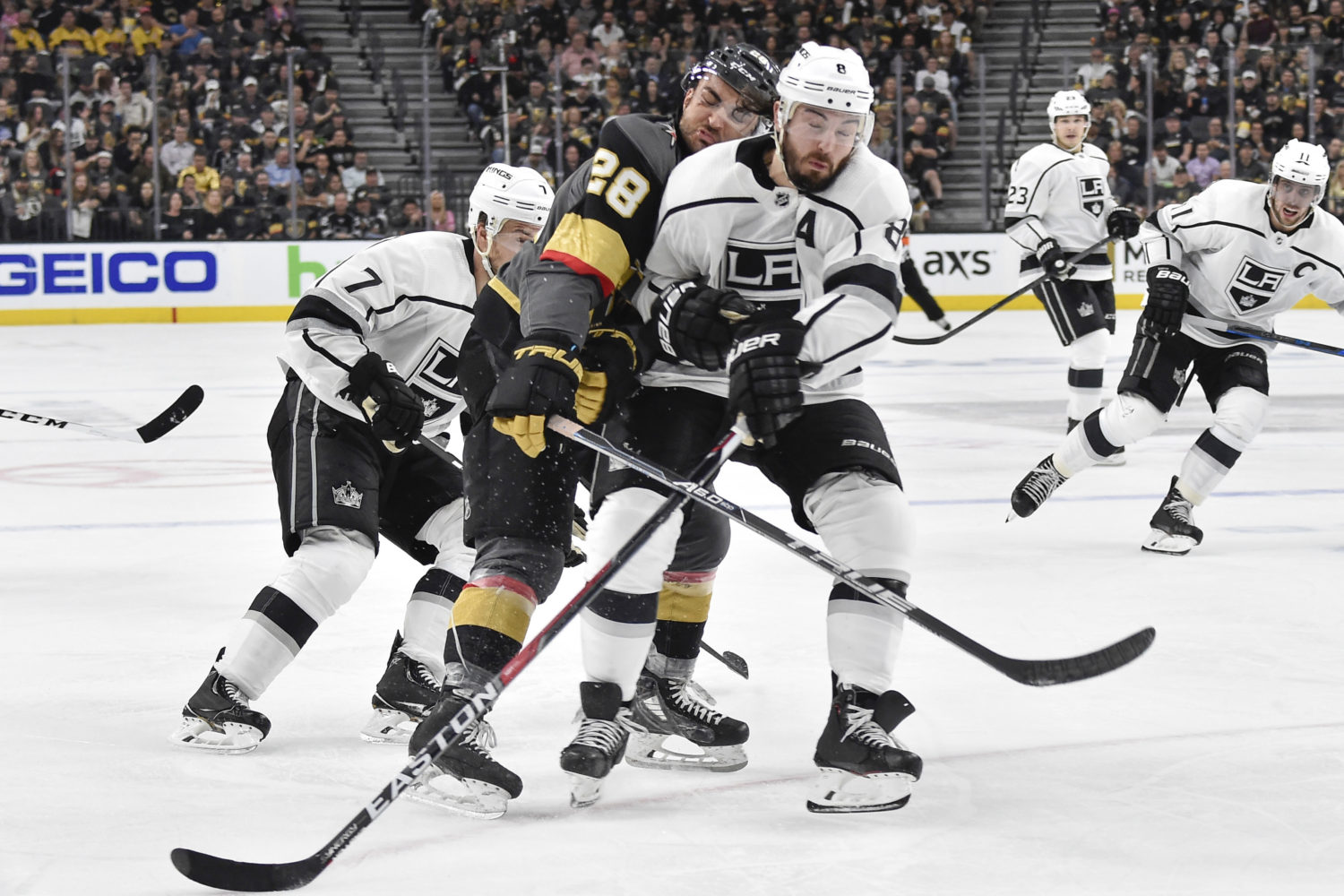