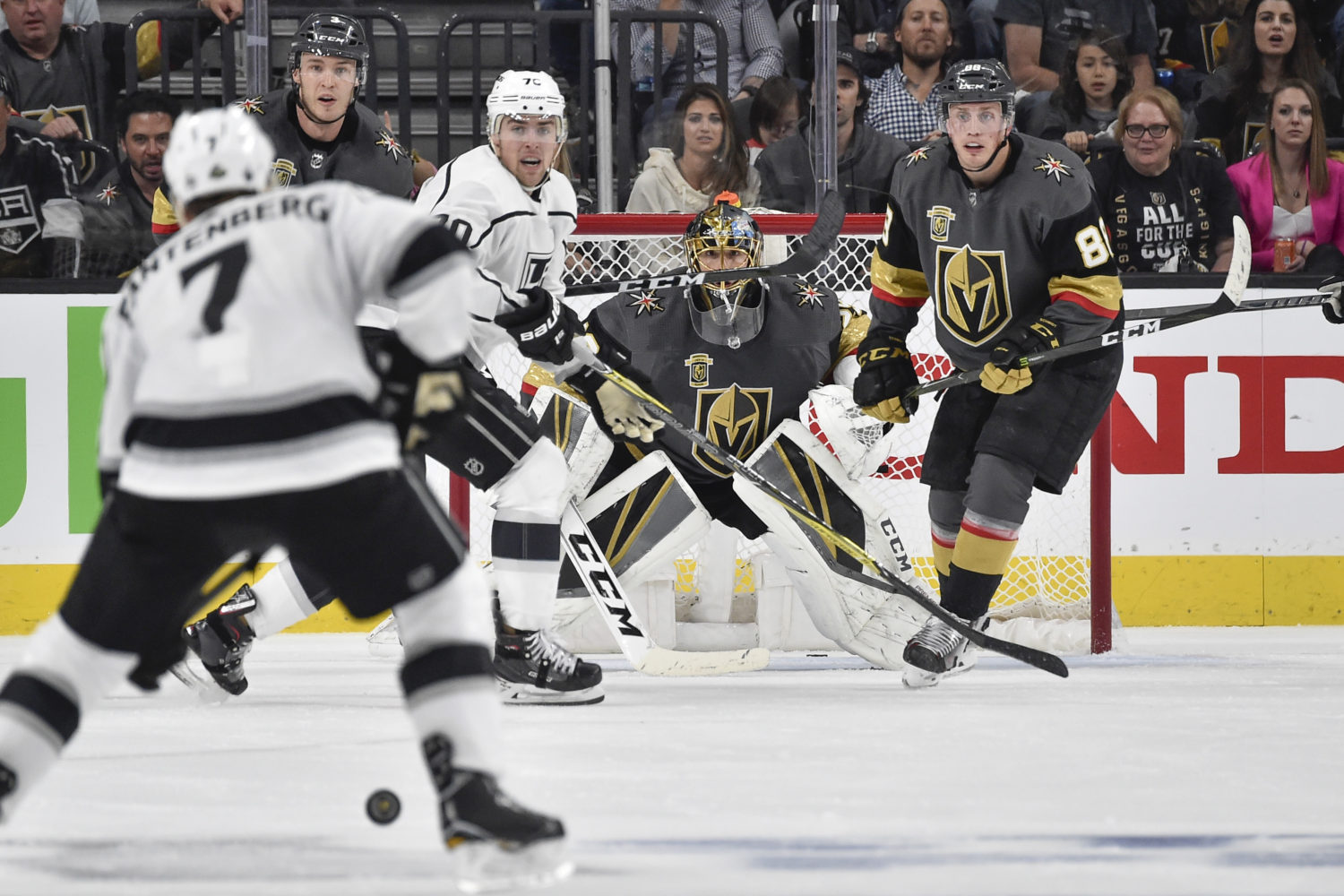 On whether he has an update on Jake Muzzin:
I don’t – only that he’s continued to progress along, get him on the ice. I have not talked to the trainers since he skated today. I think every day he’s getting closer, but what that means, I’m not sure yet. [Reporter: John, has he taken contact yet?] Not as of yet, no.

On how he’ll distribute ice time should Drew Doughty be suspended for Game 2:
You know what, we can spend a lot of time speculating about a lot of things right now. Until that’s an issue, which I’m certainly optimistic and hopeful it’s not, but if it is, then the next man up, obviously. But I can speculate about a lot of things. I’ve got a lot of things on top of that before I get to that point.

On what he liked and didn’t like about Game 1:
It’s a playoff game, and the intensity goes up, and I thought a lot of our guys’ intensity went up. I thought we had a lot of young guys that didn’t miss a beat in terms of the intensity of playoffs. At the end of the day, and just a general sense, I thought we did a pretty good job on their top players, but I thought their really working players created too much for them – not only momentum, but they created a lot of scoring chances for them, and that’s a two-pronged problem. We’ve got to contain their workers, but you know their top guys are going to get going, so we’ve got to continue to get better as a group. I didn’t think we gave up a whole lot, but I just thought those guys had too much momentum in a hockey game.

On ways to generate more offense:
I think there are some things we can do that allow us to spend more time in the offensive zone. I think we can generate more speed in the first two zones that’s going to allow us to do that. It’s interesting to me – I thought both penalties were good, hard hockey plays going to the net where we got a goalie interference penalty and the other play where Lewie’s just fighting for position a t the net. I think we need a lot more of that. We’ve got to make it a lot tougher on Fleury than we did last night. Got to spend more time there, we’ve certainly got to spend more traffic in front of him and more plays like that. We saw Brownie go to the blue paint and stop. You’ve got Lewie fighting for position at net-front. That’s going to allow more pucks to get to the net and make his job a little more difficult.

On how the Kings managed the puck in all zones:
That’s a pretty long question, to be honest with you. I think we can move the puck better out of our zone. I think we can do a better job moving the puck in transition, so in terms of manging the puck, I think we can do a better job, probably more so in transition than break out. They check well. They attack with speed with the puck, but they check well because they have a lot of speed that gets over top of you in a hurry. I think managing the puck’s going to go a long way to less time in our zone, more time in theirs.

On the last playoff games he coached:
As a head coach? When I was in Philadelphia, we met Pittsburgh in the playoffs two years in a row. Once was in the Conference Final, the next year was in the first round. They lost in the finals and then won the Cup. I think coaching’s coaching. It wasn’t that long ago here i was in a different position, obviously primarily working with the D, but it felt really good to be back in, I think for the players and for us, back in that environment with the intensity and both teams playing hard and the building the way it was. It was kind of exciting for us to be back in that position, so we’re looking forward to the challenge in front of us.

On where the game ranked on a physicality scale:
I thought there was good intensity. I think you’ve got two teams that played a real good hard, honest game. That’s the way my interpretation was of it. I think both teams upped their intensity. I think both teams understand the importance of their battle on the puck, and there’s usually some kind of physical confrontation that comes from that. I mean, you don’t want to run out of your way to get hits, but certainly if you’re getting to an area of the ice that’s confined where you can push a guy off the puck, it’s going to help your chances of coming up with the puck and getting off the wall. I wouldn’t say it’s the most physical playoff game I’ve ever seen, but I think to me that’s what’s expected come this time of year. I think both teams are emotionally invested, and that’s what happens when both teams are emotionally invested.

On whether the core is enough removed from championships that adversity experience matters less:
No, I think the people in this room are important. You don’t win with players, you win with people, and you win with people that care, and we’ve got an awful lot of people here that care. We’ve had adversity all year. We lost Jeff Carter for most of the year. Marty started the year on the sidelines. It’s not as if we haven’t had issues with next-man-up scenarios this year. We’ve asked a young kid in Kempe to come in early in the year, play a new position and play against top people. We’ve had some young people come into our lineup that are getting an opportunity to make a difference, and that’s the way we look at it. In Forbs and Muzz going out going into the playoffs, we just need other people to pick up the slack by committee, and that’s no different than any other team. There’s lots of teams that have been without key people. Pretty much every team in the league you can talk about that’s the case, and Vegas is no different. We’re not going to sit here and make excuses. We have good people in the room, we know we need to play better, and that’s exactly what we intend to do.

On what it’s like to coach against Gerard Gallant, who isn’t as inclined to match lines:
Well, he’s done a good job of it, I’ll tell you that. From a fellow coach, you’ve got to really admire the job that he’s done this year. You can just give him the award right now, quite honestly. He’s done a terrific job, and I think he’s had a lot of success in his career both as a player and a coach at all levels, and he won the championship in junior a few times. I think he trusts his players in a lot of situations. He doesn’t pull players off the ice – ‘hey, you can’t be on the ice with this guy or that guy,’ – but he’s really entrusted his players with responsibility of playing the game they want to play, and I think we’re a lot the same. We’re going to trust our players and worry more about our team in terms of what we’re trying to do in pace and execution and get the right people in the ice in the situations we want them to more so than hard match-up with Karlsson against Kopi. We didn’t see that last night, but whatever he’s doing, he’s pushed a lot of buttons that were right this year and deserves a lot of credit for doing so.