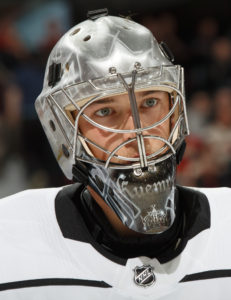 The good: Darcy Kuemper, penciled into the starters role when the Kings signed him as an unrestricted free agent after five seasons with Minnesota, provided immediate dividends and was a prime factor in the Kings’ ability to appropriately balance Jonathan Quick’s starts and keep him at a high level for much of the season. With Kuemper’s excellent play, which was maintained after his trade to Arizona by Jack Campbell’s strong minutes, the Kings rose from a 23rd place tie with a .905 team save percentage to third in the league at .920. That can’t be pinned entirely on the back-ups – Quick was mostly very, very good, especially through the first three months of the season – but allowed the Kings to hit a bulls-eye on the number of games they were hoping Quick would start. Throughout the entire year, John Stevens alluded to a number of starts he had in mind for Quick, and because of Kuemper’s standout play in net, Los Angeles, throughout the season, was right in lockstep with the balance they’d envisioned.

Kuemper, a former CHL goalie of the year, had worked with Bill Ranford during his abbreviated stint with ECHL-Ontario in 2011-12 while under contract to Minnesota and re-established his relationship early in training camp. The two worked on his post work and work behind the net and technical aspects related to the team’s situational play that boosted Kuemper’s comfort level. “He’s been a huge help all year for me,” Kuemper said in February, two and a half weeks before his trade. With the exception of the game at Tampa Bay in February and perhaps one or two more periods, he gave the Kings a chance to win every time he took the ice and posted shutouts in back-to-back outings on January 30 at Dallas and February 3 versus Arizona, part of a stretch in which he concluded his Kings tenure by winning five consecutive decisions. Between Kuemper and Campbell, Kings backups earned points in 17 of their 18 decisions. That’s pretty remarkable, given the nature of the back-up position in which it’s a challenge to develop consistency and getting good work in practice becomes paramount. “It’s a tough job as a back-up,” Stevens said in January. “If I gave you a job description of a back-up goalie or a seventh defenseman you’d probably turn it down, right? To ask you to work your ass off every day and be ready to play and maybe play a limited time, a lot of guys would hand it back to you and move on and do something else, but he’s got the right mindset. He’s got really good personality, he works hard at his game, he stays sharp, he uses practices to stay ready and it’s worked for him well. He’s done a good job with it.”

The bad: Nothing, really. As the back-up, he sported a .942 save percentage a week and a half before he was traded. There’s the uncomfortable fact that Kuemper now plays for a divisional rival poised to easily surpass its 2017-18 points total, but we’re not evaluating on Coyotes futures here. In 2017-18, while with the Kings, he did everything in his power to help the team win games and sported a .932 save percentage that ranked second among individual seasons in franchise history among goalies with a minimum 15 games played.

Going forward: Kuemper was not going to re-sign with Los Angeles and had played himself into a wider role than the one available at Staples Center, so the Kings traded him to Arizona in exchange for fellow rentals in Toby Rieder and Scott Wedgewood. After signing a two-year extension that carries a $1.85-million AAV, Kuemper learned that tending goal behind the Coyotes was a touch more complicated than tending goal behind highly structured and defensive teams like Los Angeles and Minnesota. He’s still better than his 2-6-2 record and .899 save percentage in Arizona and will open up the season as the Coyotes’ 1B option behind Antti Raanta. 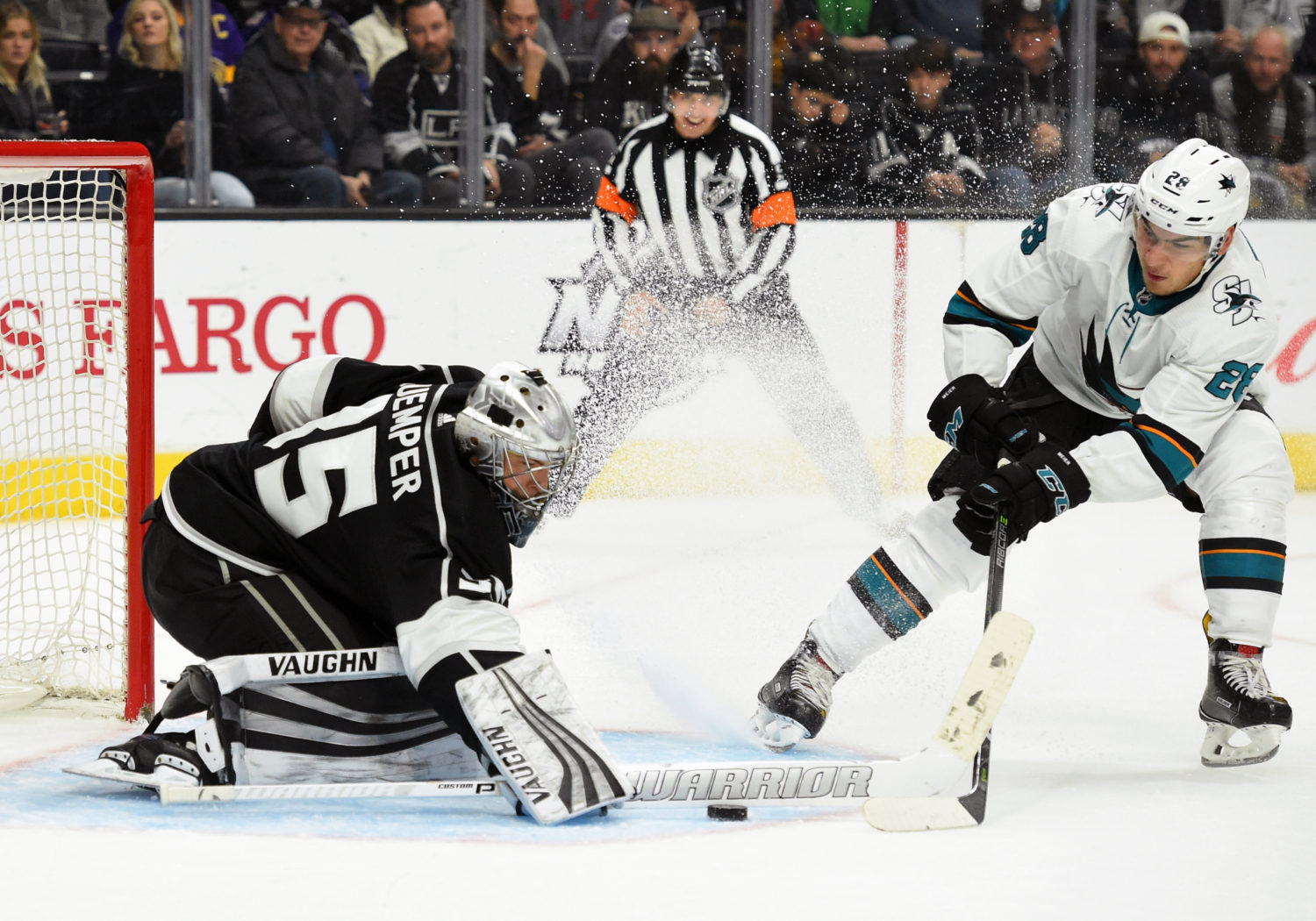 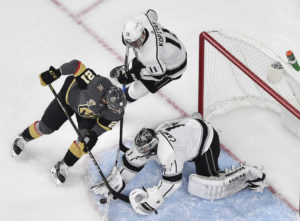 The good: In a limited but important sample, Jack Campbell extended the position’s post-Kuemper reliability and did so without any sort of kid gloves. He made his first NHL start in four and a half years when he stopped 41 of 42 Vegas shots in a 4-1 win at T-Mobile Arena on February 27 and practically willed Los Angeles to an important point at Winnipeg on March 20 when he stopped 36 of 37 before he was beaten by Kyle Connor in overtime. He did so, based on first-hand and universal accounts, with an attitude the Kings would like to bottle up and replicate across the sport. It’s an important disposition for a back-up goaltender to have – and one also possessed by Kuemper, who may have to battle Campbell for the Happiest Man In Springfield Award – and helped continue to build his relationship with Jonathan Quick, who took Campbell to Las Vegas for the NHL Awards as a guest. (Campbell even sported a towel around his neck and a Kings baseball cap while reprising his role as Quick’s backup at the awards ceremony.) Campbell’s emergence late in the season was well deserved for a player who had dealt with doubt and other mental challenges earlier in his career before he was able to reset and avoid outside noise upon joining the Kings and building his relationships with Dusty Imoo and Bill Ranford. His first career win – the Vegas win mentioned above – was a story that meant so much to Campbell, Imoo and Ranford and precipitated its own Black and White episode. “I mean, for me it was a little bit more than just another game,” Campbell said after his win at Vegas. “Of course I want to prove to everybody, but most importantly my teammates, that they can count on me. So, it was kind of weird because this was probably the biggest game I’ve played in and I felt the most comfortable just because of the surroundings and the locker room. Quickie was there to give me some tips on what their tendencies were and the boys played great in front of me, so it was awesome.”

The bad: Bizarrely, Campbell’s all-situational save percentage was higher than his even strength save percentage. Perhaps this belongs in “the good,” but Campbell stopped all 23 shots he faced while shorthanded. As a result, given the small sample, his even strength save percentage was only .900. I wouldn’t chalk this up to much more than a mere blip when trying to evaluate only 267 minutes of goalie data. In March, Campbell also spoke about working with Ranford to narrow his stance so that he’s more equipped to explode from side to side to deny the back seam.

Going forward: Campbell signed a two-year extension in November that will pay him an average of $675,000 per year. He’ll vie for the opportunity to be Jonathan Quick’s understudy over that time, a competition he’s expected to win in 2018-19 before Cal Petersen more concertedly factors into the goaltending equation. Petersen, who will share the crease in Ontario with Peter Budaj, may debut this coming season but won’t be expected to seriously contend for a more regular roster spot until 2019-20. The back-up role will be based primarily on merit, though waivers, as always, will factor into personnel decisions out of camp. (Campbell would have to clear waivers, whereas Petersen, as of this season, wouldn’t.) This opportunity will be a long time coming for Campbell, who was among the players to remain back in Los Angeles for the summer and worked hard on his cerebral approach as well as his technique to put himself in prime position to continue to benefit from his 2016 trade to the Kings. 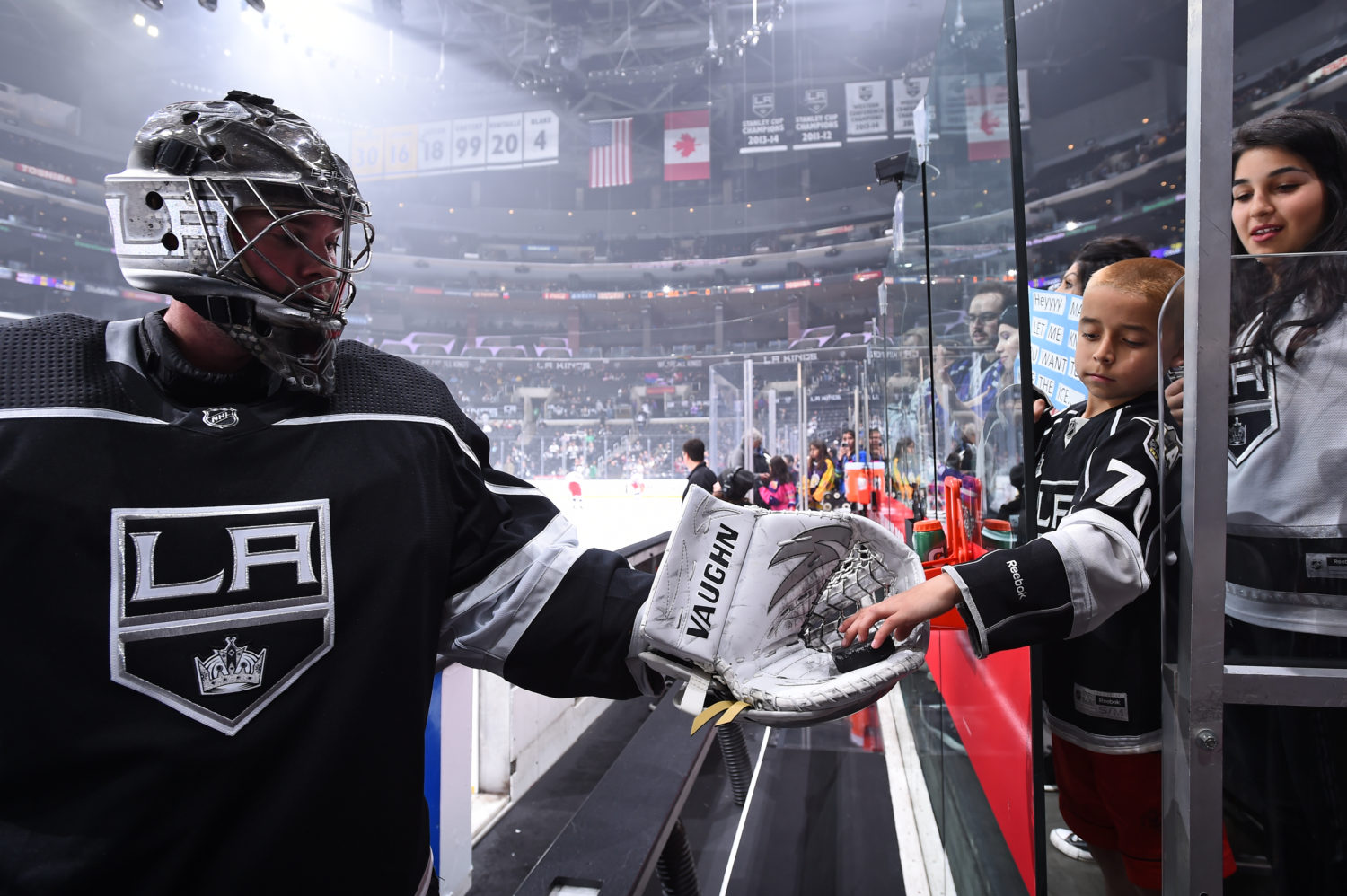