Lousy Smarch weather, Insiders. In advance of tonight’s game against the Columbus Blue Jackets (7:30 p.m. / FOX Sports West / FOX Sports GO / FUBO TV / KABC 790 / I Heart Radio), the Kings held a 10:00 a.m. practice at Toyota Sports Center. Alex Iafallo was the first skater on the ice and got some shooting work in with Pierre Turgeon and was joined shortly thereafter. After some power play breakout work – units appeared to be Brown-Kopitar-Carter//Phaneuf-Doughty and Pearson-Kempe-Toffoli//Muzzin-Martinez – the lined up as such:

-Jonathan Quick was the first goalie off the ice and will be expected to start against Columbus. He’s 15-6-0 with a 2.14 goals-against average and a .912 save percentage in his career against the Blue Jackets. Extra skaters who remained on the ice for extra work were Andy Andreoff, Kevin Gravel, Paul LaDue aaaaannd…

-…Trevor Lewis. The injured Kings forward who has missed the last 10 games with an upper-body injury took the ice at the outset of the skate in a yellow, non-contact jersey. He provided some resistance in the power play breakout drill and also warmed Jonathan Quick up with a quick succession of shots. “He’s only been able to skate on his own for quite a while, and they felt he got to the point now where he can get involved with some drills,” John Stevens said. “He wasn’t able to shoot for a while, and now he’s back shooting. It looks like he’s shooting the puck well. It’s a big step for him. He’s not adding contact yet, but he’s able to skate with the team, and I think that’s important for him, just to get some touches in and get some of his timing back. He’s been able to skate quite a bit, which means he keeps his legs underneath him. He’s a lot further along than he was, just like Jeff. I don’t know what his timetable is yet, but we’ve got to get him some contact first to see how he responds to that. I wouldn’t even call him day-to-day at this point – I think he’s a little longer than that.”

-As for the Blue Jackets, Nick Foligno is expected to return to the lineup after missing four games with a lower-body injury. Coming off a 5-1 home win over Washington, Los Angeles will get a good look at Columbus reinforcements defenseman Ian Cole and forwards Thomas Vanek and Mark Letestu, though rugged forward Josh Anderson remains out with a knee sprain. Joonas Korpisalo, who has never faced the Kings in his career but was part of the 2015-16 Lake Erie Monsters championship team that eliminated the Ontario Reign in the Western Conference Final of the Calder Cup, is expected to start in goal, per Jackets Insider Brian Hedger. Reigning, two-time Vezina Trophy winner Sergei Bobrovsky will be expected to start tomorrow in Anaheim.

-Join the Kings for Pride Night tonight. Click here to purchase tickets through the Kings and receive a pair of LA Kings Pride Night socks. And then, click here to learn how personal experiences have guided Dustin Brown, the Kings’ Hockey is for Everyone ambassador, into being an LGBTQ ally.

-Good news for Seattle’s push to land an NHL team: on its first day of accepting down payments, the Oak View Group said it acquired 10,000 season ticket deposits in 12 minutes and surpassed 25,000 in “a little over an hour,” according to the Seattle Times.

During his four years with the WHL’s Thunderbirds, Nate Thompson learned firsthand that the Emerald City could thrive as a viable NHL city in a crowded sports space.

“Playing there for four years in junior, it’s not a ‘hockey town,’ per se, but there’s a lot of teams in the league that aren’t hockey towns that flourish,” he said. “Look at a team like Tampa – you wouldn’t portray that as a hockey town, but they’re selling out every night and doing extremely well. I think with the city and how the fans have gravitated towards the Seahawks and the Seattle Sounders and how they really embrace their team there, I don’t see it being any different with an NHL team.”

While playing for the T-Birds, Thompson played at Key Arena, which was renovated in the mid-1990’s to more fully accommodate basketball, which resulted in interesting quirks and occasionally wonky sightlines. But with $600-million reportedly pouring into the facility, the expectation is that Key Arena will evolve into a state-of-the-art multi-purpose arena that should be able to accommodate hockey better than it did prior to the Thunderbirds’ departure for the southern suburbs in 2008.

“Creating an atmosphere just for hockey I think will make a world of difference,” Thompson said.

The rink would continue to be a cornerstone of Seattle Center, the museum-dotted exposition space and site of the 1962 World’s Fair, and located adjacent to Lower Queen Anne, which features a quality array of dining and nightlife options and is one of the most popular young neighborhoods in the city. It’s not hard to think of Seattle as a favored stop along the NHL’s circuit.

“I’d put it right up there,” Thompson said. “Seattle’s a great city. I think it’s very similar to Vancouver, and I know a lot of guys like playing in Vancouver, so I think it’ll be a lot of fun.”

-At 26, Jack Campbell is five years older than when he was 21 and made his only prior NHL start. As such, the pre-game jitters were toned down and replaced by simple excitement.

It also helped that he kept his routine and was able to get in a good nap back at the hotel.

“I probably got the best the nap in ever,” he said. “That surprised me a little bit because I was so excited. I think with age, obviously I’m not 20 anymore, so I’m able to put things in perspective and just relax.”

“The guys in the room, it wasn’t that they were trying to make me feel comfortable. Just naturally, it’s a winning group in here. I wasn’t too nervous. I just knew they’d do their jobs, and they did great, so it was a lot of fun. 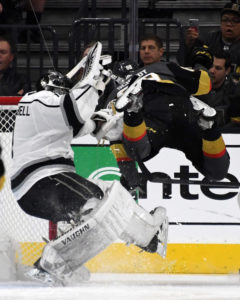 He went on to stop 41 of 42 shots in the 4-1 win, which opened up with Nate Schmidt driving the crease and crashing into him 28 seconds into the game.

“Yeah, that’ll get you going. I like a little contact, so it was good,” Campbell said. “But, yeah, he didn’t mean to. That just shows how quick they come. A minute into the game there, they’re trying to come in on an odd-man rush. It was good for our team to get a power play early.”

After an off-day Wednesday, Campbell was back at the rink on Thursday to break down what worked and what didn’t work from his first star performance. The video followed the traditional calls and texts from Goaltender Development Dusty Imoo after virtually every game.

“Between Dusty and Billy when I got here, I still have a lot of work to do. It’s a good win and everything, but when I looked at the game, there are still so many areas that I’ve got to work on to be a good goalie at this level,” Campbell said. “[Dusty] texted me. It was a really cool moment, because without him, I wouldn’t have gotten here.”

There was plenty of fine-tuning to address via video, but also lots of positive reinforcement following the standout performance.

“My tracking, my rebound control was on point that night,” Campbell said. “My puck-handling, I thought I was going to have trouble with the puck-handling just because the speed of the game, especially with Vegas and how quick they are, and when I was watching the game the night before, which I think was a luxury to have, to be able to watch Quickie in there, they came really hard at him, so I was expecting that. Maybe it was because of the back-to-back or whatnot, but they gave me a little more time than I thought I was going to have, and the guys just made it easy by being real loud back there to tell me what play call to use. The areas I’ve got to work on, they’re so good at this level at finding that back seam. I’ve got to really work on narrowing my stance. Billy and I went over that today and just being able to explode over. Worked on it today, and it already feels a little better. I’ve got a long ways to go, but it’s exciting.”

“Honestly, it was just a huge game for our team, and it was great to get four points against those guys. They’re a really good team. We’re feeling good right now with how we played. For me personally, I just always want to win, so it feels great, and to do it with these guys is awesome.”

-The latest LA Kings Weekly airs after tonight’s game, courtesy of the good work put in by Alex Curry and Jack Wilson. In addition to stories on Pete Demers and LA Kings Fantasy Camp, there’s also this behind-the-scenes look of The United States’ Women’s National Team’s appearance at Monday’s overtime win over the Golden Knights: