Insiders! Good afternoon to you. Lots to go over today.

-For the first time since reconvening after the Christmas break, the Kings held an optional skate. There were no line rushes. Darcy Kuemper was the only goalie on the ice. After 20 minutes or so, I headed downstairs toward the team area to poke around for Robyn Regehr. More on that in a moment.

-Christian Folin (IR/upper-body) is very close to returning. “Hopefully before the break,” he said. Los Angeles has two games remaining before the bye week – one at Calgary tomorrow, and one at home versus Nashville on Saturday. He’s no longer in pain, which is a good thing. He also shed his off-color no-contact jersey worn earlier in the road trip.

-Patrick Maroon received a two-game suspension for his hit on Drew Doughty last night, deemed by the Department of Player Safety to be interference. Via the video:

“It is important to note that Doughty never touches the puck and therefore is never eligible to be checked on this play. While we understand that Maroon reasonably anticipated that Doughty would get the puck, the onus is on the hitter to ensure the player he is hitting is eligible to be checked, and that the hit is delivered legally. On this play, at the moment Maroon commits to the hit, the puck is in the possession of McDavid. Maroon’s belief that Doughty might gain possession of the puck, however reasonable, does not excuse him from responsibility when he hits a player who is not eligible to be checked. Finally, in addition to this being interference, what causes this hit to rise to the level of supplemental discipline is the significant force and the substantial head contact that occurs.”

It’s not only Jonathan Quick. Darcy Kuemper is yet to lose in regulation. He boasts robust numbers that include a 2.11 goals-against average, a .934 save percentage and one shutout over eight starts. But Los Angeles’ last back-to-back was at the two New York teams on December 15-16, and they don’t have another set until hosting Pittsburgh and visiting Anaheim on January 18-19.

That’s not to say that Kuemper only gets nods during back-to-backs; he has two starts this season in games that were stand-alone outings: November 4 versus Nashville, and December 7 versus Ottawa. But Quick is coming off a shutout, and in advance of the bye week, there’s an off-day and another Predators game. Quick has started six in a row and has been the team’s MVP this year. How does John Stevens plan on balancing the two goaltenders knowing he’s in a month-long stretch in which the team isn’t playing back-to-back games?

“We haven’t looked too far ahead,” he said. “We haven’t looked at the schedule and said, ‘hey, he’s getting this game and he’s getting that game.’ We try to manage it as we move along. We’re on the road. I think when you have back-to-back situations, it becomes easy. We have had situations this year, one of them was an afternoon game and we thought it just looked like a good spot for Darcy to play in for a variety of reasons. We had a home game against Nashville that looked like a good spot to put him in. We’re looking at Jonathan, Jonathan’s one of our best players, and we’re going to make sure that we manage his fatigue. When he’s sharp and playing really well, we’re not just going to take him out of the net to take him out of the net. I think Darcy understands that, and we have a lot of confidence that Darcy can come in and play. The schedule sometimes is going to dictate how that unfolds, and obviously performance will, too. Well, I don’t think performance has been an issue with either one of our guys, so it’s more about schedule, managing fatigue, a big stretch of divisional games – all that stuff comes in to play with it. Former records. We’re not going to try and push a guy in and out of the lineup just to get him in and out of the lineup, but we are going to make sure that Darcy stays sharp and is ready to go in when his name is called.”

-More good stuff from Stevens in Elliotte Friedmans 31 thoughts, which were published today.

-My recollection of the details was a bit hazy, but I remembered watching a Kings-Oilers game when I was around 10 years old and hearing Bob Miller’s call of a game the Kings led 6-3 in the third period, but lost, 7-6, after Marty McSorley was dinged with a five-minute high-sticking major. Vladimir Ruzicka, Petr Klima and Jari Kurri scored on the man advantage, and Glenn Anderson scored the game-winner with 4:54 to play, wasting a Dave Taylor hat trick and three-point efforts from Luc Robitaille and Todd Elik. The two teams combined for 13 goals on 63 shots. Bill Ranford, who would win the Conn Smythe Trophy some five months later, earned the win with a 14-of-20 performance. Smythe Division hockey!

The game was played on January 25, 1990. I wasn’t quite nine. We can finally put that game to bed. Anyone else hold any 28-year-old grudges? Stick tap to Actual Insider Kenny44 for finding this.

-A familiar face was spotted around the Kings’ areas at the Scotiabank Saddledome on Wednesday. 2014 Stanley Cup champion Robyn Regehr is often at Calgary games, and when Los Angeles passes through, it hasn’t been uncommon to see him downstairs outside of the dressing room after the game.

Regehr is a hockey dad, and both of his boys are still out of school this week. They were all welcomed guests at today’s skate and spent some time around the players and coaches.

“He actually contacted me a while ago and just said, ‘is it OK if I bring the boys by?,’ and of course we’d love to see him, and then he texted me this morning at breakfast and just asked if we were practicing,” Stevens said. “Guys are always excited to see a former teammate and a guy that won a Cup here and was a big part of our team. He still looks really good, too. He looked like he could still play, but he’s just a ferocious competitor, a really good pro and played the game as hard as anybody. It was good seeing him.” 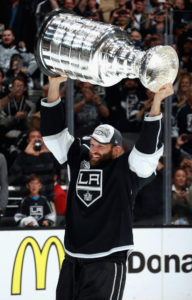 Regehr, who turns 38 in April, played his final game at the end of the 2014-15 season. The former Flame, Sabre and King now devotes his full attention as a partner to Blueline Oilfield Rentals, a company that he helped construct with founder Doyle Townsend that “provides top quality rental equipment for use in exploration and drilling with a primary focus on Heavy Weight Drill Pipe Rentals.”

“This is our busy season. Winter is the drilling season up here in Canada,” Regehr said. “Everything freezes up and people can get around access-wise, so it’s very busy. The programs have started up and we’re starting to see a bit of a recovery in the oil and gas sector here in Canada and in general. So, it’s very positive that way.”

2017 was a rebound year for the Alberta economy after oil prices plummeted earlier this decade, leading to a challenging commercial environment just as Regehr was hanging up his skates. But it has still been a smooth transition from his playing days. He’s still a very popular figure in Flames history who was the inaugural recipient of the Flames’ J.R. “Bud” McCaig Award, bestowed annually to a player who exemplifies “virtues of respect, courtesy and compassion.” Whether he was a Flame, a Sabre or a King, he was a very popular figure in his team’s dressing room.

Regehr ranks second in Calgary history with 826 games played as a Flame. After 105 games in Buffalo, his 158-game Los Angeles tenure served as “a really nice way to kind of end a career” and allowed him to lift the Stanley Cup at Staples Center on June 13, 2014.

“At the end of my career, all I wanted to do was be a part of a winning team, and I was fortunate that I had that ability,” he said. “And, playing hockey in Los Angeles for that team and that area, it just was a perfect way for me to end a career. You know, being at the rink was great, but also being away from the rink, you’re outside all the time, you’re active, it’s a great spot. And we really enjoyed it and just very, very positive friendships and experiences that we had down in Los Angeles.”

“I do miss certain things with hockey. And that was, for me, that was the physical and competitive aspect of the sport. And you know I know that now being involved in a business, I’m in a competition, but it’s in a different way than it was with hockey. I really enjoyed a coach for me in hockey. It’s your job to play against that line tonight and shut them down. That was a personal challenge for me, and I don’t really get that anymore, but I’m okay with that. It’s a matter of channeling that energy and competitiveness into other things and then being involved with other things with the kids and that. So, it’s just kind of an evolution of how things go. But, it’s still fun to come down and visit with some of the players that still know and see how they’re doing.”