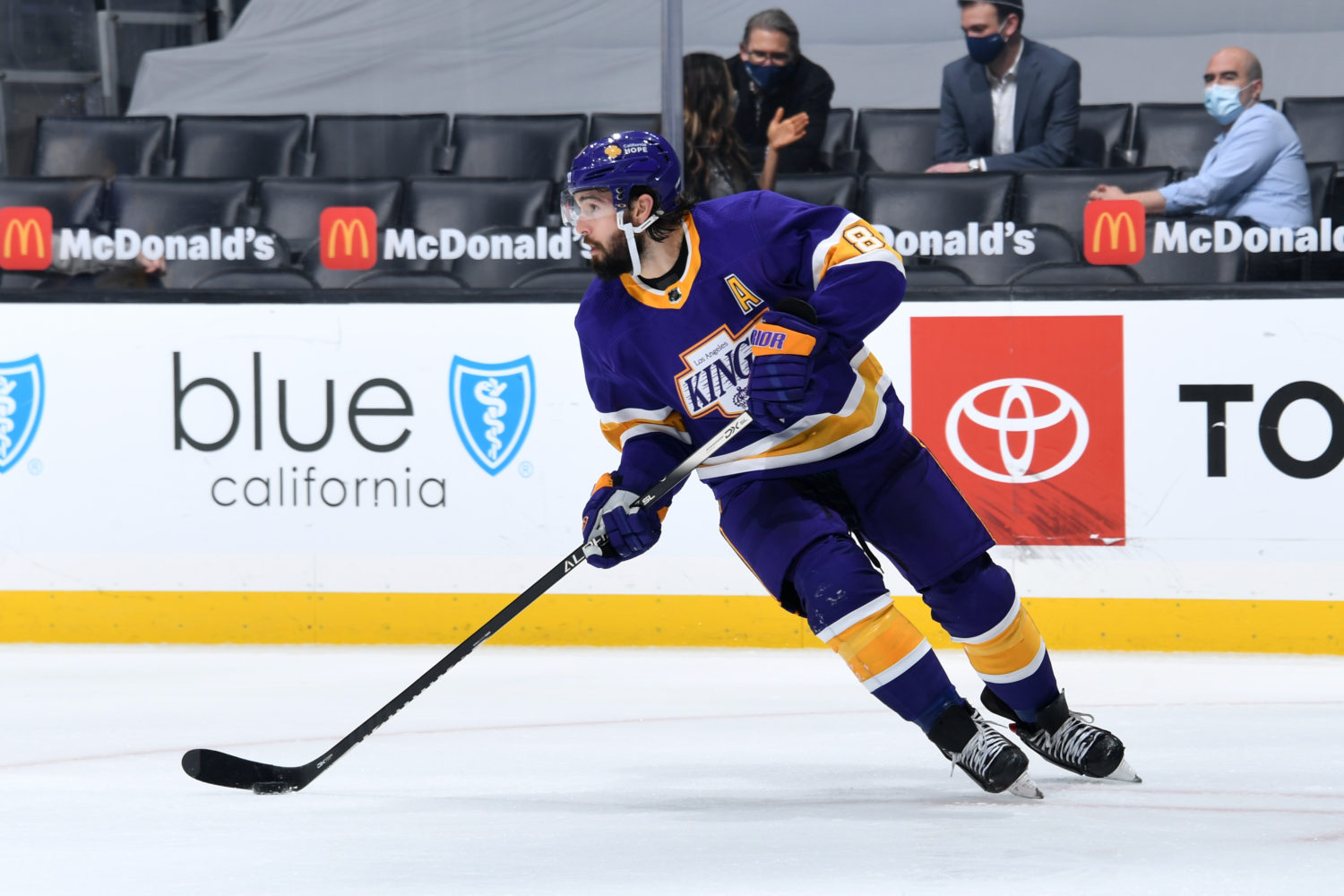 The seasons in review roll on!

Last week, we examined the organization’s two goaltenders, which can be found here for Cal Petersen and Jonathan Quick. This week, we take a look at the right-shot defensemen, starting today with Drew Doughty.

By most accounts, Drew Doughty had a good season. Starting with his extended time off, between the cut-short 2019-20 and delayed 2020-21, Doughty had a great summer, which showed up on the ice throughout the season. After what many called a pair of down years, Doughty had a big 2020-21 campaign. Up through the final published edition, Doughty was mentioned as a Norris contender from the West Division in NHL.com’s Trophy Tracker. Entering the season, many might have had Doughty omitted from a projected Team Canada Olympic roster. Now, it’d be tough to find one without him.

“He’s had an outstanding season, a really, really good season in my mind, on both sides of the puck,” Todd McLellan said of his number-one defenseman. “I know that he doesn’t want to give it away in the last 5,6 games here, he wants to be a high-end performer. There’s still eyes on him for that special event that’s going to happen next winter, I think he has a great chance of playing on that team, so he wants to finish the season well and we want to use him the way we’ve always used him.”

A lot of plus signs for Doughty in those metrics, which show how much of a standout he was in most areas. Doughty nearly matched last season’s raw production in 11 fewer games, falling just one point shy in the shortened season, and that’s when you consider he had just one point from his final 10, after the Kings were all but eliminated. At .61 points-per-game, Doughty posted the fourth-best offensive season of his career, while his possession metrics were improved across the board from the 2018-19 and 2019-20 seasons.

Trending Up – You could measure it by any number of factors, but Doughty was back in a big way this season.

No Kings defenseman posted stronger metrics in terms of shot attempts, scoring chances and high-danger chances than Doughty did this season.

Starting on the defensive side of the puck, among defensemen that logged 1,000 or more 5-on-5 minutes this season, Doughty ranked fourth in fewest shot attempts conceded per 60 minutes. When compared relative to his teammates, his numbers look even stronger. Just two defensemen across the NHL with at least 40 games played had a better Corsi Against, relative to their teammates, than Doughty. Scoring chances against? He ranked sixth and the same can be said for high-danger chances. It’s no secret that Doughty takes pride in the defensive side of his game, and his shot suppression numbers this season were excellent.

“My defensive game is my most proud attribute, especially this season, I think I’ve been really good in that department,” Doughty said around the midway mark of the season. “I know I’m getting points, you see the recognition, but my defensive game is my specialty, and I take a lot of pride in that.”

Offensively, Doughty was good. He was slightly above the team average in all three aforementioned categories for, as he put together one of his best offensive seasons from a production standpoint. Running a power play that was, for the first half of the season, extremely effective, Doughty produced at one of the highest rates of his NHL career. His six power-play goals were tied for the most in the NHL by a defenseman and he was among the league leaders in shot attempts on the PP. Offensively as a whole, Doughty ranked inside the Top 10 in several categories for the majority of the season, before eventually landing just outside.

Looking at all of this within the lens of context, Doughty had a strong effort, while playing with a rookie defenseman, albeit an impressive one, as his partner for nearly the entirety of the season. Doughty and Mikey Anderson formed an effective top pairing, which showcased Doughty’s ability to make those around him better, as Anderson spoke to several times throughout the course of the season. It also reaffirmed Doughty’s leadership ability, how he was able to work with some of the younger defensemen around him and play effectively.

Finally, it’s important to recognize certain intangibles that Doughty brings. There’s clearly no shortage of passion in Doughty, even at this stage in his career, with a desire to win outweighing personal accomplishments. Doughty’s honesty about where the team stood at certain points in the season, after certain games, was commendable and seemed to have the pulse of those watching in many ways. In a world that often lacks that, Doughty remains refreshing in that area.

Trending Down – Doughty’s plus/minus was a topic of debate over the last two seasons, and while the Kings were in the hunt, it hovered right around even. The last ten games of the season, however, Doughty was a -12, with just one point. Take that statistic as you will and put it into the context of the Kings playing pretty poorly as a group, overall, across that ten-game sample size. Those ten games came with the Kings all but out of playoff contention, with Doughty’s minutes slightly reduced.

Looking at his offensive production, by his own admission, it’s the end of the rink he focuses on second. But over the last three seasons, Doughty has scored just one goal at 5-on-5. This season, his power-play production was excellent, and his assists at even-strength were towards the higher end of his career. But, as the Kings look to drive more offense from 5-on-5 play, Doughty and the rest of the defensemen will be counted on to contribute in that area moving forward.

It’s tough to find a ton of glaring flaws with Doughty’s season on the ice, so we’ll add in his postseason comments here. Doughty’s competitive fire continues to burn, and this season has shown that he’s still got a lot to give, and wants to see the Kings improved to help maximize the window of his and Anze Kopitar’s productive years. This is, by so many accounts, an important offseason for the Kings, and their star defenseman made it clear that he’d like improvements made to the group entering the fall, going as far as to say he wouldn’t be happy to come back in the fall without those improvements.

2021-22 Status – Doughty is the longest contracted member of the Kings and has perhaps the most cemented role on the 2021-22 roster.

With a contract that runs through 2027, a full no-movement clause and his high level of play from the season that was, you can write number 8 in pen on the right side of the Kings top pairing come training camp in the fall.

By Zach Dooley
9 Comments
Behind the Scenes