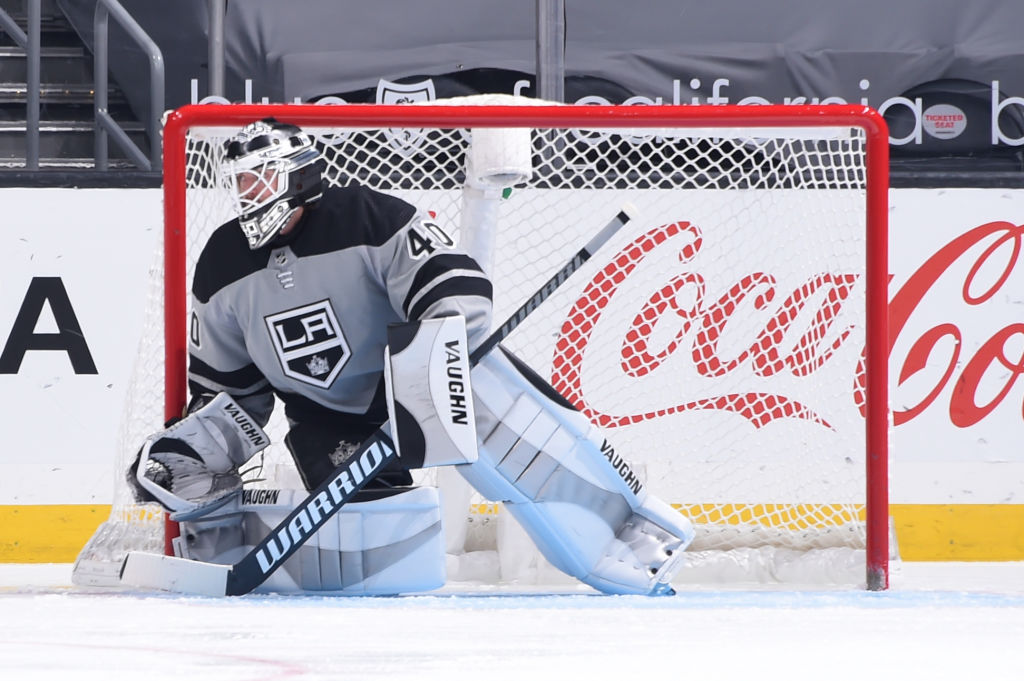 We conclude this week’s player evaluations by capping off the Kings goaltending tandem, first taking a look at the recent top goaltender at the IIHF World Championships.

Today, we look at the newer member in Cal Petersen, who completed his first NHL campaign, as he assumed his share of the starting role, in a transition to taking on the number one job moving forward. On Friday, we will take a look at the veteran half of the Kings goaltending tandem, with Jonathan Quick’s 2021 season.

Through the ups and downs of his first full season at the NHL level, Cal Petersen went from a promising option, to the likely number one goaltender moving forward. Petersen appeared in 35 starts for the Kings, as the organization began the transition to making him the starting netminder, a trend which is slated to continue for the Notre Dame graduate heading into the final year of his contract.

“We feel we have a really good goaltender there for a lot of years to come,” Todd McLellan said of Petersen. “I think, as you improve, as a forward, defenseman, goaltender, coach, whoever it might be, you grow in increments, and you’ve got to push through to the next level on a regular basis. Do what you need to in your increment and then move up to the next one, and then move up to the next one. We’re trying to push Cal through the next increment and make sure that he can elevate and compete as a number one consistently.”

Trending Up – To post a .911 save percentage, above the NHL average, in your first full professional season is a pretty solid introduction. To do it on a team that struggled in the standings, as the Kings did, makes it even more so. Among qualifying netminders this season, Petersen ranked 12th out of 27 in save percentage, which placed him in the upper half of the league.

Few goaltenders faced more expected goals against than the Kings goaltending tandem of Petersen and Quick, with Petersen ranking in the NHL’s Top 5 in expected goals allowed per 60 minutes. Few goaltenders faced more shots than Petersen, either. In fact, just two with at least 1,500 minutes played handled a higher workload than Petersen, who saw 32.2 shots per 60 minutes.

Where Petersen thrived perhaps the most was in denying high-danger opportunities against. To preface that, in sticking with the theme, few goaltenders faced more high-danger chances against this season than Petersen, and his .856 save percentage against those chances at even strength ranked third in the NHL amongst goaltenders with at least 30 appearances. By my calculations, that makes Petersen one of the league’s best in that department.

We’ll get into the end of the season later on, but for the first 2/3 of the campaign, Petersen was up amongst the league’s best in net. From January through March, Petersen ranked fifth with a .925 save percentage. Even as far into the season as late-April, Petersen remained in the league’s Top 10, though he and the Kings in general finished the season on a downturn.

Lastly, while not in a Kings jersey, Petersen represented the United States at the 2021 IIHF World Championships and was named as the tournament’s top goaltender, backstopping Team USA to a bronze medal. While the World Championships is far from an indicator of long-term NHL success, if nothing else, his performance was an encouraging bounceback after the way the season finished for the Kings.

Trending Down – While more of a blip than any cause for long-term concern, Petersen’s closing of the NHL season did not match his opening. As late as the end of April, Petersen ranked inside the NHL’s top 10 in several goaltending categories, but ended the season with just two victories from his final 14 games played. The Iowa native posted a .894 save percentage from April through the end of the season.

It’s not fair to put all of that on Petersen. You could hand pick several games in that stretch where the team gave him very little chance at winning – 4/5 vs. ARI, 4/24 vs. ARI and 5/1 @ ANA quickly come to mind – as well as a trio of games against Colorado at the end of the season. It’s not all on the goaltending, regardless of who is in net, but the stats are the stats regardless of how you shake it out.

2021-22 Status – Petersen concludes the final year of the three-year contract he signed with the Kings in the summer of 2019. The bulk of the first season was spent in the AHL, while this season was spent entirely in the NHL. The expectation is that not only will the third season be spent in the NHL, but it will be done playing a prominent role for the Kings.

At the conclusion of next season, Petersen will be an unrestricted free agent, meaning that he and the Kings will need to come to terms on an extension, likely one with more term and a sizeable raise, with Petersen viewed as the organization’s goaltender moving forward.

General Manager Rob Blake said that Petersen has worked his way into the team’s secondary core, that second leadership group, through his play. He called this season an important one, with the season to come important for the developing goaltender as well.

“He had a good first half of the season, we would like to see a little bit more near the end, but the team also didn’t play very well in front, so there were some games that he may have played well without the win result. I think every game he started was a step more in defining his position on our team.”

With both Petersen and Quick under contract for the season to come, the expectation is that both will be back with the Kings as the goaltending tandem next season. Petersen’s continued growth, now as an established NHL goaltender, will be a key point to watch for the newest edition of the LA Kings.

By Zach Dooley
1,244 Comments
Behind the Scenes