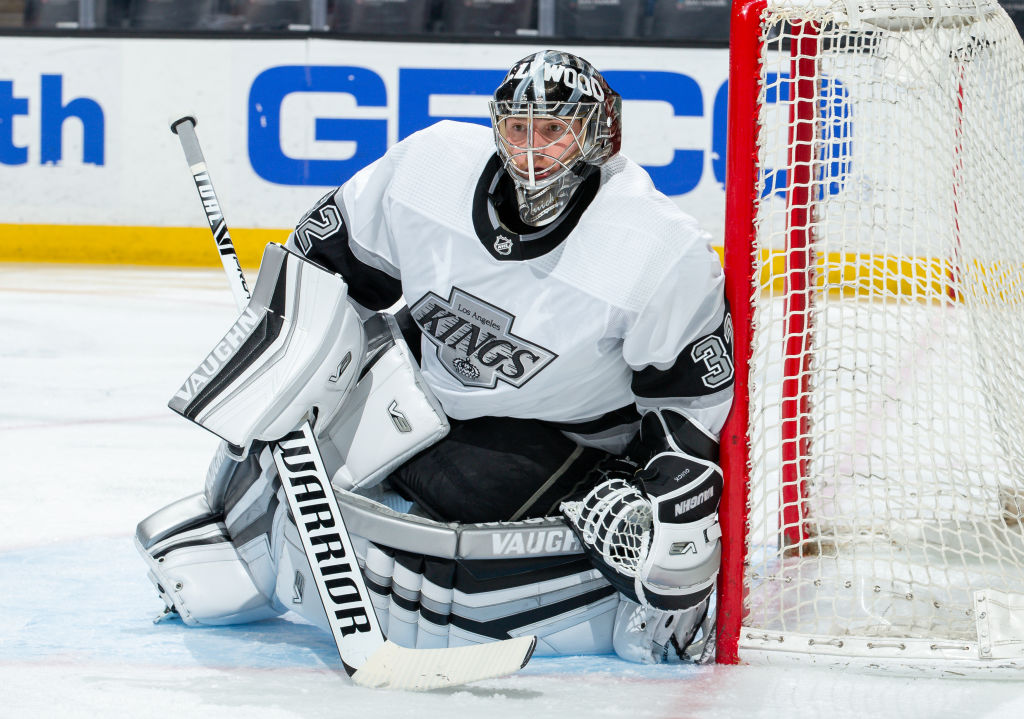 With our group evaluations now completed, we now move onto individual player seasons in review. We’ll take a bit deeper of a look at those under NHL contracts for next season, who spent the 2020-21 season in the NHL, with the Kings.

This week we began with the goaltenders, with Cal Petersen on Wednesday, and today we look at the other half of the goaltending tandem in Jonathan Quick. Quick and Petersen played the majority of season in a timeshare agreement, with both getting their chance at the net.

Jonathan Quick began the season as the team’s opening-night starter, with goaltending partner Cal Petersen on the COVID 19 Protocol list for the first game. He wound up playing 22 games in total throughout the season, for the most part splitting games with Petersen when both goaltenders were healthy and active.

Trending Up – Take away the two games where Quick was pulled against the Vegas, and his save percentage jumps from .898 to .907, which would have been his highest mark since the 2017-18 season and right on the NHL’s leaguewide average. NHL save percentages were at their overall lowest total since 2008-09, and it’s easy to see how close Quick was to that mark. You obviously can’t just remove games, but Quick’s totals were ballooned a bit by two games where the Kings didn’t have it right off the hop against a quality opponent.

The team also had its most successful stretch this season when Quick was playing his best hockey, alongside Petersen. On the six-game winning streak in February, Quick won all three of his starts, with a pair of shutouts, allowing just two goals across the 185 minutes. There were similarities to the seven-game winning streak the Kings ended 2020 on, in terms of strong goaltending leading to team success. It’s a simple recipe, but an effective one.

“He worked real hard in practice, he was ready for tonight,” McLellan said, after Quick’s shutout in St. Louis. “He took advantage of the opportunity and that’s what a true pro does. The group really played hard down the stretch for him, so that he would get that shutout.”

If they say your goaltender is your best penalty killer, then that goes double for Quick. The veteran goaltender ranked second in the NHL in shorthanded save percentage at .910, trailing only his former goaltending partner Jack Campbell amongst goaltenders with at least 20 games played this season. The Connecticut native led the NHL in shorthanded goals against average, as he also ranked third in 4-on-5 save percentage, at .909 and ranked inside the league’s Top 10 in goals saved above average while shorthanded. Quick’s play in net was a huge part of the organization’s Top 10 ranked penalty-killing unit this season.

Trending Down – You could start here with a clean bill of health.

Quick missed time twice during the season, first with an upper-body injury in early-March, followed by an unrelated upper-body injury in May, which took him out of a solid start in Arizona and cost him the remainder of the season. General Manager Rob Blake then announced in his exit interview that Quick was having offseason shoulder surgery, unrelated to the injury in Arizona, but related to “wear and tear” over the course of his career. That’s three separate injuries in a span of four months, for a 35-year-old goaltender who also missed time in 2018-19 and 2016-17, though neither one-season injury was anything major.

Looking strictly at Quick’s on-ice play, he ranked towards the bottom of the league in high-danger save percentage, ranking behind only Vancouver’s Braden Holtby in the category at even strength. That feels like a cherry-picked statistic, but it’s an area in which Cal Petersen ranked inside the NHL’s Top 10. Kings goaltenders, in general, conceded more rebounds than any other tandem, with Quick and Petersen ranking as the top two in rebound attempts against per 60 minutes, amongst netminders with at least 20 games played.

2021-22 Status – Quick is under contract with the Kings for the next two seasons, at a cap hit of $5.8 million, though the actual dollars spent by the organization is fewer, with his contract having been front loaded.

Quick and Petersen are both under contract for the 2021-22 season, meaning that the tandem from this past spring should be expected to continue in the fall, with Quick expected to be back at full go from the aforementioned shoulder surgery.

Both McLellan and Blake have noted that the transition to Petersen taking over the starters role has begun, with that expected to continue to evolve next season. In some ways, this could help benefit Quick, who played extremely well this season after stretches where Petersen played multiple games, posting a .940 save percentage in those situations. It also doesn’t mean that Quick is expected to roll over and be a backup goaltender, but a more managed workload could potentially help to keep Quick healthy as well, depending on exactly how the goaltending split will be managed. Expect a motivated goaltender, not ready to become a number two, in the fall.

By Zach Dooley
379 Comments
Behind the Scenes

By Zach Dooley
1,242 Comments
Behind the Scenes