The LA Kings announced today, via the All The Kings Men Live show, their 2019-20 team awards, as voted on by….a large collection of groups. Defenseman Matt Roy was the biggest winner, as he was honored four times, with Anze Kopitar recognized three times and Austin Wagner, Trevor Lewis, Blake Lizotte and Alex Iafallo honored once apiece.

Starting with the media category –

Talk about Roy-alty! Three of my four votes were reflected in the final tallies here, with Kopitar as the team’s Most Valuable Player, and Roy as both the Outstanding Defenseman and Top Defensive player. Though he was eligible, I didn’t consider Matt Roy as a newcomer, since he played 25 games with the Kings the season prior, so I voted for Blake Lizotte in that category.

Kopitar as the team’s most valuable player was, in my opinion, a slam dunk. From the basic statistical perspective, he led the team in goals (21), assists (41) and points (62), topping the charts in the latter two categories by 15+. He was also one of four plus players amongst Kings regulars, and led the team with seven power-play goals and 21 power-play points. Kopitar displayed positive possession metrics, even if not quite at the level of the previous height’s he’s produced, and was the team’s best center in the faceoff dot, as he posted the best ratio of his NHL career (55.2%).

Roy’s selected as the Kings Most Outstanding Defenseman ends Drew Doughty’s run, which dated back to Willie Mitchell in 2012, a span of seven straight seasons. Roy was a revelation during his first full NHL season, as he swept the remainder of the media voted awards. Roy posted a team-best +16 rating on a team that was -24 at even strength this season, and was a possession metrics darling.

Among defensemen with at least 60 games played, Roy’s 56.0% SAT% was fourth best in the NHL, while his USAT% at 56.9% ranked second best with the same parameters. The Michigan Tech product was one of three defensemen with a +200 differential in shot attempts and a +250 differential in unblocked shot attempts. When you factor in the Roy love from the media, as well as through his numbers, you wonder why he was voted (spoiler alert, see below) by the players as the team’s unsung hero….seems like he’s sung about pretty vocally!

For the player and internal staff voting – 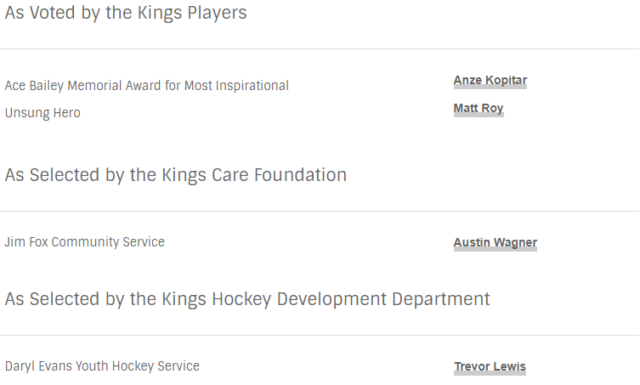 As mentioned above, Kopitar and Roy each received one award from their teammates, with Kopitar given the Ace Bailey Memorial Award for Most Inspirational player, and Roy named as the team’s unsung hero.

For the second consecutive season, Austin Wagner was honored by the Kings Care Foundation for his service to the community, while Trevor Lewis was selected for the Daryl Evans Youth Hockey Service, by the Kings Hockey Development Staff.

Not a vote per say, but Kopitar was honored as the team’s leading scorer, while the Kings Booster Club voted Blake Lizotte as the team’s “Most Popular Player”.

Lastly, Alex Iafallo was named as the team’s McDonalds Player of the Year for the second straight season, and for good reason. It’s nice to see Iafallo get some love. Iafallo was a player the Kings were eager to move down in the lineup at the start of the 2018-19 season, but the now 26-year-old winger has responded by increasing his totals in goals, assists and points during each of his three seasons, with a career high 43 points as a third-year player. Iafallo has found a home on Kopitar’s left, and has proven to be a heck of a find as an undrafted free agent.