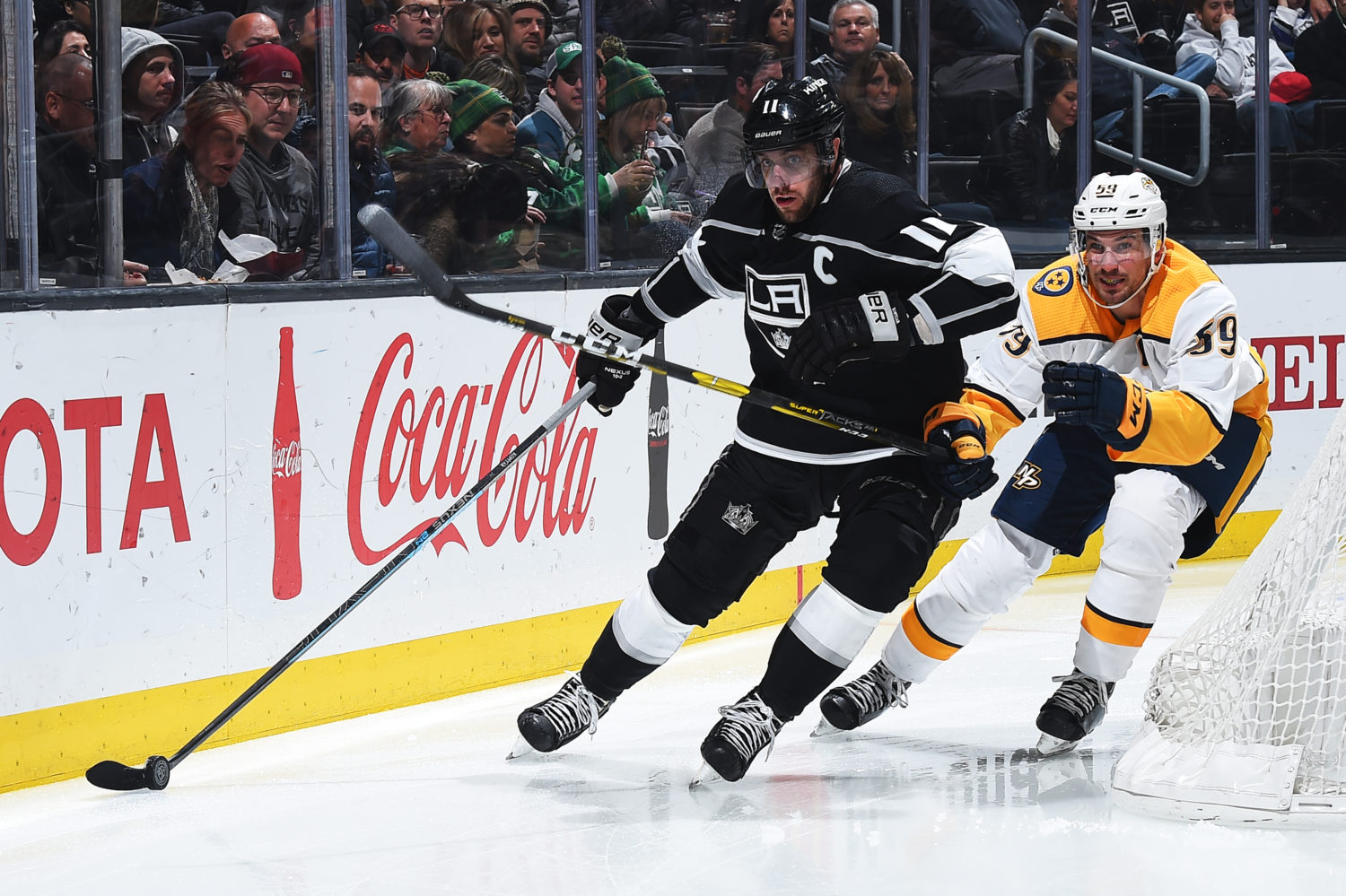 News from the final skate prior to Saturday’s 3:00 p.m. home opener against Nashville is below.

— For all doins a transpirin’ around Staples Center tomorrow, click here. For more on the game operations and a Back to the Future II reference, go here.

— It was a good work day and typical post-recovery day practice with continued structural installation, special teams detail and a conditioning skate that incorporated competition and resembled some sort of stock car race, according to one observer. Not all made it through without falling.

— The vitals: Todd McLellan has settled on Saturday’s goaltender but would prefer to avoid a situation in which the goalies find out about it through the #LAKingsGoalieTweetOff. “I want to talk to that goalie. I don’t want him to find out or anybody to find out without me sharing it with him,” he said. There will be changes to the lineup. There weren’t any real line rushes, per se, but rather some drills that were very line-rushy, and the only grouping that appeared to remain intact was Anze Kopitar’s line.

“We began talking together here about a line’s that played pretty well, and you hate to move pieces out of those spots,” McLellan said. “There’s a couple other lines that have played well. We’ve had one that’s really struggled, and to distribute those players around, we’ve got to shuffle some guys, and hopefully we find something that’s successful.”

He also shared that “Lizotte and Toffoli, and whoever’s played there has played pretty well, too,” though there’s a need to get “trusting games” from different players in the lineup right now. There were a number of rotations, but expect there to be changes up front and on the back end. Adrian Kempe skated at wing and Jeff Carter at center for several rotations; changes are also expected defensively.

“I think when we left [on the road trip] we said we would come back and have something to base an opinion on. It’s a tough opinion to establish collectively because we’ve played some really good periods. We were Jekyll and Hyde, if you will. Outstanding 20 minutes and awful 15 minutes in Vancouver. Just all over the map. That might be the stage our team is in. We’ll be working hard to find some consistency, and then individually, I think there are some guys that clearly sent us messages that they’re willing to do things right and well. It doesn’t mean they won’t err. And then there are some others, they’ve got to pick it up quickly.”

Kurtis MacDermid didn’t skate and is day-to-day, per Lisa Dillman of The Athletic. He got dinged up in the feisty Calgary game but is on the verge of skating and getting involved again. “Based on the 3:00 game, we won’t have a pregame skate, but he would be skating tomorrow. He felt pretty good today but won’t be available for [Saturday’s] game,” McLellan said.

— Their vitals: I haven’t caught word of any official rushes from Nashville’s practice, which was held prior to their flight west. In their game against Washington on Thursday – a 6-5 win in which they scored four third period goals to come back from a 4-2 second intermission deficit – they lined up with Jarnkrok-Johansen-Arvidsson, Forsberg-Duchene-Granlund, Sissons-Bonino-Watson and Carr-Turris-Smith up front with defensive pairings of Josi-Ellis, Ekholm-Fabbro and Irwin-Weber. They’re yet to play on the road and have started 3-1-0 with 19 goals, tied for the best mark in the West.

— Jonathan Quick was a topic of discussion. “He’s been in the net for a lot of goals against. I’m not going to candy coat that,” said McLellan, who also took into account several own goals that have affected the goalie’s statistics.

This is a young defense. It’s a young defense that Jack Campbell has played well behind in the past, but it’s still inexperienced and short a man from last year. When McLellan was putting together lineups and different looks in May, he had Forbort in an important role, “and he’s a pretty good shutdown guy.” He had Paul LaDue penciled in, “and he’s just getting his feet wet now because of injury.” (There’s no update on Forbort, who remains a ways away from skating. “Just try to rehab and get better,” McLellan said.)

But the thought that there’s less predictability with such a young lineup elicited an interesting response. “That’s a big factor,” McLellan said.

“When you can be a little predictable as far as the pair that’s in front of you, you look up on a faceoff, and OK, out comes Robyn Regehr and Willie Mitchell, you get a pretty good idea of what’s going to happen. Now, that doesn’t let anybody off the hook because old dogs need to learn new tricks, but there is a familiarity of reading pairs and what their tendencies might be. Now you look up and you see some younger kids that you haven’t played many games with, the predictability factor goes down a little bit. But that’s all part of the development.”

— The Kings believe better organizational infrastructure should help them avoid the nadirs experienced last season. “Dynamics are much better set up for us to nip it in the bud, so to speak,” Dustin Brown said.

On the surface, Wednesday’s loss felt like a redux of 2018-19 woes as the Canucks struck four times in the third period to win in a rout. “I mean, it’s a learning process for a lot of guys with inexperience. Games like that are going to happen. I think the most important thing is how we respond today,” Brown said. “We had a good practice today. That’s I think the best way to go about it. Todd said it today … you can’t let that 10-minute lapse turn into longer. Just stopping it before it takes too much of your year away.”

McLellan saw several “fairly consistent” areas of concern “long chances.” The Kings weren’t getting hammered in offensive zone time or “cycled to death,” he said. They did yield goals from close range and the opposition’s play around the net.

He identified two reasons why the team was surrendering the long chances. One was that they’re still building detail into their forecheck and working some of the kinks out of their new systems. The other was that such chances were “coming off our tape” via turnovers.

“If they gave a fourth assist, we’d have the leading scorers in the league right now,” McLellan said.

“When you go and you look at when guys are working into position, with or without the puck, we’re a pretty good team when we’re playing direct hockey. I don’t know that we’re going to be a very good east-west, cute drop-and-drag team. I think that this group is built to be more north-south and play direct. We get away from it. We tend to slow ourselves down and not work into position, and then it becomes difficult and it can snowball. We saw that in Vancouver.”

“When we’ve been able to shoot pucks and get them back, we look like the better team. When we play off turnovers, the other team looks better, and it’s as simple as that.”

First career multi-goal game for @ColeHults and it just so happens to be the eighth hat-trick in program history and the first by a defenseman!!

Hults is also the first #B1GHockey defenseman to register a hatty in over three years!! @LAKings #WeAre #HockeyValley pic.twitter.com/me8MLnCpmE