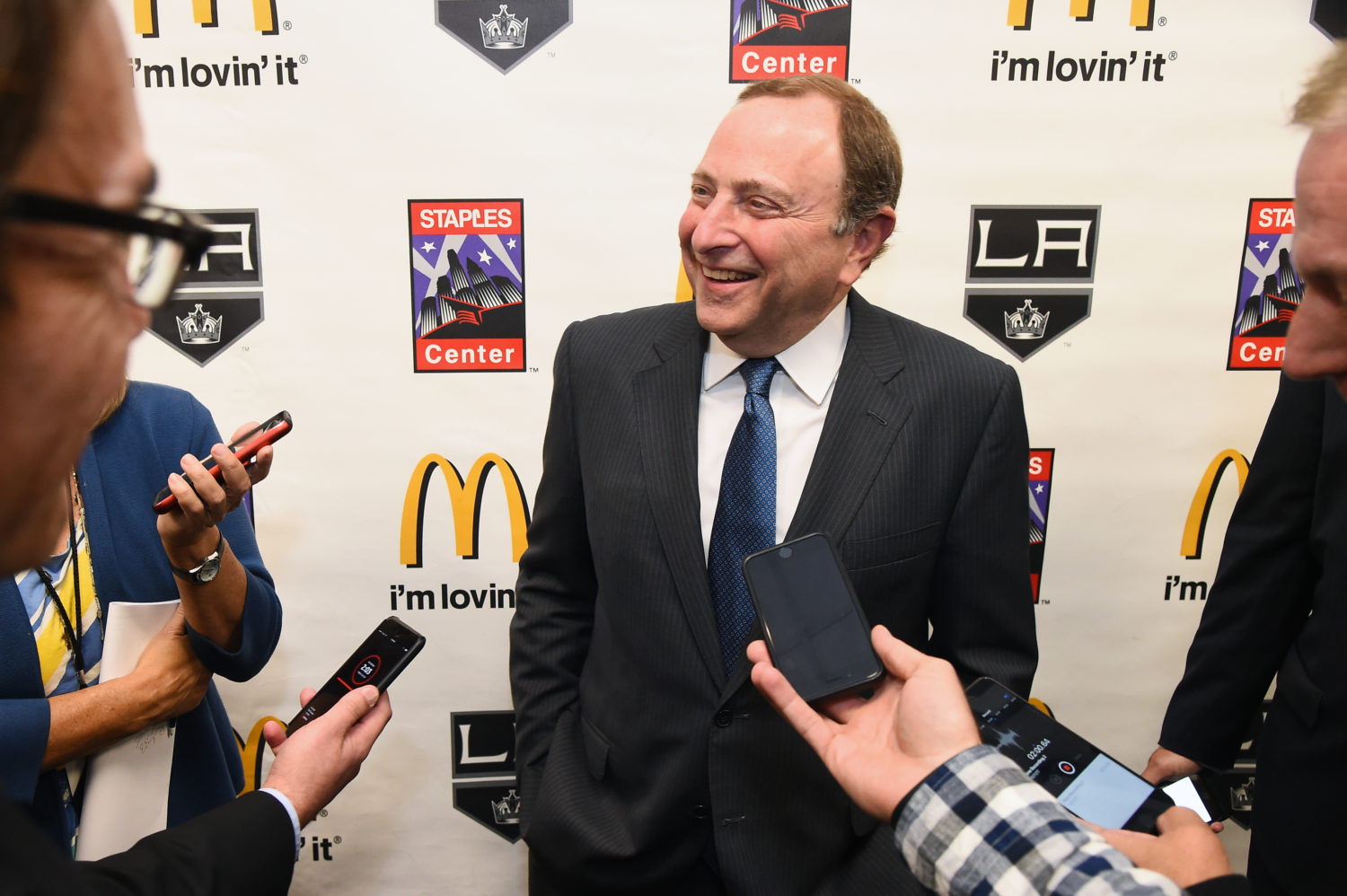 Gary Bettman spoke with a contingent of season-ticket members at the Regal L.A. Live Cinemas Wednesday night, and, during warm-ups of the Kings-Flames game, met with the media for an informal question and answer session while also checking in with Rob Blake, “who spent some time with us at the league office for a couple years” in an effort to “see how he’s progressing, which is apparently very nicely.” Bettman was in Los Angeles after having attended the Vegas Golden Knights’ home opener the night prior.

Opening statement:
Speaking of Las Vegas last night, it was a very emotional, historic night, but I would be remiss if I didn’t remember Chrissy Duarte, a member of the Kings organization. The tragedy touched so many people in so many ways. It was just horrific, and I think [Tuesday] night struck so many right tones in terms of acknowledging the terrible tragedy and using sport and a team as a vehicle to come together as a community, and to heal. Also, to acknowledge today Bob Miller, honored by Los Angeles, which is certainly well deserved. I understand he’s getting his own statue. Also well deserved. Terrific man, and it’s nice to see those types of life events. Other than that, I’m just here to catch a game. Questions?

On whether he’s surprised there aren’t as many national anthem protests in the NHL as in the NFL:
No, I think that the overwhelming NHL players, while they’re active in the community and on social causes, I think when they come to the rink as a team, they come together and they focus, and I think that’s what fans want, and our guys have been terrific.

On any intention for Los Angeles to remain in a league rotation for major NHL events:
Well, we were just here for the All-Star Game, and it was spectacular. Putting aside all the events that surrounded this building at L.A. Live with the Centennial Tour and the celebration, the thing most vivid in my mind was watching the hundred greatest with the All-Stars. That was spectacular. This building, the Kings organization, AEG know how to do big events, and we know that, but I think they’re letting us catch our breath, and they acknowledge that there are other teams that want to host these events. But on an ongoing basis, we’ll be back, and it’s a testament to this greater organization how well they do events. And AEG was also involved [Tuesday] night. [Reporter: And one minor follow-up, too, any plans for an outdoor game, the Kings to be involved in the next several years?] Not in the next year or so. Somebody asked me about the Kings in the Winter Classic, except we have to play a game in Los Angeles at night, and the game at Dodger Stadium was just terrific. So, yes, there’ll be more events on the horizon, but we do have to spread them around because you went through a list of events that many clubs haven’t had one of those, let alone all of them.

On an assessment of the NHL China Games:
The trip was a huge success for the first two games in China by the NHL. It was what we expected. It was comparable to the initial forays by other sports, and when we do international events, we do them jointly in terms of administering them and making decisions with the Players’ Association, and we have to make sure that everybody’s on side before we can move forward. But our goal is to do more because it was such a great experience, and the Kings traveled so well, as did the Canucks.

On the upcoming NHL Global Series in Stockholm:
Yes, they’re coming up in November. I think we’ve been sold out or virtually sold out for weeks, if not months. We’re excited. A lot of players in the NHL … are from Sweden, and we’re excited bringing our players and two teams there that have stars who will be very well recognized in Sweden. [Reporter: Are you going?] Of course.

On the league’s new slashing standards, and the feedback he’s received from clubs:
After a game, you may be the recipients of some comments that show a little frustration, but the fact is the slashing standard’s important because broken wrists, hands and fingers – not so good, right? The officials are going to stick to it, and our players are great, as are our coaches. They will adjust, and if we get that kind of slashing out of the game, all slashing out of the game that should be penalized, we’ll be in a better place as a game. So far, so good, even though there are a lot of penalties. Unless you call it, we’re not going to be able to change it.

On whether the next China games will be regular season or exhibition games:
I think we haven’t decided that yet. My guess – and it’s purely a guess – next time will probably still be preseason, but we haven’t finalized anything yet. I’m not making an announcement that we’re going, and I’m not making an announcement that it’s either pre-season or regular. I’m speculating as to what a possible outcome will be.

On visiting Bill Foley during Tuesday’s Vegas home opener:
Yes. I was with him after the second period, and then I was with him after the game. He’s a happy person. … The fact that they’ve started 3-0 obviously feels good to him. He understands that it’s an 82-game schedule, but Bill pursued a team in Las Vegas for years. He believed that Las Vegas would support an NHL team, he spent a long time going through the due diligence to convince us, which he did. He ran the ticket drive, he built an organization from scratch, and then, the terrible tragedy. But what’s happened is he – and I think the people of Las Vegas – saw what a sports team … can represent to a community, and the fact that his organization, particularly the players, were out in the community, at hospitals with first responders. I think there was an acceleration of the bonding between the Golden Knights and the city of Las Vegas that that tragedy brought forward. Not that that was a good thing – nobody ever wants to go through a tragedy like that. But there was an emotional connection, and teams have that with their communities. Sometimes it takes years to build.