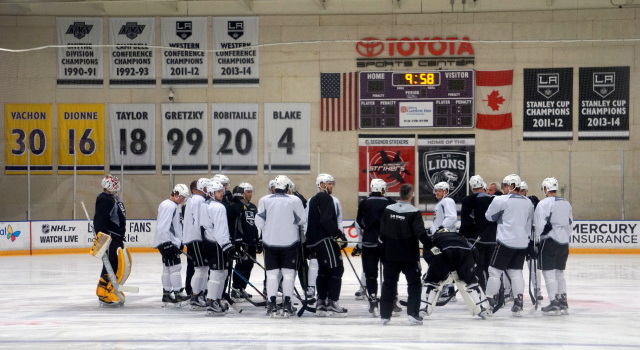 Good day to you from El Segundo, Insiders. Hopefully those of you who made it down (or up) here this morning weren’t caught in the same 405 mess I was. Because of the standstill near the 10 and 405 interchanges, I didn’t catch the beginning of line rushes. But, based on what we saw over the remaining 20-30 minutes of the skate, the Kings appear to be aligning as such:

-As we await a hypothetical suspension, Tom Gilbert skated as an extra and was joined by Jordan Nolan, who isn’t expected to skate tonight. Andy Andreoff did not take the ice with the group.

-Welcome back, Teddy Purcell and Kevin Gravel. “It feels good,” said Purcell, who noted that being “banged up,” per Darryl Sutter, was the result of a particular incident during one of his two early-season games. “It’s been a while since I’ve played. My body feels good finally, so I’m excited to get back in.”

-Gravel, on whether he was disappointed to not make the team out of camp: “I think so, and I think that’s OK as long as you use that in the right direction. Obviously you set a goal and your goal is to make this team out of camp, and that didn’t happen but you just go down there and continue to get better. Obviously I’m not a finished product yet and there’s a lot of things I can learn, a lot of things I can still work on, and you just try not to think about it and wherever you’re at you just kind of show up and play your game. You let everything else just take care of it self and as long as you’re taking care of the things that you can take care of everything will sort itself out.” Purcell, Gravel stories coming soon.

-Peter Budaj and Jack Campbell were the goalies on the ice. Budaj left the ice first and is expected to start against Pittsburgh. After the skate, Anders Lindback took the ice and got in some work with Bill Ranford. Again, it’s very possible that Lindback, who is currently on an AHL PTO and can not play NHL games with that contract, will get into games with Ontario in Tucson this weekend.

-Darryl Sutter “was shocked and surprised” by the decision to hold a hearing for Tom Gilbert’s hit on Nick Ritchie from Tuesday. Full quotes to come early this afternoon.

-Marc Andre-Fleury is expected to start for Pittsburgh tonight at Staples Center (7:30 p.m. / FOX Sports West / FOX Sports GO / KABC 790 / I Heart Radio). The Penguins aren’t holding a morning skate at Staples Center this morning, so no line rushes are available at this point. On the visitors’ 5-1 win at Anaheim last night, Pittsburgh Head Coach Mike Sullivan told Jason Mackey of the Pittsburgh Post-Gazette, “I really liked how we played. I thought we were skating. We were moving the puck. I thought we executed much better coming out of our end zone. … Overall, it’s probably one of our more complete games this year.”