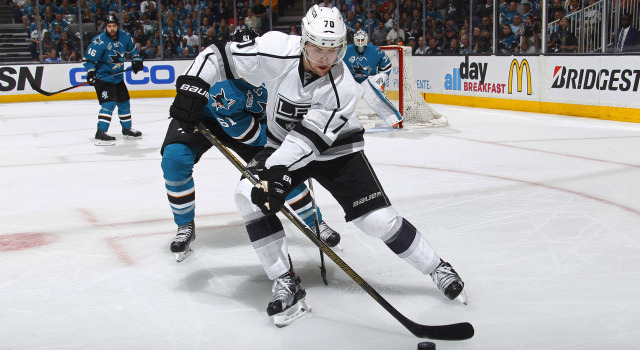 As reported earlier by LA Kings Insider, Tanner Pearson faces a hearing with the Department of Player Safety for his shoulder-to-head hit on Edmonton’s Brandon Davidson, which resulted in a checking to the head major penalty and game misconduct in Sunday’s 3-2 loss to the Oilers in Vernon, B.C. The hearing will be held over the phone, according to hockey ops; the date and time of it has not yet been set. Los Angeles concludes the preseason with games in Las Vegas against Dallas on Friday and Colorado on Saturday.

Davidson injury (2 replays in this GIF). Pearson ejected from the game for the hit. pic.twitter.com/r8qpPUgkpN

That’s a high hit that the league is looking to rid itself of, and it’s a beat late as Pearson whiffs on making contact with the body, springing upwards towards Davidson’s head. He doesn’t have any priors with the Department of Player Safety, so there shouldn’t be any concern over a lengthier suspension. There’s little sense in looking for past precedent, but it is somewhat bizarre that Scottie Upshall wasn’t dinged for this leaping elbow to Tyler Toffoli’s head during an early season game in St. Louis last year.

The Kings will return to the ice for practice at 10:0 a.m. on Tuesday, October 4.