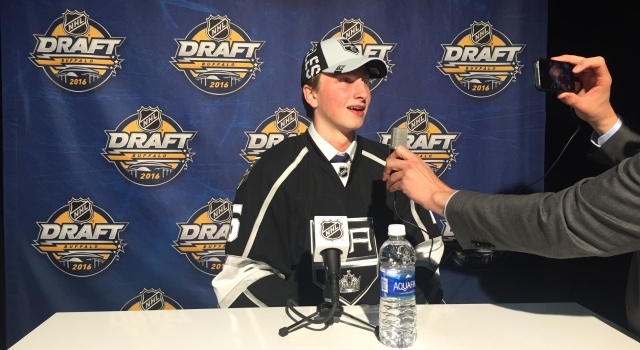 On being drafted by Los Angeles:
It’s definitely an amazing feeling. I was so happy when they said my name, because it’s an incredible organization. They have two Stanley Cups in three, four years. It’s an honor.

On whether he sensed that Los Angeles was interested in drafting him:
I had a meeting with them at the combine, and it felt really god, so I had a little bit of a feeling that they were maybe going to pick me, but you can never be sure.

On whether he has ever been to Southern California:
No, never. [Reporter: It’s nice weather, an exciting place. Interested to get out there and meet other prospects and try to make the team?] I’m looking forward to the development camp very much.

On how he’d describe himself as a defenseman:
I’m a two-way defenseman but more at the defensive zone, and I think my strength is I read the game kind of good and have a good first past.

On whether he’s familiar with Adrian Kempe:
Yeah, I’ve seen him play, and he’s a really good player.