Quick describes save on Marchand (+ video) 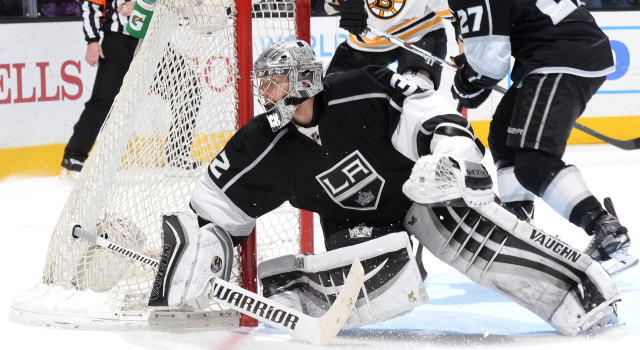 Brad Marchand is having a career season with the Boston Bruins with 34 goals through 68 games. He’s already eclipsed his career-high by six goals.

During the first period of Los Angeles’ 2-1 win over Boston at Staples Center Saturday night, he came this close to burying his 35th:

Yeah, that’s a candidate for Jonathan Quick’s save of the year. After the Patrice Bergeron’s shot was held up in traffic, the puck popped directly to Marchand, who controlled it and wristed a hard, low shot that Quick turned aside with his right skate.

“I kind of forget the set up, to be quite honest,” Quick said on Sunday. “He had a lot of net. I don’t know if he was surprised about the amount of net, I’m not sure if he got off as clean of a shot as he wanted to. I just stuck a leg out and luckily it hit my foot.”

That type of save is when instincts come in and the puck is kept out of the net by any means necessary. As Nick Nickson has often referred to these types of moments, it was a “Quick save, and a beauty.”

“It’s like more desperation,” he said. “I forget what happened – I don’t know if it was a pass or if it hit something and ended up kicking out to him, but I know I was late getting out there. I was just trying to get some net coverage, and luckily it hit me.”

Last summer, Quick wrote a two–part article for The Players Tribune that discussed the challenges of facing the most elite snipers in the National Hockey League. It was, in fact, called Elite Snipers 101. With some of the insight he shared on facing top shooters such as Patrick Kane and Alex Ovechkin, he also described what he’s aware of when someone like Marchand, an elusive forward with a quick release, has the puck in the offensive zone.

“Yeah, without a doubt, [he’s one of the tougher players to read].” He’s a guy you have to plan for a little bit before the game. He’s very creative, especially around the net. He has really good hands, and he has a really difficult shot to read. That doesn’t surprise me that he has 34 goals this year.”

For added measure, he stopped Marchand again with another beauty in the second period: