Brown on his off-season regimen, hiring a nutritionist 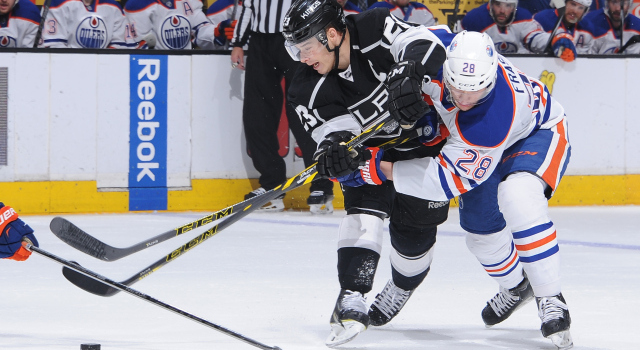 If you’ve been hanging around the social sections of LA Kings Insider or Let’s Go Kings, you might have noticed several Dustin Brown workout clips that depict the Kings captain looking, well, particularly chiseled.

The 2015 off-season provided the Kings the unwelcome “luxury” of four months of rehabilitation and training following three straight seasons in which they played into June.

“I think, first … a lot of players in here haven’t had an opportunity to really have an offseason, so there’s two ways to look at how last year ended,” Brown said. “The one side of it is that we don’t want to be in that situation again, and the other side is that it’s a huge opportunity for us to make gains off the ice. Just from a time standpoint, you have time to put the work in.”

Compounding the challenges of a 2014 off-season that favored rest and recovery over a more traditional training approach, the Kings experienced a gap in their strength and conditioning coaching when their previous strength coach, Ryan Van Asten, joined the Calgary Flames and was replaced by current Strength and Conditioning Coach Matt Price after a search process.

While the added recovery time this summer allowed many players the ability to properly fine tune themselves for the upcoming 82 games, for Brown, an added focus on what he was putting into his body was just as important.

“I hired a nutritionist right after the season, so that’s probably the biggest thing [towards my conditioning],” he said. “I mean we were told what to eat and that sort of thing on a basic level, but when you hire somebody and they know what they’re doing, that’s probably the biggest difference. I think most guys in here work really hard in the offseason, whether they’re doing their own program, or Matt Price’s program, or whatever program they’re on, they’re working hard at it. I just looked at what I had been doing the last little while – the strength stuff is all very similar – but the one thing I … was uneducated about the nutrition part, so I hired somebody who knows what they’re doing.”

Given that the informal summer skates at Toyota Sports Center have drawn a regular crowd that includes a heavy contingent of Kings players and prospects, it does appear as though Brown wasn’t the only player to take advantage of a cruelly long summer that no one in the organization hopes to replicate.

“I mean, I don’t want to speak for everyone, but there were a lot of guys working out in LA when I was back home, a lot of guys go home and I’m sure they’re working hard,” Brown said. “I just know what I’ve done, and again, part of it is the skates we’ve had and how many guys have been here, and part of that is because we’ve had a long summer. After the last three years, when you’ve played in June, you hardly don’t even want to look at your equipment until you have to, and it’s a little different when you have this much time. It’s given us an opportunity to get better individually, and if everyone’s done their work in the offseason, then collectively we’ll be a lot better this year.”

Dustin Brown, on having appeared to be in good shape in previous training camps:
A lot of it’s the time, if everyone’s going to bulk up or whatever, it’s because they actually have the time, as opposed to the last three seasons I’ve had the time to just get my body where I can skate for 82 games.

Brown, on the ratio of weightlifting to cardiovascular exercises:
It goes in phases. Just like if you have Price’s repertoire, other trainers have a formula for when you work on certain things. My heaviest month, I think, was July, where I was doing two workouts a day and sometimes skating. I don’t sit here and pretend to know what I’m doing – that’s why I have a strength trainer. So, I kind of looked at that and said ‘I don’t know what I’m doing from a nutritional standpoint,’ so I hired a nutritionist. I think, quite honestly, that’s the biggest difference for me – the nutritionist – because now I feel better in my workouts because I’m eating better foods, and understanding it and getting educated on it. In years past, I would get done with one workout and be tired, and I’d have to do a second one, but I wouldn’t really have the energy to do it, and now my energy levels are higher. It’s been a pretty eye opening summer from that standpoint. I’ve been hearing it for 10 years now that you’ve got to eat well, and you don’t really understand what that is until you do it, and then you see how you feel and it starts to click for you. Like I said, this summer was just a big opportunity for everyone and I tried to take as much advantage of it as I could.