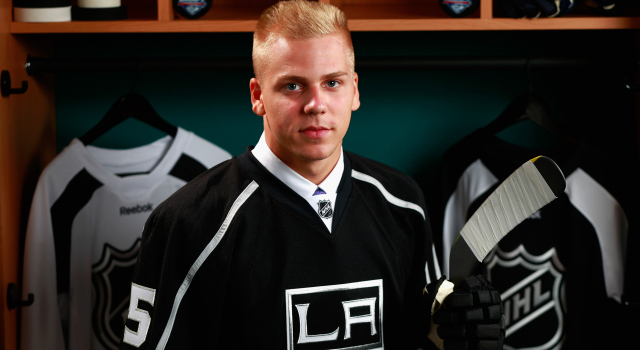 Erik Cernak has signed a three-year entry level contract with the Kings, opening his pathway to play in North America in the coming year.

Los Angeles’ top pick in the 2015 NHL Draft, Cernak, 18, was selected in the second round, 43rd overall. The well grown 6-foot-3, 203-pound defenseman represented Slovakia at the World Junior Championships in his 16 and 17-year-old seasons, both of which ended with HC Kosice championships at the club level.

Part of Cernak’s appeal – in addition to a fluid combination of mobility and size – is his freedom to play at a variety of different levels.

“Very rarely do you have complete control over a European’s development path, and we have complete flexibility in terms of his development path,” Director of Amateur Scouting Mark Yannetti said at the NHL Draft. “So, there are four or five different options we can deploy with him next year, all the way from staying in Europe, to going to the American league or going to Juniors – if we sign him. So, in terms of what our development staff can do, and the fact that we can get our hands on him immediately, where a lot of times – look at Kempe’s adjustment in just one month. Give our guys the whole summer, then a whole season. If that’s the path we choose, it’s rarely open to us, and the attributes he brings at that pick, with that flexibility, made it for us a no-brainer.”

By signing, Cernak’s most likely destinations this season are Erie, which drafted his major junior rights, and Ontario. Because he was drafted out of Europe, and not a North American major junior league, he is eligible to play in the AHL as early as this season. If the initial thought of an 18-year-old making his North American debut in the AHL seems to be a stretch, the Reign’s blue line will see some turnover and will be a bit younger than the Monarchs’ blue line was in 2014-15. Derek Forbort may graduate to the NHL, Andrew Bodnarchuk signed with Columbus, and Colin Miller was traded to Boston. That leaves approximately seven or eight spots for Kevin Gravel, Vincent LoVerde (an RFA who was qualififed), Nick Ebert, Alex Roach, Alex Lintuniemi, Zac Leslie and Kurtis McDermid. Jamie McBain will also likely see time in Ontario, as could Jeff Schultz; Lintuniemi and Cernak are the only players eligible amongst the group to play major junior hockey in 2015-16. Returning to the Slovak Extraliga is also a possibility.

With that considered, it wouldn’t be a surprise to see Cernak report to Erie this season in addition to offering a defense of Slovakia’s bronze medal at his third World Junior Championships. | INTRODUCING ERIK CERNAK