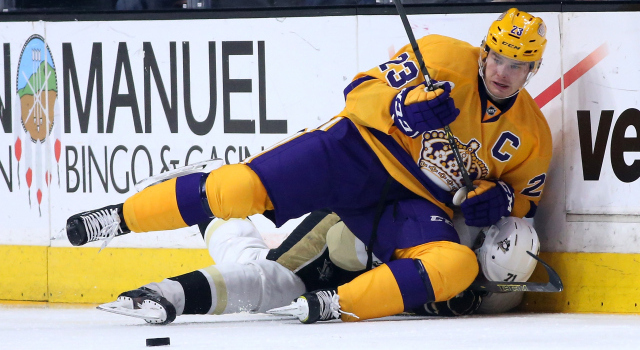 The good: He’s not necessarily a “rah-rah”-type, but Dustin Brown is a conduit of the team’s emotional distribution and one of the league’s familiar north-south hustle forwards. He’s excellent at screening goalies, forechecks well and adds a physical element only a select few around the league can match. He may not be credited with quite as many “hits” as he was earlier in his career, but Brown hits often and legally, and one of his most valuable assets is his ability to play a physical game without taking penalties that cost his team. Brown led the Kings with a +14 even strength penalty differential, and his 23 penalties drawn at even strength was tied for the fourth best mark in the league. Remarkably durable for his style of hockey (and amount of hockey he’s played over the last four years), Brown appeared in all 82 games and has missed a grand total of 15 regular season games since returning from Manchester, where he played during the 2004-05 NHL lockout. He’s among the most adept Kings at carrying the puck cleanly into the offensive zone, as the post-game zone entry posts indicate, and once in the attacking end, he’s very good at opening up space for his teammates. Brown’s shorthanded time on ice per game leapt 50 seconds to 1:19 in 2014-15. In November, he scored on his 30th birthday and the 200th goal of his career.

The bad: Whereas a terrific playoff run a season ago glossed over what he deemed a “disappointing” regular season, the Kings did not qualify for the playoffs in 2014-15, eliminating the possibility to redeem what may go down as the most difficult regular season of his professional career. A typically solid possession-driving forward adept at generating cycles and maintaining deep offensive zone time in addition to his tried-and-true physical play, even Brown’s analytics represented a struggle. His 54.5% Corsi-for at even strength generated a -1.2 Corsi-rel, only the second time in his career his possession rates were below the team’s mean (though his possession rates rose sharply in the second half of the season). Of the 12 players Brown saw the most ice time with, it was with only Justin Williams (2.56) that the Kings averaged more than 2.0 goals per 60 minutes. When skating alongside Anze Kopitar, the Kings allowed nearly a full goal more per 60 minutes (2.69) than they scored (1.73). As for his primary statistics, his minus-17 rating was his worst mark since the 2006-07 season, and he endured goalless streaks of 19 and 17 games. Part of this struggle was likely due to bad luck; Brown’s PDO was a career-low 97.5. “I’ve been saying this, there are two types of slumps,” he said in April. “Slumps where you’re not getting a sniff or not getting any looks. I think this last one…it’s kind of ironic that’s the one that goes in the net, it’s a sharp-angle shot. I’ve had point-blank chances that I haven’t been able to bury. It’s frustrating to go that long without a goal, but it’s also probably more frustrating to go half that time and not have any chances.” The poor luck is most clearly articulated in his numbers alongside Kopitar; though the Kings maintained a 65.4% Corsi-for in such situations, they accounted for only 39.1% of total goals when they were on the ice together.

Going forward: After experiencing a difficult regular season followed by an outstanding postseason run in 2013-14, it was written in his off-season evaluation last July that the 2014-15 season would be “important” and would “shine some light on the trajectory of Los Angeles’ longest tenured homegrown player.” The results were not good, and given that Brown will turn 31 in November and has seen his shooting percentage fall for two consecutive years to a 5.8% rate that represented the second-lowest rate of his career, that Brown carries a $5.875M cap hit through 2022 makes his contract status unsettling. Let this also be clear: Brown’s value goes so far beyond the analytic and quantifiable. This is a player whose seething determination transfers to every player in the room, and even if he’s not scoring, his focus and preparation does allow for other players – particularly younger players – to find comfort and regularity in their own games. With Brown having built up an on and off-ice chemistry with Nick Shore, it will be interesting if the two see time alongside each other in the coming season, barring player movement. There’s also the possibility that more time will be available alongside Kopitar, given that Justin Williams is due to become an unrestricted free agent on July 1. Regardless of who he plays with, the upcoming season will be a pivotal campaign in the accomplished captain’s career. “Brownie’s had success by playing a very certain way, and that’s how he has to play,” Darryl Sutter said in November. “When he gets away from … playing a straight line game, then he struggles. When he’s on that straight line game and being a forecheck guy and a really good penalty killer for us, then he’s really effective.”