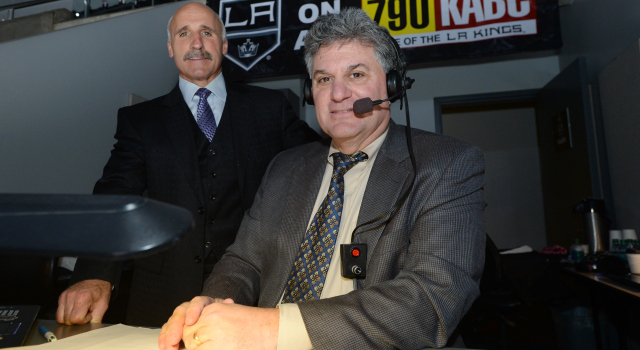 Nick Nickson learned Wednesday that he’d be the 2015 recipient of the Foster Hewitt Memorial Award, presented every year to “members of the radio and television industry who made outstanding contributions to their profession and the game during their career in hockey broadcasting.” Describing the call he received from NHL Broadcasters Association president and 2004 Foster Hewitt recipient Chuck Kaiton as “totally unexpected,” Nickson spoke on Friday about the tremendous honor.

“I don’t know if it’s going to sink in anytime soon,” Nickson said on Thursday. “I just talked to Pat Foley – he called like 10 minutes ago, literally – who won it last year in Chicago. He was telling me it’s been a year since he won it and he still kind of walks around and goes ‘Did this really happen?’ I guess it’s nice to know that your work is appreciated and the work that you do put in gets rewarded in some way.”

It has been deeply appreciated by Kings fans since Nickson joined the club’s broadcast team as a color commentator alongside Bob Miller in 1981 and became the radio play by play broadcaster in 1990.

Having built a rapport with former Kings coach Parker MacDonald while the two worked for the New Haven Nighthawks, MacDonald recommended Nickson to Miller – the 2000 Foster Hewitt Memorial Award winner – in 1981 after former color analyst Pete Weber had left to take a broadcasting position with the Seattle Supersonics. They spent the next nine seasons working together on Kings television and radio simulcasts.

“I don’t think anybody, including players, starts their career with their goal being the Hall of Fame,” Miller said. “…I think, at least in my case – and I think in a lot of others’ – that’s the farthest thing from your mind because you don’t even know if that’s attainable. When you’re informed about it and it happens, it’s a great feeling because it’s a great accomplishment, so I’m very, very happy for Nick.”

Miller is a member of the NHL Broadcasters Association that recently held a conference call to discuss and vote on the Foster Hewitt Memorial Award.

“Just in case there’s any wonder about it, he did get my vote,” Miller joked.

The respect Nickson draws reaches across all mediums.

“When you listen to Nick, you can get such a clear vision in your head of what’s going on in the game without him being overbearing,” said Los Angeles Times sports columnist Helene Elliott, who was honored by the Hockey Hall of Fame with the 2005 Elmer Ferguson Memorial Award.

“He just paints a picture that’s so vivid that you can see the guys going up and down the wing, you can see the goalie make the save as he describes it, you can just see the alignments, you can get a sense of the atmosphere. He’s just so good at knowing when to drop in the score and when not to. He works so well with Daryl Evans. He doesn’t give him set ups that require a ‘yes’ or ‘no’ answer. They’re involved. They engage. They discuss, and it really is a pleasure to listen to Nick and just see in your head what the game is like when you can’t actually see it with your eyes.”

The construction of a descriptive play-by-play account is rooted in accountability and an honest portrayal of a live event.

“He’s not a homer. He’s not a cheerleader,” Elliott said. “He’s fair and he’s accurate and he’s honest, and he just paints such a vivid picture that you really feel as if you almost watched the game.”

Nick Nickson, on influences and principles that helped shape his career:
I was fortunate, as you look back on it, I started broadcasting hockey games on a professional level within a year after I graduated from college. I graduated from Ithaca in 1975 and then in the following February I was hired in Rochester to do the Rochester Americans. Between the time that I had graduated college and did get that job, I was more focused on certainly being in radio in some capacity. But at that time, being a disc jockey, kind of following in my father’s footsteps. And I was a disc jockey. I worked weekends at a station back home in my senior year of college and then up until I got the Rochester job. When the job became available, my dad called me and said that Lanny Frattare, who left the job to become a Pittsburgh Pirates announcer – he was also from Rochester – was leaving the Amerks job. ‘Are you interested? Send him a tape.’ At that point of my very young career, I really had no inclination that I was going to get into sports as a broadcaster because coming out of college, I was looking at just being a disc jockey and working for a radio station seeing how that worked there for a few years. When I found out the Rochester job was available, I didn’t even know I had a tape of a game to send them. So I went through my box of college notes and I found a reel-to-reel tape of an Ithaca College hockey game I did, and I listened to it and said to myself, ‘There’s no way I can send this in.’ It’s not that good. I mean, come on. So I went to the production room at the radio station at night when no one was there, and back then you edited tape with scissors, a razor blade and Scotch tape, and I tried to get rid of all the bad stuff and I sent them about five minutes of play-by-play and they hired me. So I was off and running. Who knew then what it would lead to? But then I started doing my career, I guess what I could draw on as far as being a hockey broadcaster would be the guys I listened to as a kid on my radio at night. Bob Wilson in Boston, Dan Kelly with the St. Louis Blues when the Blues first started the same year as the Kings in ’67. I could get the Chicago games at night in the winter, Lloyd Petit was doing their games. I could get some games from KDKA in Pittsburgh. So growing up in that part of the North-East, you had the ability to listen at night to a lot of the major market stations that carried the NHL teams. So as I’m sure you can relate to Jon, when you’re starting out in broadcasting, I think all of us have an idea of how we’d like to sound and probably all of us, in thinking about how we’d like to sound, are thinking of people we admired and were an inspiration to us that we listened to. Not that you want to sound exactly like them, but I think you had that kind of mentality until you get older, you get more experienced and then you develop your own style and you get comfortable with the way you call a game and then that becomes your trademark, so to speak.

Nickson, on how his call has evolved:
I’ve always considered myself a play-by-play-first broadcaster, even though I thoroughly enjoyed working with Bob for those nine years on the simulcast back in the 80’s. But in doing the games, just the experience kind of allows you to find your niche in the way you sound, how you sound, what you say, when you say it and all of that. I’d like to think that’s been going on for a number of years. I always think I can improve, that’s for sure. You’re always looking for the right stories to tell at the right time in any given game. Like you know, when we go talk to guys in the room the day of the game and we get our interviews and talk to people, you’d like to think after you gather all that information, that the important stuff you can figure out and you relay that during your broadcast and during the course of a game, much like you would in the course of posting stories. What are the important stories that are worth getting out there? I think you do evolve over time and get into a style. But I still feel to this day that I’m still evolving as a broadcaster and there is still room to grow and room to get better. I kind of go into every broadcast thinking that this is going to be a great broadcast, a ‘perfect’ broadcast. Not so much for me, but for everybody involved with it, which would be my color guy, Daryl Evans, the way the game is going, the stories you tell. You never are going to call a perfect game, nobody is. But I think just the fact that that’s your mindset that helps you achieve maybe a higher level.

Nickson, on whether he has considered his NHL Media Awards Luncheon speech:
Yes and no. It’s been just over 24 hours since I found out and I have been receiving quite a few emails, voicemails, notes on the phone, phone calls at home from various people, so I’ve been more consumed with responding to everybody in a timely fashion. I certainly appreciate everybody’s kind words in that regard. But I was fortunate that most of us with the Kings, with the Kings then, were there, I was there when Bob Miller was inducted in the year 2000. I attended the luncheon and the festivities at night honoring the players. I have a pretty good idea of how it’s all mapped out. I really haven’t thought of what kind of speech I’m going to give. Fortunately I have a few months to think about that. I think right now, Jon, it’s just about continually pinching myself and saying, ‘Is this really happening?’ and being grateful to all the people that have contacted me in the last day or so.

Bob Miller, on Foster Hewitt criteria and the pride in Nickson’s selection:
It’s not only on longevity, but obviously longevity figures into it, and I’m a big proponent of people who have gotten their job and stayed with it and been in the league a long time because I think it also speaks to the volume of work that they do, that they’ve been able to keep the job that long. But it’s not only longevity. It’s on preparation and the way you do the games and how accurate you are and how entertaining you are – all of that fits into it. Of course, it’s a tough thing to do every year because there are a lot of outstanding announcers who are nominated for this or their names are brought up for discussion. So it’s not an easy thing, and everyone’s got an opinion on somebody. But I think this time it was unanimous, that everybody agreed that Nick, starting in the American League – and people sometimes forget this is the Hockey Hall of Fame, it’s not the NHL Hall of Fame. So you go back to when Nick started doing Rochester American games and then the New Haven Nighthawks and then the Kings for this many years. This will be year 35 coming back. And then the other things he does, also, like the postgame talk show. He helps out with the media guide and got the Kings radio network put together. So a lot of things that go into it to give someone an award that appreciates their contribution in broadcasting as far as hockey is concerned, and certainly Nick has done that.