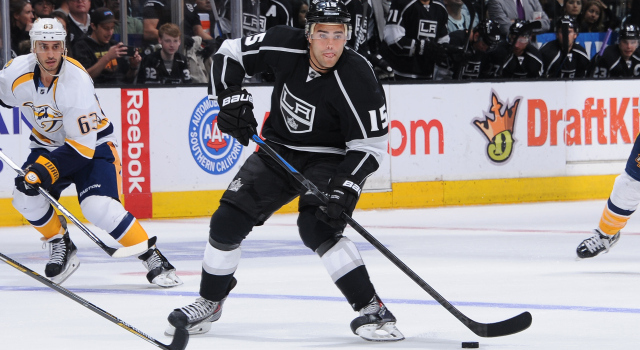 The good: Andy Andreoff cracked the Kings’ roster in a depth role as a waiver-eligible player who could have been claimed by another team had the Kings been inclined to assign him to Manchester. He fought Matt Hendricks on his first NHL shift. It was not an easy season for Andreoff, though, and when a fine shot of his off the rush was fought off by Pekka Rinne and caught the crossbar in a loss to Nashville on March 14, he said the following day that “hopefully next time the next one will go in.” It did! He scored on Mike Smith on March 16 to provide the game’s only goal in a 1-0 win over Arizona that included his first NHL first star performance. “He has to be a guy that plays a really sound positional game and brings energy to our team in a real disciplined sense – getting pucks through the neutral zone and being a good defender and spending time in the offensive zone getting pucks to the net and bringing energy to our team,” John Stevens said. He’s not going to hit any type of a production spike, but there is a modicum of untapped skill in his game, especially with a quick release around the net. For the most part, though, Andreoff is a role player who will ultimately be capable of providing energy, etching out an identity and showing versatility by playing all three forward positions.

The bad: After playing in the final eight games of October, Andreoff appeared in only 10 of the club’s final 71 games, a nearly season-long stretch that included a productive conditioning loan to Manchester that allowed him to get some games in. Ultimately, he fell into a difficult catch-22 situation in which he didn’t get enough playing time to improve the quality of his minutes, and because he wasn’t able to improve the quality of his minutes, he didn’t receive much playing time. His numbers reflected some labor: his 47.5% Corsi-for in five-on-five play was the lowest of any King who had played in at least 10 games, even though his +9.3% offensive zone start ratio was the higher than all players other than Jamie McBain. Of the six skaters he saw the most ice with, all six posted better possession numbers away from Andreoff than with him. Only 2:02 of the 152:12 he logged in 2014-15 was spent on special teams. He just wasn’t playing much and wasn’t able to generate any sort of a rhythm or emerge from the difficult situation he was in, and that’s tough – he clearly had a foot in the door but wasn’t able to fully gain entrance to the castle.

Going forward: Andreoff, whose waiver eligibility was a primary influence in remaining on the 2014-15 Kings all season, will again battle for a spot in training camp. Though he’s currently a restricted free agent, he won’t be expensive – a good thing for a cap strapped team – and should serve as a feisty depth option with NHL experience. At 24, he’s not exactly an infant, but he’s still at the age where those I’ve spoken with in hockey operations still see levels of upside that have not been reached. If he’s able to make a leap from an 18-game body of work to a 60-something game body of work and shows improvement in his analytics and production while continuing to build his identity, it’ll be close to as positive of a season as could reasonably be expected.