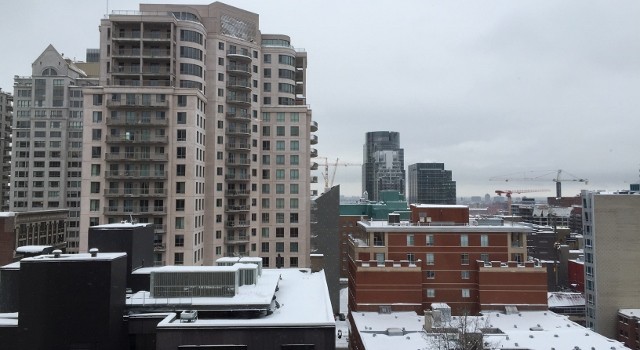 There comes that day in July when the schedule comes out and quickly there are dozens of questions raised. Which Western Conference cities will we visit multiple times? In which cities will we spend additional off-days? Do we have to travel home before Thanksgiving and Christmas breaks, or will we already be there? Do we have to visit Edmonton, Winnipeg, Calgary or Minnesota in the dead of winter? Where will Game #82 be played? Sometimes you luck out (Exhibit A: Two full off-days in Nashville). Sometimes you don’t (Exhibit B: Fewer than 24 hours in Montreal). Strikes and gutters, ups and downs, so says The Dude.

Normally we travel by plane. Not yesterday!

All Aboard @LAKings on our way to Montreal on the rails! http://t.co/oL3SypG1rq

It took roughly two hours to travel from a train station west of Ottawa to Montreal’s Gare Centrale. There was an engine, a players’ car, and a car full of hockey operations and media. Right as we boarded, the Iowa Wild tweeted this picture, which was then re-tweeted by Minneapolis Star-Tribune writer Michael Russo:

.@sutter_brett and his brother Chris address the media following tonight's win! Sutter had 2 goals and was 1st Star. pic.twitter.com/4sfERLeRt8

It’s a bit of an understatement to say that there was a big smile on Darryl Sutter’s face when those on the train showed him the picture.

Because Waking up with the Kings won’t write itself, I’m shutting down this Good Morning post a bit early to hop on that. We’re scheduled to head to the rink at 10:30 this morning, though it’s unclear how many players will take the ice the morning after a late arrival. There’s quite a bit more to come on the second day of a back-to-back, which is also only the second Canadiens home game since the passing of legend Jean Béliveau. For continued coverage of the respects paid to one of the all-time greats, go here, here and here.