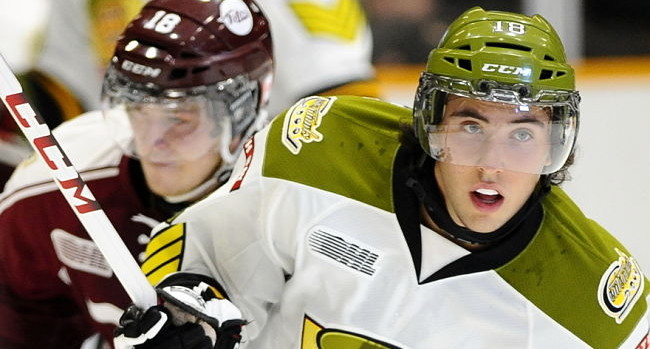 Via PJ Wilson of the North Bay Nugget:

Assistant general manager and director of player development Matt Rabideau said it’s always positive for the team when one of the players is ranked.

“The guys, the coaches, work hard, and it’s a credit to them and to Michael and the training staff,” he said. “It’s a huge team effort.

“He’s being recognized for his hard work, and that’s always a positive thing.”

Another scouting report will be released before the NHL draft, Rabideau said, and “then it’s up to the 30 teams to decide where Mike might fit into their depth charts.

Amadio, he said, is “a highly skilled player. He does magical things with the puck.

“There’s a maturity about him and he’s getting a lot of playing time.”

Michael Amadio, on how he describes himself as a player:
I think I’d say that I’m an offensive guy. I’m responsible in my own end, but I can put up numbers when the team needs [me] to. I think I’d be a top-six forward.

Amadio, on Los Angeles’ success in finding OHL players:
They definitely take young guys in and then produce them into better players. So that’s a good thing for me, a young guy, coming into this process, so I’m looking forward to it.

Amadio, on the strengths and weaknesses in his game:
I think strength is a big for me, and I definitely need to work on that in the summer on and off the ice, so I’m looking forward to it.

Amadio, on any aspects of his game he’d like to improve:
Everything I need to improve on, obviously. You can always get better and I’ll just be working very hard in the gym this summer to improve that.

Amadio, on North Bay’s OHL playoff run:
It was a great experience just learning how the older guys prepared for those games and what it took to win the games in the playoffs, going down. It was a grueling process, so it was just a neat way to learn how to get there and stuff like that.

Amadio, on playing in a city that played host to a relocated OHL team:
It was fun. The fans were amazing. It was a lot different than Brampton, obviously. We got a lot more fan support. The fans were obviously always behind us in the games, too, and especially in the playoffs, it really helped. It changed momentum.

Amadio, on whether there’s anything “extra” getting drafted by the Stanley Cup champions:
Yeah, for sure. It’s just an unbelievable experience.

Amadio, on the competitiveness of playing hockey in Ontario:
You see all the top guys, the first round guys. Like, those are the elite guys, and I get to play against them and just be able to compare my game, like where I am, against them.