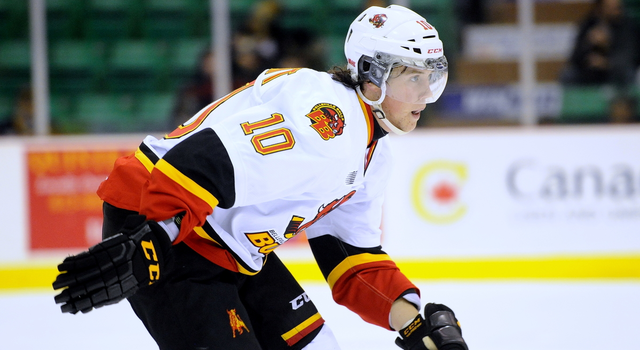 Vice President of Hockey Operations and Director of Player Personnel Michael Futa, on Marchment:
He’s got the same heaviness that his uncle had, and I mean that in a good sense. He’s got to work on his feet. He plays on an Olympic ice suface in Belleville, and it kind of exposes that his feet are not anywhere near an NHL level right now. But his compete level is at the highest level you can possible get. He plays hard. He’s in the right position all the time. And he’s another one of those guys like when we took Kurtis MacDermid – he’s going to die on the tracks. There’s not one thing this kid won’t do to give himself a chance to be a player. He’s got the Marchment blood in him. The game I was at, he fought Hunter Smith, who’s about six foot-whatever, seven foot-eight, whatever he is, and he hung in there and did exceptionally well. The time he did it, because I think the days of just fighting, there’s got to be a purpose to it, and the timing was that he was doing it for the right reason. He was doing it to help his team get a lift. It shows he’s fearless. I spoke to him on the phone. He’s thrilled as well. Mush (Bryan Marchment) came over to him and gave him a big hug and said ‘Thanks.’ I’ve got a lot of time for Mush’s hockey mind, and his background. It’s one of the kids where after we took him, you’re getting a lot of compliments from coaches and GMs in the OHL on how much they liked him and how noticeable they were. Like, (Niagara head coach) Marty Williams had pulled me aside and said, ‘We play them a lot, and we notice him a lot.’ It’s always nice to hear those things.

Via Neate Sager, Yahoo! Canada Buzzing the Net:
Based on his seven-goal, 20-point, 52-PIMs statline in 49 games with Wellington, it doesn’t appear Marchment fights regularly but it is something he has to have in his toolbox. The OHL, of course, has its 10-fight limit to crack down on habitual and staged fighting. There are certain players who, so long as the NHL allows fighters to remain in the game, have to show fighting is in their toolbox. Marchment demonstated that with aplomb.