Jeff Zatkoff, selected by the Kings in the third round of the 2006 NHL Draft, will make his regular season Staples Center debut tonight.

Jeff Zatkoff will start tonight for the #Pens vs LA. Zatkoff began his NHL career with Kings organization.

A veteran of 114 Manchester Monarchs games and 37 Ontario Reign games, Zatkoff was a victim of Los Angeles’ goaltending wealth, having developed in Manchester amidst the ascendance of Jonathan Quick and Jonathan Bernier and during the emergence of Martin Jones, with whom he served in a goaltending platoon in 2010-11 and 2011-12.

An AHL all-star in 2012, Zatkoff signed a two-year contract with Pittsburgh in July, 2012 and recently re-upped for two additional seasons. Barring any movement, he’ll be property of the Penguins through 2016.

“We’re going to split these two games with the goaltenders,” Pittsburgh coach and former Los Angeles forward Dan Bylsma said this morning. “I looked at previous records and success against both of these teams and Jeff obviously playing against his former team and organization. When I told Jeff he was going to be playing this game yesterday – he was pretty excited about it. I think I’m glad I told him yesterday because he got excited about it yesterday and settled into the task today.”

Zatkoff was a teammate of Alec Martinez’s at Miami University for three seasons. Along with Chad Johnson of Boston, Frederik Andersen of Anaheim, Alex Stalock of San Jose and Thomas Greiss of Phoenix, he is the fifth back-up goalie the Kings have faced in the last seven games. 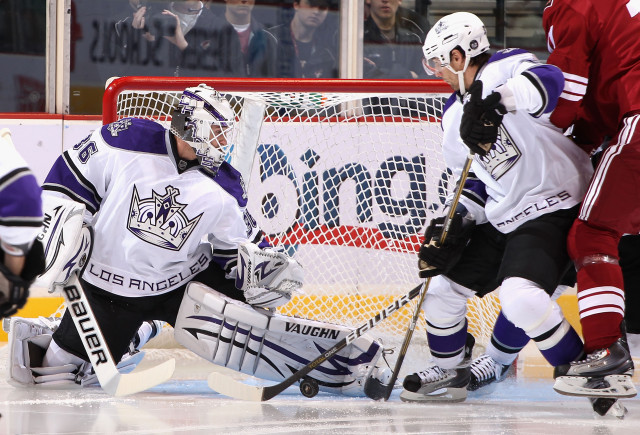