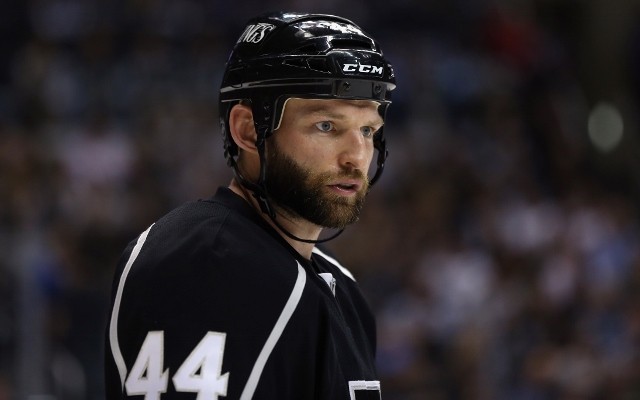 Darryl Sutter indicated that the slight injury Dustin Brown suffered during an on-ice drill on Thursday is located in his hamstring and shouldn’t have a major impact in preparations for the upcoming season.

Though the Brown-Kopitar-Williams line has developed has developed evident chemistry over the previous seasons, training camp is still needed to re-cultivate the harmony after three months off, and Brown’s absence provides a slight complication.

“It’d be naïve to think that you’re going to come in and take off right where you left off,” Anze Kopitar said.

Tanner Pearson skated with Kopitar and Williams on Friday. The 21-year-old will be taking part in one of the more identifiable battles for a roster spot after making his NHL debut with a five-minute, 44-second performance in a Game 3 loss in San Jose during the Western Conference Semifinals.

Robyn Regehr underwent off-season surgery to remove a bursa in his elbow that provided quite a bit of discomfort late in the 2013 postseason.

It began when he suffered a cut that gradually became infected during the team’s playoff run. After the bursa was removed, he was on intravenous fluids that kept him in Los Angeles for an additional two weeks under the care of a nurse.

“It wasn’t really an issue in the first two rounds. By the third round it was getting pretty bad, and having to get it aspirated a lot and deal with it. That way it was getting pretty serious because of how bad the infection had gotten, so it was pretty uncomfortable by then,” Regehr said. “I was very glad when it was able to be taken care of, and like the trainer Chris Kingsley said to me, ‘I hope we never have to deal with that again.’”

A scar represents the only ill effect of the surgery – one of several battle mementos weathered by the NHL veteran.

“He had his nose broken in the St. Louis series, and then he got cut in warmup [in Game 2 of the Chicago series], and through that he was playing with the elbow, and then it was just getting worse,” Sutter said. “Both him and Greener, when you think about it, after their surgeries, they had two weeks carrying a friggin bottle around with them. You know, they had the nurse there every day for two weeks after the surgery.”

Regehr’s recovery provided an additional challenge in the compacted summer and pushed back the date that he had planned on returning to Buffalo for several days to fully move out of the house he owned while a member of the Sabres. The time at his house in Saskatchewan – where he has a gym – was limited, adding urgency to his off-season preparation.

“Once I was cleared and able to do things, it was just game on and go as hard as you can,” Regehr said.

His preparation now continues into the first week of training camp.

“The things that we’re working on are really just a very big refresher course on all the things that we want to do as a team,” he said. “So we’re going through everything from defensive zone coverage to neutral zone, and tomorrow we’re going to be going over the forecheck and things like that. Special teams, we’re watching video, we’re trying to execute in the drills out on the ice to just get those things ingrained so we don’t have to think about it. You just go out there and do them. That’s the way you want to be. You want to have those so they’re just natural, and you really don’t have to go out there and say, ‘What do I have to do? Where do I have to be?’ – anything like that. You just know. I think that the team that is the best at doing that will have a good start, and a good start is very important.”

“I think he’s pretty settled,” he said. “You know what, he came in and did such a good job for us and just went about his business and played hurt. Did a really good job for us, and now he’s a guy that’s used to being well-trained, ready, and he’s well-trained, and he’ll be ready.”

The Kings are preparing to play in front of a sold-out crowd for all 41 regular season home games.

“I know we haven’t had this kind of demand since the Gretzky days,” said Josh Bender, Senior Director, Ticket Sales and Service.

The team capped non-premium season ticketing in July, which according to Bender, was the earliest it had ever been capped in team history.

Instead of a formal waiting list for season tickets, the team directs fans towards 10-game and 21-game ticket packages, which can eventually be upgraded to season tickets for the 2014-15 season.