The Edmonton Oilers, who did not finish above third place in the Northwest Division between 2001-02 and the mediocre division’s farewell season of 2012-13, will join the Pacific Division with improved credentials to strive towards their high ceiling.

Expectations that the Oilers’ back-to-back-to-back first overall picks would lift the club towards the Western Conference’s elite teams thus far have resulted in a 2012-13 preseason prognostication that they were the third-best team in hockey – and little else.

After flirting with a playoff spot for the first three quarters of the 2012-13 season, Edmonton suffered through a 1-9-0 stretch that dropped the team out of playoff contention and into 12th place in the Western Conference. They selected seventh overall at the 2013 NHL Draft.

The disappointing finish – and abysmal puck possession and shot metrics – cost Head Coach Ralph Krueger his job after a 48-game tenure. Former Toronto Marlies coach Dallas Eakins, who will look to improve upon a negative-six shots on goal differential – tied with Toronto for the league’s worst – takes over the reins of a team that appears to be navigating that blurred span between advanced rebuilding and contention.

He’ll have a stable of young, dynamic forwards at his disposal. Taylor Hall, who has 145 points in 171 games spread across his 19, 20 and 21-year-old seasons, is a world-class skater with excellent hands who is unafraid to work in difficult areas and represents much of what teams covet in a first line left wing. 23-year-old Jordan Eberle has scored 68 goals in 195 career NHL games and boasts a remarkable 14.4% career shooting percentage. Nail Yakupov turns 20 the first weekend of the regular season and will look to build off the success of his 31-point rookie season in which he posted six goals over his final three games. He should be viewed as a major breakout candidate. 24-year-old Sam Gagner had been a model of consistency until his encouraging 2012-13 season in which his 38 points in 48 games translates to 65 points over a full 82. In his five previous seasons, he finished in the range of 13-18 goals and 41-49 points.

And then there are some question marks up front. Ryan Nugent-Hopkins, selected first overall in 2011, has missed time due to shoulder injuries in each of his first two seasons and may not be available come October due to April surgery to repair a torn labrum. David Perron, acquired in July from St. Louis for Magnus Paajarvi and a second round draft pick, has rebounded satisfactorily from a concussion that kept him away from the game for much of 2010-11 and part of 2011-12, though he has been plagued by inconsistency and has one goal on 28 shots and a minus-7 rating over the last two postseasons.

This is the type of backchecking Kings fans associate with Perron:

It’s not entirely fair to base Perron’s value heavily on his showings against Los Angeles over the last two years, though it’s accurate to say that he doesn’t possess the hardened skill set that the Oilers have desperately needed: that of a gritty, defensively attuned center to slot in the top two lines. Edmonton needs a Mike Richards like King Richard III needed a horse.

The addition of standout defensive center Boyd Gordon helps out the team’s center depth, though there still appears to be deficiencies in the team’s third and fourth lines, which haven’t been a particularly strong asset over the last several seasons. Also in need of improvement is Edmonton’s faceoff percentage, which clocked in at a league-worst 46.1% last season.

The defense is improving, though still appears to be short on one traditional stalwart stay-at-home, minutes-eating type. 6-foot-3 Ladislav Smid has flown under the radar in that type of a role; he led the team in hits and blocked shots last season, and should improve upon his 20:19 average time on ice. As a 27-year-old veteran of seven NHL seasons – all with Edmonton – he should be stepping right into his prime years.

Justin Schultz is a mobile quarterback and playmaker, and as a 23-year-old who posted a 27-point (8-19=27) rookie season, it’s not a stretch to think the former University of Wisconsin star could develop into one of the game’s elite offensive defensemen. More importantly than his production, he’s going to have to improve his play in his own zone after finishing last on the team with a minus-17 rating a year ago.

Andrew Ference is an intelligent and poised well-rounded defenseman who will certainly help the back end after signing a four-year contract in July. Still, the Oilers’ blue line does not compare favorably to that of Los Angeles, San Jose, Vancouver and Phoenix in the reconfigured division.

Devan Dubnyk is gigantic. At 6-foot-5, he’s an effective modern goaltender who stopped 92% of the shots he faced last season. The 27-year-old has never played in more than 47 games in any of his four NHL seasons, and though it shouldn’t be a surprise to see him emerge as among the conference’s better goalies, he still has to answer questions about his usage and consistency. The Oilers really shouldn’t have much concern in net.

In the latter parts of their rebuild, Edmonton developed into a team that possessed excellent speed and an amassment of burgeoning young forwards. Cultivating the commitment of those forwards in all three zones will be one of Eakins’ primary challenges this season.

*interestingly, northern outpost Edmonton will travel 3,778 fewer miles than Calgary, according to On The Forecheck. 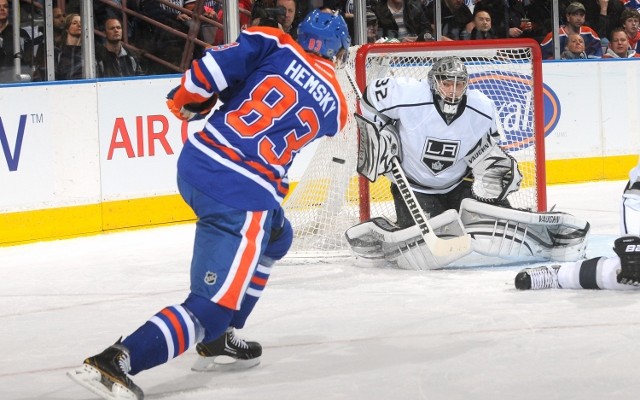