I Was There #10: Toffoli's first goal - LA Kings Insider

I Was There #10: Toffoli’s first goal

KingsCast is almost finished with a similar endeavor, complete with screen grabs, video highlights and commentary. Alex Kinkopf’s #TopTen list is recommended as a great chronicle of the 2012-13 season, and I’ll continue to link KingsCast articles to the corresponding spots on my own list.

I didn’t want to make this list about the best “games” or “stretches of play” of the season. Instead, with the exception of the banner raising ceremony and White House visit – which will both be included – this is more of a depiction of the 10 best plays and moments of the season as judged by on-ice aesthetics and whether it will generate any lasting impact. I’ll also include a list of honorable mentions once this project is complete.

I Was There #10: Tyler Toffoli scores his first goal

Before we had even settled on Tyler Toffoli’s nickname (and learned his NSFW nickname), he had already scored twice and was more often than not flashing glimpses of the player the Kings expect him to develop into.

Toffoli registered one shot on net, missed four shots and had one blocked in his NHL debut in a 5-2 win over San Jose on March 16. Two nights later he scored his first career goal and added an assist for a multi-point effort in a 4-0 win over Phoenix. He was named the game’s third star in his second NHL game.

Here he is, taking whatever frustrations he had out on Mike Smith’s Gatorade bottle:

Aesthetic beauty: Moderate-to-high. It’s a power play goal, and Toffoli is unmarked to Smith’s right. The most impressive part of the way the play developed was Toffoli’s patience and hand-eye coordination as he waited for the puck to bounce to him after Jeff Carter had deflected it in his direction during a puck battle with Michael Stone. So, to recap, there was strong positioning, a bouncing puck, a top-shelf finish, and Jim Fox saying, “Can you say…sniper!?” Not a bad first week on the job for the then-20-year-old rookie.

Lasting impact: TBD. Obviously Toffoli will always remember this one. Whether this truly becomes an “I Was There” moment won’t be revealed until we get a better picture of the player Toffoli grows into. At the time, it was an important insurance goal that backed Jonathan Quick’s 27-save shutout and followed several near-misses from the previous four periods he had played in the NHL. Though Toffoli got Smith to slam his stick on the ice, Smith isn’t exactly known for his calm, balanced reactions. 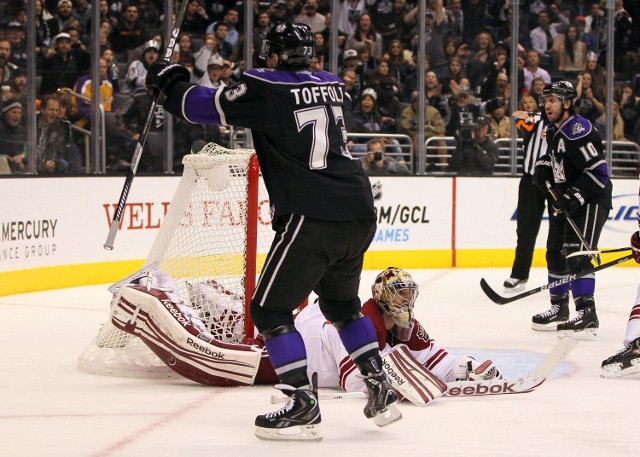