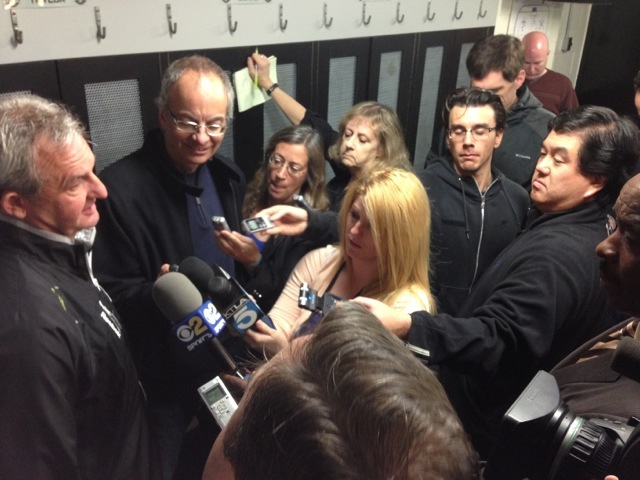 On whether he thought this series had the potential to go seven games from the outset:
“Yep. Why not? I think every series has the chance to go seven. Somewhere between four and seven.”

On the value of playing Game 7 at home:
“I guess cause we’re here, quite honest, there’s some value in it. I know the importance of winning a series is always better at home. Not so much Game 7, but winning a series, because it might just at one point get one center against one centerman, or a defensemen-forward matchup that you want, that you have that. That might be the biggest advantage. Quite honest, it’s changed so much from before the last CBA, right? In terms of the advantage of home ice and that it basically took it out, other than there’s two or three times where coaches can impact during a game, and that’s basically what you look for.

On the team’s ability to push back and generate winning intangibles when necessary:
“That’s not an issue, quite honest. The deciding game, the game where somebody has a chance to win the series, it doesn’t matter if it’s the fourth game, the fifth game, the sixth game or the seventh game. It’s the very same. It doesn’t make any difference. It shouldn’t make any difference to your team. So that’s how you try and move the team forward with that, and our team’s been good at that.”

On the romantics and “something charming” of Game 7s:
“We always played game 7s…You always played Game 7s. But the difference in it when you’re doing it at a higher level is there’s a little bit of attrition involved in it, and there’s a little bit of not having everybody at 100%, always, Game 7s. That’s the advantage of shorter series, obviously, right? So that always goes into it, too, and how as a player you manage that. You’re banged up.”

On whether Game 7s are where he misses the game and wants to play:
“I’m not saying Game 7, in fact, but there’s always guys that are better in those situations, always. It’s proven. The best part.”

On how to keep the team focused and not distracted by “hype”:
“Well, they have to. It’s not that they don’t hear it or handle it. That’s part of it. Last year when we took the team downtown, everyone thought it was to lock ‘em up or something. No, it was the other way. They never got to see what was going on. They never got to go to the big rink the day of the game. They never got to walk and have people talk to ‘em. They came to the practice rink and then went back to the beach. That’s the difference. That’s what you want ‘em to experience. You want them to experience it. Quite honest, hey, what’s tomorrow night? It’s 50-50. We might win. We might lose. Somebody is going to win. Somebody is going to lose. That’s for sure, right? But you want them to experience that, because that’s the best part of it.”

On San Jose’s start in Game 6:
“Actually, we had a really good start last night…Really good. [Reporter: Until the penalties.] Well, is Cliffy’s a penalty? So we were pretty good. We’ve played the last three games the way we want to play.”