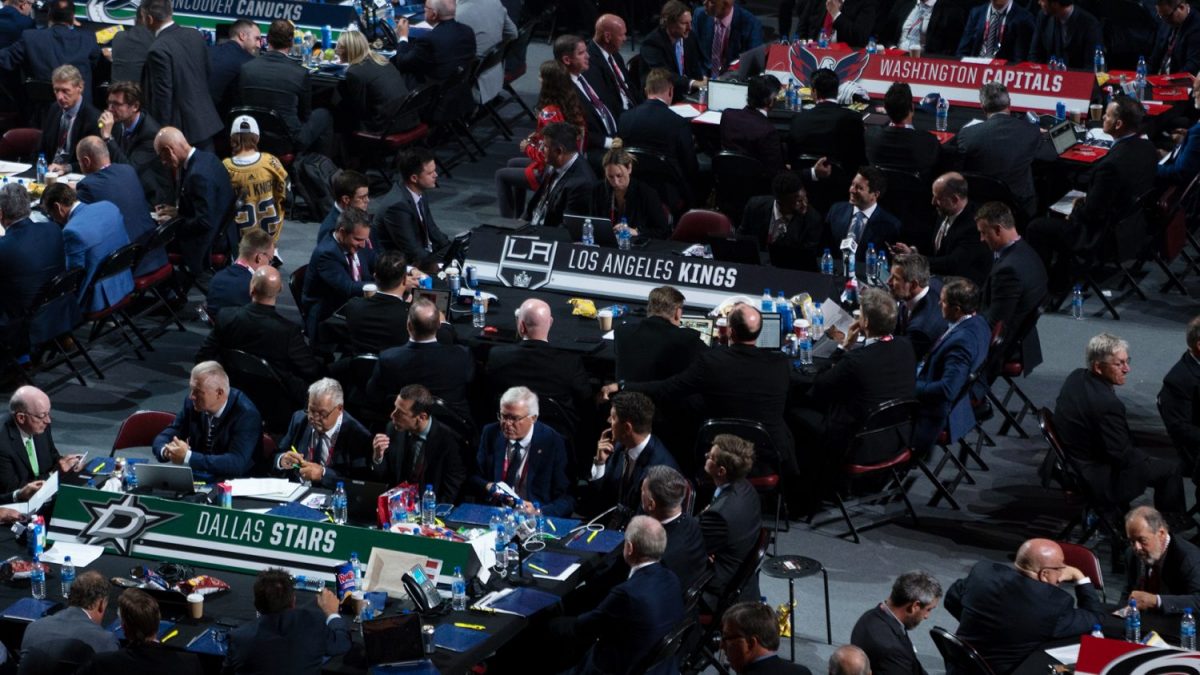 Playing the hand they were dealt, the LA Kings took a different approach to the 2022 NHL Draft than what fans have seen from the team in previous seasons.

During a four-year span from 2017-2020, the Kings focused on ‘restocking the cupboard’ so to speak, drafting early and often with at least seven selections each year that included a total of five first round picks and six second round choices.

The 2021 year was a departure from that methodology, with limited viewings and less data on the young crop of talent, the club chose to go with a quality over quantity approach, making just four picks that all came in the first three rounds and the first 84 selections.

But this week’s 2022 event required a different strategy for multiple reasons. First and foremost, the team came into the week in Montreal with five selections, none of which were in the first 50 picks. It was for good reason, last week’s trade with Minnesota to bring in highly coveted scoring winger Kevin Fiala made excellent use of this year’s first round selection, paired with 2020 second-round defender Brock Faber to swing the deal. LA was also down a seventh-rounder after moving it to Detroit prior to March’s trade deadline for blueliner Troy Stecher.

In addition, the franchise has moved past the first few steps in its plan to reshape the way it competes moving forward. The young players prioritized over the last five years have come in and made an impact, helping the team qualify for the postseason in 2022 for the first time since 2018. Homegrown draft picks like Arthur Kaliyev, Rasmus Kupari, Tobias Bjornfot and Quinton Byfield have begun making an impact at the NHL level. Others are right behind them knocking on the door like Samuel Fagemo, Jordan Spence and Alex Turcotte. Add in recent young signees like Brandt Clarke, Martin Chromiak, Samuel Helenius and Francesco Pinelli, and you can see that the club is in a position to remain competitive for years to come.

So without any early selections and no need to rush any of this year’s draft eligible players along in their development, the team adjusted its plans to think longer-term.

As a result, three of the seven players selected are planning to play college hockey, generally a path towards longer development, and a fourth, second-rounder Jack Hughes, has already completed his first year at Northeastern University as an 18-year-old freshman. Fourth round choice Kenny Connors plans to enroll at UMass-Amherst, and sixth round selections Jared Wright and Jack Sparkes are expected to suit up for Colgate University and Michigan State, respectively.

Others, like fifth-rounder Otto Salin and seventh round choice Kaleb Lawrence, have missed significant development time due to injury and haven’t put up eye-catching numbers, but have shown NHL-like attributes that can be improved over time to give them a shot at making an impact at the highest level.

After the draft concluded on Friday afternoon, Kings’ Director of Amateur Scouting Mark Yannetti elaborated on the strategy that he and his scouting staff put into place to potentially fill roles on the team further out into the future.

“Now we have an age distribution gap, linear, with a couple of those guys who are four and five and six years out,” Yannetti said. “We can take these guys and move them to the back because there’s going to be four or five guys on our team now that aren’t with us in the next six years. We don’t need to fill the holes year one, year two, we want to fill them four and five years from now.”

Yannetti also spoke about the team’s confidence in its development staff, led by Director of Player Development, Glen Murray, and their comfort level in taking a young player that has room to improve and doing the hard work to see them reach their potential.

When discussing Sparkes, who played with the St. Michael’s Buzzers in the Tier II Ontario Junior Hockey League last season, a path that is well-known for producing defenders like Brent Burns, Mark Giordano and more recently Mario Ferraro and Kings defender Sean Walker, Yannetti felt there’s a lengthy development window for the staff to work with.

“We thought there was a little bit of risk/reward with Sparkes and when you’re looking at sixth and seventh round picks, you’re looking at a single-digit success rate,” Yannetti said. “Why not let our development staff, arguably a top tier development staff for 15 years, those guys get him for five years potentially. If anybody can develop a later-round guy, it’s them. It’s a pick with them in mind.”

Similarly with Lawrence, who is said to skate well for his large frame at 6-foot-6, 225 pounds, played just two games with his junior club, the OHL’s Owen Sound Attack due to injury.

“He’s missed a year and a half of hockey with the OHL not playing during COVID and him having a shoulder injury, it was the perfect storm for the poor kid not to play for a year,” Yannetti said of the 19-year-old Ottawa native. “He wasn’t a complete secret, because Chris Byrne (LA Director of CHL Scouting) had seen him practice and skate recently and our medical guys had gotten his injury report so he was vetted on the injury and Chris had seen him really handle the puck well. “He’s a long shot to make it, but he’s got some attributes that you don’t find in bigger players and he’s still in the 16-year-old part of his development curve from the years he missed. So again, our development staff gets their hands on him for multiple years.”

But in the case of Hughes, the team’s first selection of the event who was seen in many high-profile viewing opportunities, not only while with Northeastern where he was named to the Hockey East All-Rookie Team but also for two seasons prior when he was with the US National Team Development Program, Yannetti was happy to see him still available when it was finally his team’s turn to make a selection at No. 51.

“I assumed based on central scouting and the other lists that Jack would go between 26 and 33,” Yannetti said. “So when you get a player like that at 51, you’re pretty happy. And then you look at the development situation, for me, that’s a high confidence pick. Northeastern’s as good as it gets developing guys. They’ve moved themselves into that North Dakota, Minnesota level of developing among colleges.”

The most impressive thing for Yannetti about Hughes is his hockey sense, which is sometimes tough to define, but the 16-year member of the Kings front office did his best to break it down for us.

“He’s got a hockey IQ, an instinct and feel, so the way he sees the game, the way he moves the puck, the way he recognizes space,” Yannetti said of Hughes. “He played in a league he shouldn’t have played in this year. If he wasn’t the youngest, he was the second-youngest guy in college hockey and he’s playing in a tough Hockey East. His sense got him through that league and he was able to play some top-six minutes as a freshman for a top team in the country. His sense really drives his game.”

The common theme among all these new additions to the organization’s system is that there won’t be a way to measure their impact until years down the road. While that is the case for every entry draft, it’s even more evident this time compared to what the Kings have been fortunate to see after recent drafts that have yielded players with a more immediate presence on the NHL roster and at the minor professional level.

“There’s a lot of projection in the picks and there’s a lot has to go right, but you just need one or two of those guys to make it,” Yannetti said. “Then they can fill in a hole that’s going to be left by what we’re going to do in our next three to four years of turning from bottom feeder to playoff team to contender. That’s what the plan was, that’s what the hope is. It’s a smart plan, now it’s just get your crystal ball and wait five years.”

By Jack Jablonski
95 Comments
Looking to the Future