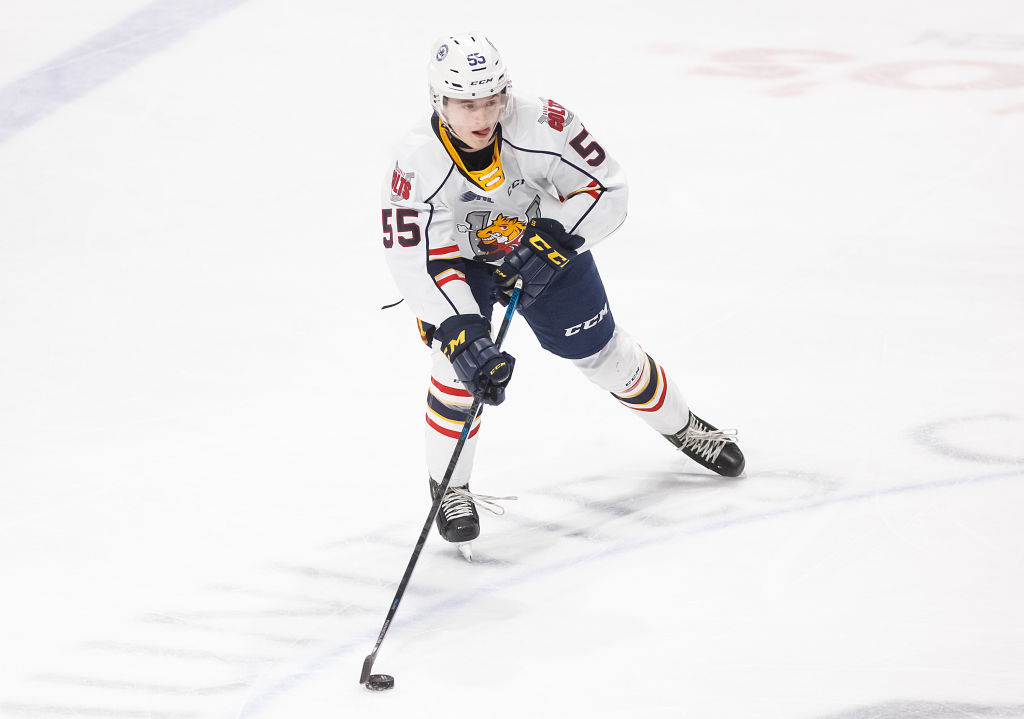 Seems like a theme is building here, doesn’t it?

The Kings took a “quality over quantity” approach to this season’s NHL Draft, with more from Director of Scouting, Mark Yannetti, HERE. They sacrificed fourth, fifth and sixth-round selections via trades to move up twice in the second round and once in the third, in order to get players they came in knowing they wanted. Combine that with defenseman Brandt Clarke falling to the Kings at eighth overall on Day 1, and the Kings walked away happy with four selections who fit well into the team’s plans moving forward.

Here are several outside perspectives on the Kings 2021 Draft Class.

Chris Peters, Hockey Sense – via All The Kings Men Podcast
I think, just because of the smallness of the class, [the Kings] will be in a B+ range, and that’s just because you only get four prospects, however, all four of the players the Kings selected were on my draft list. They’re all guys that I believe will be good players. Clarke and Pinelli were both first-round grades for me, Pinelli slips into the second round and they get him at a really good range. I had Helenius as a Top 60 guy and certainly Kirsanov, who I had right outside of the first round, I really like him as well. I think what the Kings did, they did get quality over quantity, and that’s why [they’re] in that A-/B+ range. They got a top-end defenseman, two quality centers who can play in various spots in your lineup and another shutdown defenseman who’s already playing significant minutes in the KHL.

Corey Pronman, The Athletic
Pronman ranked the Kings as a B+, as one of just six teams with that grade or higher. He had both Pinelli and Kirsanov among his “Top 15 available on Day 2” list, and the Kings walked away with both.

The Kings only ended up with four picks in this draft because of various moves, but I think they made them count. Brandt Clarke is a great prospect. Kirill Kirsanov and Francesco Pinelli both have a lot of ability. And I could see Samuel Helenius plugging into the tail-end part of a lineup. Kirsanov slid due to conditioning and signability concerns, but I had him highly rated. I could see L.A. getting two or three quality NHL players from this group.

Scott Wheeler, The Athletic
Wheeler had the Kings as the draft’s fourth-best team on Day 1 and the third-best on Day 2. With just four picks, that naturally means that he believed in each of them, as indicated below.

Clarke was always the best-case scenario for the Kings. Not only was he the best-player available on my board, but in a Kings pool that is unmatched league-wide at forward and loaded on defence, the only thing that was missing was a dynamic, playmaking D prospect, the two things that Clarke is. Clarke is an incredible talent who breaks ankles laterally, roves like a fourth forward, wants to take over the game, and plays a very vocal, I’m-in-charge style out there. His wonky skating mechanics and underdeveloped frame and athleticism raise some question marks, but neither his skills/skating coach nor his strength coach are concerned about them and there are OHL people who think he’s the best player in this age group.

The Kings have the best prospect pool in hockey and they just keep adding to it. Part of that comes from just how many selections they’ve made in recent years. But they don’t build what they’ve built without also making good on a lot of those picks and the Francesco Pinelli selection at 42 feels like another feather in their cap. They’ve got an embarrassment of riches up front in their pool, which will make his path to his second-line upside a little more challenging than elsewhere, but he was one of my top-ranked players (24th overall) and I love their continued insistence on slippery, two-way possession types.

The above also made their selection of Samuel Helenius an intriguing one because despite being 6-foot-6, he actually has some uncharacteristic ‘small’ skill for a player that size. I had him ranked 74th, so 59th was probably a little too early. But that was more or less the tier he belonged in. It’s going to be hard for him to be productive and play in an offensive role at the next level. That’s just the reality for forwards that big. There aren’t many who are more than depth pieces. But he’s got enough skill to become that and his attention to detail and leadership are both revered.

The hits kept coming for the Kings in the third round with their selection of Kirill Kirsanov 84th-overall. At that point, Kirsanov was my fourth-ranked player (50th). He’s not the kind of player who is going to finish off a lot of plays inside the offensive zone, or even break teams down to create the finishing play for someone else. But he’s a smooth skater who beats pressure laterally through neutral ice, leads a lot of transition sequences with a quick few steps into an outlet pass, and defends with a polish that is rare for a player his age. There’s two-way value there.

Considering they only had three picks, it’s another year of winning at the draft for the Kings for me.

Sporting News
The Sporting News also gave the Kings a B+ draft grade, though were a bit friendlier overall with their grades, giving 11 teams that ranking or higher. Still, at worst, that puts the Kings in the top third, and likely on the higher end of that scale.

Like the Hurricanes, good drafts are pretty much expected for the Kings. With just four selections, they didn’t add as much as they have in past drafts, but they made it count. This is highlighted by Clarke, an offensive defender that was in the discussion for the No. 1 spot. It was surprising how far Francesco Pinelli fell, but it was right into the laps of the Kings at No. 42. They also added Samuel Helenius and Kirill Kirsanov, two boom-or-bust prospects but with promising ceilings.

Bleacher Report also gave the Kings a B+ for their draft, but did not go into any further details.

ESPN
ESPN only reacted to the first-round picks, but gave a strong review of the Kings’ selection of defenseman Brandt Clarke at eighth overall.

Clarke – How he fits: Clarke joins arguably the deepest prospect pool in the NHL with the Kings. But as deep as that pool is, it has more big fish at center and wing than on the blue line. Given that need, and GM Rob Blake’s legacy as a Hall of Fame defenseman, this was one of the draft’s most predictable picks. Given his hockey sense and offensive awareness, there have already been comparisons for Clarke to the kind of impact Adam Fox has had early in his NHL career with the Rangers. Fox just won the Norris Trophy. No pressure, Brandt. — Wyshynski