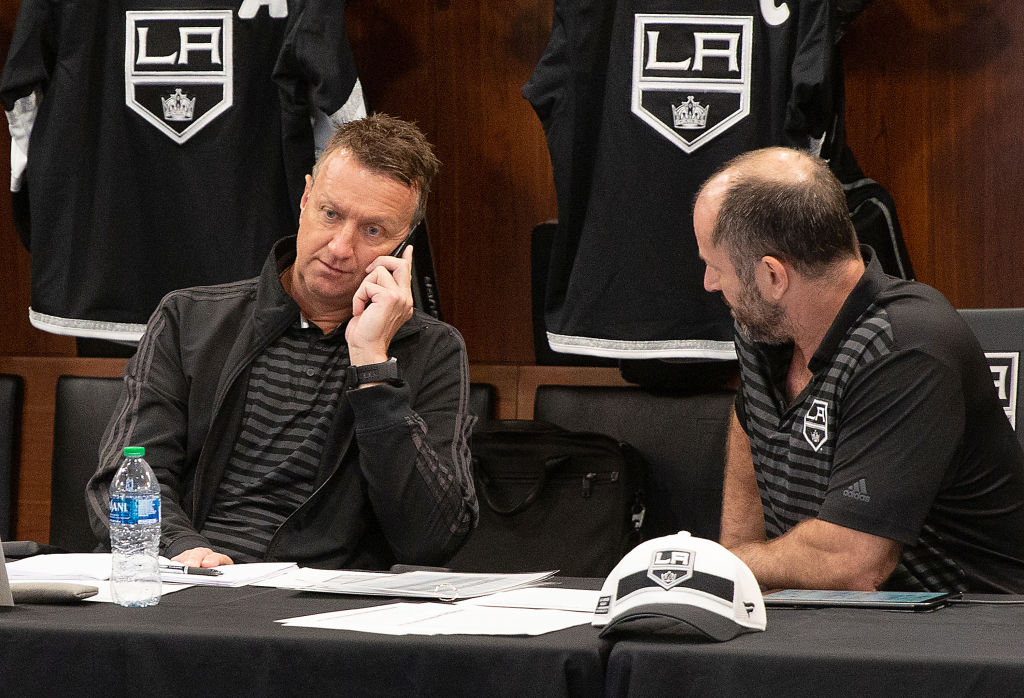 He called this season his “favorite draft ever”, because of how well the Kings executed the plan they put in place they had going in.

The Kings made three selections on the second day of the draft, made four picks in total, and acquired two forwards with AHL experience. It was a day of wheeling, dealing and adding quality prospects into the mix, with a variety of different skillsets and abilities.

“Things fell into place for sure, and especially after seeing the first and the calls that were made last night, there was a lot of optimism on our side of being able to implement that type of strategy,” Yannetti explained. “We had been talking about it for quite some time, over the last couple of weeks leading up to the draft, how we wanted to implement a more aggressive, a more move-up centric strategy, and the plan played out.”

With limited information available to teams in some instances this season, the 2021 draft was unique. Certain teams opted to acquire more assets, and additional draft capital – Yannetti used Carolina as an example – to give themselves additional opportunities to hit or miss. The Kings’ approach was to zero in on the players they wanted to draft and to make sure that those players wound up coming to Los Angeles.

In that department, the Kings went 3-for-3, landing a trio of players who were ranked higher internally than their draft slot represented. From Yannetti’s perspective, that’s a victory.

“Every single guy we moved up for was the guy that was targeted with that plan. Every time we moved up, we were moving up for a specific guy, and we got that guy.”

Room Traders
So who did the Kings walk away with at the end of the day?

First, the Kings selected a player who was projected by many to go in the first round in Francesco Pinelli. Pinelli was generally ranked in the 20’s by the external draft evaluators. A skilled and crafty forward, Pinelli spent this past season playing professionally in Slovenia, with the cancellation of the OHL season.

Yannetti noted that many had a first-round grade on Pinelli, and to snag a player like that where they did in the second round represents a solid get for the organization.

“Here’s a guy who was projected to go in the Top 15, 20 by multiple lists, and we started to see him fall, we started to formulate a plan to get up to him,” he explained. “There’s a guy who is a higher-skill guy, his skill is always thought of as higher-level…if he can address his deficiencies, you’re penciling in a Top-6 winger, if not better. He would slot in slightly under Kaliyev, who we have the benefit of a couple of years of information. He’s a playmaker, he’s slightly different in how he does it, but in terms of his tools, he would slot in at the higher-end of our prospects.”

Looking at Samuel Helenius, who the Kings selected with one of the final picks in round two, the Kings added a center with size, who played this season in SM-Liiga, one of the world’s best professional leagues. Helenius played more than 50 games, giving the organization a full sample size on him, which can’t be said for many players who were drafted today.

Helenius produced respectfully as a young player in a challenging league, and also represented Finland as an under-aged player at the World Juniors in January, collecting a bronze medal with two goals and four points from seven games played. Helenius brings something a little bit different to the prospect pool, with Yannetti saying the Kings were drawn to his size/skating combination, along with the way he’s able to produce complimentary offense in a potential third-line role.

“This kid is already an NHL skater, and he hasn’t even come close to growing into his body,” Yannetti said of Helenius. “When his body catches up to his feet, we look at him being an above-average NHL skater and he’s six-foot-six. He plays a hard, heavy game. He leads with compete and physicality to go along with his skating. If you watched at the World Juniors, while offense is certainly not the primary aspect of his game, he possesses a really good shot. When you start looking at the third line, in terms of creating offense, you usually see a little bit more individualistic…you see more direct plays going in the net. A kid like this, who can get to those areas and use his size and his shot to provide secondary offense, that kind of fills in the way we view a middle-six in terms of trying to find offense there.”

Lastly, the Kings traded their final two draft picks to land Russian defensive prospect Kirill Kirsanov in the middle of the third round. Kirsanov fits the theme of drafting players with professional experience this season, with his season in the KHL perhaps at the highest level of any player selected. Kirsanov was a regular with SKA St. Petersburg, one of the league’s top teams, with Chris Peters reporting that he logged more than 20 minutes five times, signaling that he played a legitimate role on the team.

Like Helenius, Kirsanov skated in the World Juniors during his draft year, two years younger than other eligible players, and collected a goal and an assist as he logged more than 20 minutes in three of Russia’s final four games, an indication of his evolving role throughout the course of the tournament.

“Really strong defensive play, very mature game that way,” Yannetti said of Kirsanov. “He has some physicality, though it manifests itself a little bit more in a heavy presence, an ability to control opponents, rather than a ‘run you over’ type of physicality. Very good straight-line skating. This is an 18-year-old kid who played in the KHL, and he played real minutes. Then, he goes to the World Juniors and he becomes their number-one defenseman in our opinion, by the end of the tournament. He was able to play the exact type of game we like, in that type of a role, as a young kid, against the highest level of competition he could possibly play against. Then, you throw in the fact that he moves the puck quickly, we liked his hockey sense.”

Don’t Take Him For Brandt-ed
We touched on the Kings first-round selection HERE, with thoughts from the newly selected Brandt Clarke, and Kings GM Rob Blake, and today we got Mark Yannetti’s thoughts on the organization’s newest defenseman as well.

When speaking yesterday with Blake, he noted that the team originally had thoughts of moving up a spot or two in the draft, with an attempt to lock in the player they wanted. Yannetti confirmed a similar notion today and said that the team had two options to move up before the draft even started, but he wasn’t positive he’d get a player in the tier they wanted to.

A move ultimately did not come to fruition, and the Kings were able to land Clarke at number eight, a few spots later than where they had him in their rankings.

“We got the player we wanted in the tier, and we had players that we wanted in that tier, so we were guaranteed to get at least one of that tiered player by not moving,” he explained.

Yannetti has spoken in the past about valuing traits in players which he believes to be elite, rather than selecting an overall package that might be greater, but without anything that stands out at a higher level. In Clarke, the Kings drafted a player with a few of those tools, a player who has been labeled as the top available offensive defenseman in the draft.

With the draft now in the books, the Kings look ahead to free agency next week. Qualifying offers are due to the league on Tuesday, followed by the opening on unrestricted free agency on Wednesday.

As Blake noted yesterday, the Kings are still in the market for improving their roster at the NHL level, adding he’s still interested in adding another player at the forward position, on top of Viktor Arvidsson. That addition could come via a free-agent signing, or via trade, keeping the Kings as an exciting team to watch as we move through the offseason.

By Jack Jablonski
173 Comments
Looking to the Future