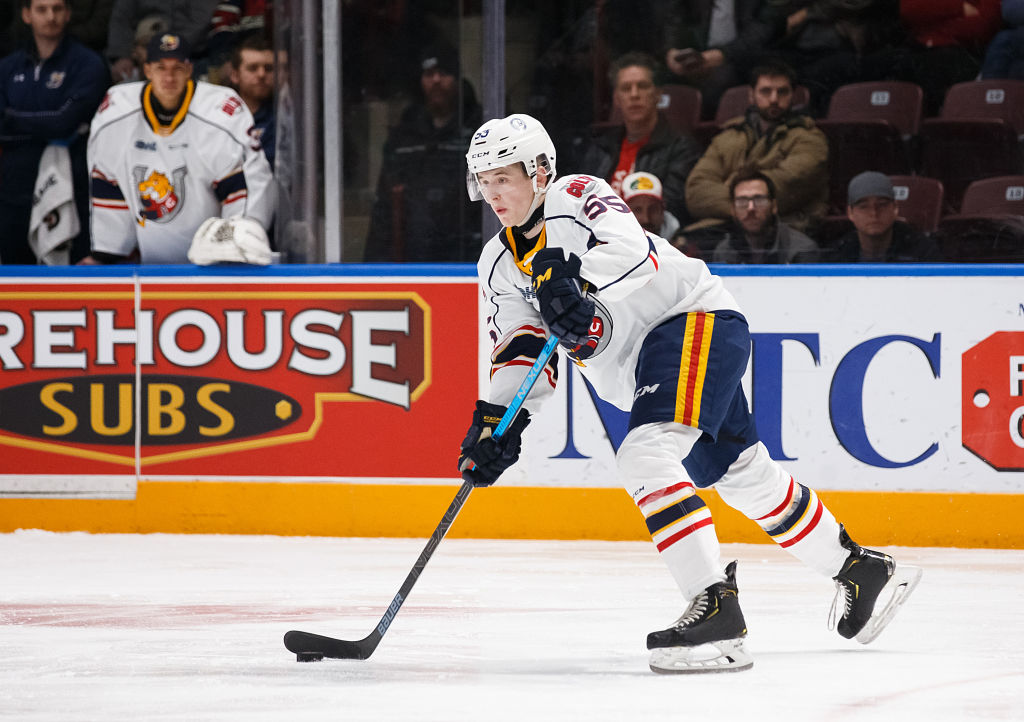 Insiders, Day 1 has come and gone, and Brandt Clarke is the newest member of the LA Kings organization. A look at three takeaways from the first day of the draft, including thoughts from Clarke and General Manager Rob Blake.

The Great Eight
Entering this season’s draft, the Kings had substantially more unknowns than last. Less than a year prior, selecting second overall, there were realistically just three names to focus on, with the Kings selecting the most likely option in Quinton Byfield.

With less of a consensus this season, and six additional teams selecting in front of them, the 2021 edition provided more options, and less prepared knowledge, than we saw a season ago. As the picks transpired though, things seemed to shape up in the Kings favor. With the way the first six picks went, the Kings knew that they would have the opportunity to select at least one of Brandt Clarke and William Eklund at number eight. With the latter selected by San Jose, at number seven, the choice element was removed and Clarke became the latest member of the Kings organization.

“As it unfolded, we were set to pick where we were at and very excited to get to what we needed to do,” Kings General Manager Rob Blake said of standing pat at number eight.

Clarke wasn’t necessarily surprised that the Kings were the team that eventually called his name on draft day. The newest member of the organization said that he talked with the Kings multiple times throughout the pre-draft process and felt that those conversations went rather well.

When he finally heard his name, selected to head West, Clarke was overjoyed at the realization.

“I talked with them a good amount of times and they really liked me,” Clarke said. “We did some video too, I broke down some plays for them, they wanted to see what I saw in situations, it was cool. I’m really happy that I got to talk to them that much and I was just really happy. They were great to me in the entire interview process and I’m ecstatic to be an LA King.”

So what are the Kings getting in Brandt Clarke? Hear it from the man himself.

“I feel like I am a very creative player, I’m patient with the puck,” Clarke said. “I feel like I make the right decision every single time and that’s something I pride myself on. I don’t want to be the last line of defense a lot, you can’t make mistakes or it winds up in the back of your net more often than not. I pride myself on getting pucks up quick, I pride myself on making good first passes, but I do have that creative asset. I can throw those fakes in to throw forwards off sometimes, or throw those fakes in to get shots through from the point. I feel like that’s just something I’m good at, like I said I’m poised and patient with the puck, I think those are some of my best attributes and something I hope to prove to LA Kings fans sometime soon.”

Clarke is known for his offensive abilities. His hockey sense, his decision-making, his passing abilities and his poise are all qualities that have been lauded, especially when applying them to the offensive zone.

Blake noted that adding a prospect like Clarke to the pool brings something that the Kings lacked. While the organization has several promising defensive prospects, and several who are right-shot blueliners both at the amateur and professional ranks, Clarke’s skillset is still unique. And when you can combine a best-player available approach with a “fits a need” approach, you’ve got a good-looking pick.

“I think as far as defensemen with the offensive ability and that’s the deception, the poise with the puck, the subtle plays he makes to bring a defender to him and either hit a forward in stride or get a puck through to the net a certain way,” Blake said of his newest prospect. “It’s something we’ve definitely needed and we’re glad to have added that.”

In his own words, Clarke isn’t a perfect player.

He understands that there are some areas of his game in which he’d really like to improve. He highlighted both strength and putting on additional weight, as well as becoming a more explosive skater as areas of emphasis as he looks to make the eventual transition to an NHL player.

“I feel like I need to just put on more weight, be stronger, be more explosive, that’s all stuff that I know I have to do,” Clarke said. “Situations when maybe it’s a 2-on-2, guys chip the puck around me, I can be more explosive with those first two steps, get to the puck in the corner and make a good breakout pass, instead of having the guy right on me. I feel like stuff like that can help with my well-rounded game.”

From speaking with Clarke, he wasn’t shy to give a non-cliched answer to the questions he was asked. His responses seemed genuine and he seemed to have a pretty good grasp of his own strengths and weaknesses, and wasn’t afraid to express either. As evidenced by this here quote graphic, Clarke’s determination and work ethic seem to be exactly where you want them to be.

Moving, Shaking, And More Maybe Some More Moving?
The trades around the NHL were interesting, for lack of a better word. We saw big names, big contracts and high draft picks exchange hands throughout the course of the day, though the Kings weren’t involved in any of the deals that took place.

“At different times you field calls and you put feelers out there and you see what can be available,” Blake said. “We’re trying to get into as many conversations as possible, and we also know we have certain needs we want to stay within and strengths and obviously make the team better with everything we’re doing.”

That’s not to say it was for lack of trying, however.

Blake noted that the Kings “were in a position where we were looking, trying to maybe get up a spot or two”, but eventually found themselves staying put at number eight. He added that any moves likely would have been upward, to ensure they got the player they wanted, rather than possibly trading down.

“Nothing really of interest in that aspect,” Blake said, when asked about calls received on the Kings pick. “We were looking at more of how the draft was unfolding, if there was any movement needed on that aspect.”

Looking ahead, Blake alluded to the options of making a move, whether it be on Day 2 of the draft or beyond.

Specifically eying tomorrow’s draft, during which the Kings currently own six draft selections, Blake noted that Mark Yannetti wants to be aggressive in getting the players he wants to, and said that the organization has the means to make a move to get those players, if necessary.

“There’s always that possibility,” he noted. “I know Mark, when we went over draft strategy, [wants to be] aggressive in getting the players that they have targeted in this draft. The necessary means to go and do it are within his grasp, yes.”

Looking at the grander picture, Blake commented for the first time publically on the acquisition of Viktor Arvidsson, noting the need to add a player to the NHL roster who will play in the Top 6. He added that the organization is still looking at adding in that area as well.

Whether those moves potentially happen tomorrow, or rather don’t occur until later in the summer, remains to be seen.

“We would like to [add more], and we’re going to explore all of the options as we have from the time that we could,” Blake said. “We zeroed in on Viktor early in that sequence, and talking with Nashville and understanding the deal that was in front of us. We thought it was important to add that type of player. Obviously with the work and the speed and the scoring ability, and the ability to play in the Top 6 on our team.”

Thanks to everyone who followed along with Day 1 coverage here on LAKI! We’ll have profiles of each player selected, as well as a Day 2 recap once we make our way through Round 2-7. It’s an early start tomorrow, see you then!