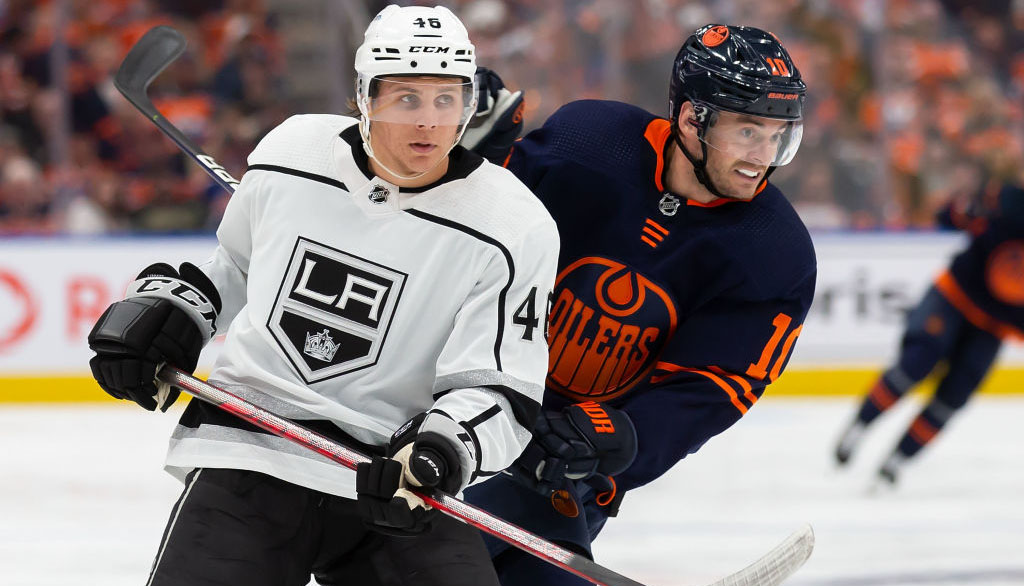 HEAD-TO-HEAD: With his second multi-point game of the series, forward Trevor Moore pushed his team-leading total to five points (2-3-5) from four games played. Phillip Danault added an assist, giving him four points (2-2-4) and a +5 rating through four games played. With two goals in Game 4, forward Carl Grundstrom tied himself for the team lead, with his three points trailing only Moore and Danault.

KINGS VITALS: The Kings’ mathematics abilities go no higher than the number one, in the words of their head coach. It’s win Game 5, nothing more, because at this point, what more can you win tonight in Edmonton besides Game 5?

It pretty much goes without saying at this stage in the postseason, but goaltender Jonathan Quick is once again tonight’s projected starter in Game 5. Quick stopped all 31 shots he faced in Game 4, his tenth career playoff shutout, as he became the 13th goaltender all-time to record double-dight postseason shutouts. Quick has the second-most amongst active goaltenders (Marc-Andre Fleury – 16) and broke a tie with Mike Richter for the most ever by an American-born goaltender.

The Kings held a short practice yesterday before flying out to Edmonton for Game 5. That skate was followed by an optional morning skate today, with a group of the team’s veteran players not on the ice, nothing out of line with what we’ve seen this season.

Coming off of the Game 4 victory, no lineup changes are necessarily expected, though you never know at this time of the year when it comes to players who are banged up, potential injuries and the like. The Kings have been forced into lineup changes for Games 1, 3 and 4 due to injuries, so we’ll see how, if at all, things progress.

With that in mind, Game 4 (and potentially Game 5) lineup listed below for reference –

OILERS VITALS: Despite losing Game 4, Edmonton still carries the second-best goal differential of the postseason into tonight’s action, with all teams now at four games played. The Oilers are +7 through four games, with their 17 goals scored ranking third thus far in the playoffs, despite being shutout in Game 4.

Similar to his veteran counterpart Jonathan Quick, Mike Smith is expected between the pipes again tonight for Game 5 in Edmonton. Smith has posted solid splits over the last three games specifically, allowing just five goals over the course of three games played. Overall, Smith has posted a .945 save percentage and a 2.27 goals-against average in the series, second best amongst goaltenders with multiple starts.

Per Daniel Nugent-Bowman of The Athletic, here’s how the Oilers aligned this morning –

Edmonton was forced to make one lineup change in advance of Game 4, with Derrick Brassard in for Derek Ryan, who was “a little dinged up”, per Nugent-Bowman. Per the embed above, Ryan appears likely to return to action tonight in Edmonton for Game 5, with Edmonton shuffling their forward lines from how they lined up on Sunday evening.

No Complacency
“We’d like to do that all over again, but I think that’s easier said than done. I think, when you’re in a playoff series, the only way you get to win it is you improve night after night. We obviously didn’t after Game 1, we didn’t after Game 2, I thought we did after Game 3, but that’s all in the past right now. Both teams are going to be aiming at improving, doing things better and coaches will be talking to their teams, motivating them about doing this better, or this harder. It comes down to the players doing it now. If it stays the way it is, there’s nine periods of hockey left, without overtimes. We can motivate, we can push all we want, but they have to get it done. Whichever team improves from night to night will probably end up winning.”

That was Todd McLellan’s opening quote from today’s press conference. He was asked about limiting the opportunities in the middle of the ice tonight, as the Kings did a better job of that in Game 4. He took the question into a larger picture thought.

The Kings were good, playing to their identity in Game 1, but didn’t up their level between Games 1 and 2, or between Games 2 and 3. McLellan felt that the Kings did do that, responding in the right way, between Games 3 and 4.

“I think any time, as an athlete, whether you lose by six or by one, you’re a little bit angry and you want to redeem yourself in the next game and for us, we had two in a row,” forward Blake Lizotte said this morning. “Coming into last game, I think the engagement was really high, emotions were running high for us for sure. We needed a bounce-back game.”

To advance from this point in the series on, the Kings will have to continue to raise their level. Seeing that zero on the scoreboard was great, but the Kings know at the same time they were far from perfect in getting to that point.

They relied on Jonathan Quick, perhaps too frequently, and the Kings know that there are areas to be better at here in Game 5.

“I don’t think that we’re sitting here thinking we played a perfect, defensive game last game,” forward Trevor Moore said this morning. “We know that Quickie made some amazing saves and we have to be a lot better in a lot of areas. Hopefully we will be.”

Bottom line, when Lizotte was on the ice in Game 4, the Kings had control of the puck. They created both volume and quality opportunities in those situations. No player was on the ice for more shot attempts for than Lizotte was, while just defenseman Olli Maatta was on the ice for more high-danger chances for. Lizotte, playing between the physical pair of Dustin Brown and Brendan Lemieux, helped the Kings to create and establish their own play and identity early in Game 4, setting the stage for a bounceback effort and a victory.

“I think just raising our compete level and it comes down to just skating really,” he said this morning. “I always tell myself just to skate and good things happen when you go to the net, when you skate. I think that was an emphasis right out of the gate [in Game 4].”

Lizotte has the power to drag others into game from an energy point of view and what he brings to the Kings is essential, in the words of his head coach.

“I think every team has what we call a conscience,” McLellan said. “Somebody who keeps everybody else honest on the team. It’s not always your top player or your top scorer, sometimes it’s that heart and soul guy that shows up, does it and does it all the time, who maybe wasn’t gifted the talent that some of the others were gifted. That’s the team’s conscious and he is ours. It’s essential that he plays the way he’s playing.”

More of the same is certainly what the Kings want to see from Lizotte in Game 5.

The Killers
The special teams edge in the series, as has been discussed, has certainly fallen with Edmonton. In Game 4, however, the Kings were able to play that area evenly, naturally not allowing a power-play goal in a shutout victory.

McLellan addressed one possible element of that today – faceoffs.

In Games 1-3, the Kings were 11-of-29 in the faceoff circle while on the penalty kill, amounting to just shy of 38 percent. In Game 4, however, the Kings won 7-of-8 shorthanded draws, helping to prevent an early zone setup for the Oilers.

“If you can win two faceoffs and clear the puck twice in killing that penalty, no matter who you’re playing against but especially against this team, it helps,” McLellan said this morning. “It really does. It allows you to get fresh people on the ice, it allows you to alleviate the pressure for a few seconds, it definitely helped.”

When you can cut the time you’re defending in-zone from what could be a full two minutes to even a minute and a half right off the bat, that’s a big swing. It’s especially big considering the potent nature of the Oilers in those situations.

On the in-zone defending though, the PK started with the goaltender, as Jonathan Quick was excellent in those situations, shutting the door when he was asked to. The Kings also felt they blocked shots at key moments, with everyone doing their job as assigned.

“I kind of goes game to game, situations change from game to game, but we were happy with the job we did [in Game 4],” defenseman Mikey Anderson said. “We’ve been struggling against them, so it was nice to have a game where the PK came up big when it needed to. Obviously, Quickie made some big saves and we had some big blocked shots from everyone. All around, I thought it was a complete effort from all parties.”

Looking ahead to tonight, it’s a clear focus from an LA standpoint. Success on the penalty kill, one, and limiting those situations, two.

Trevor Moore, the NHL’s leader in shorthanded goals during the regular season, kept it short and sweet when talking about the kill heading into tonight.

“Great power play over there, so our penalty kill is super important,” he said. “That’s going to be a big emphasis for us tonight in Game 5, as well as staying out of the box.”

Super important indeed, with a 3-2 series lead on the line!

Kings and Oilers, tonight at 7 PM on Bally Sports So-Cal for those of you watching locally and ESPN2 for those watching outside of the LA market. Big one, Insiders!