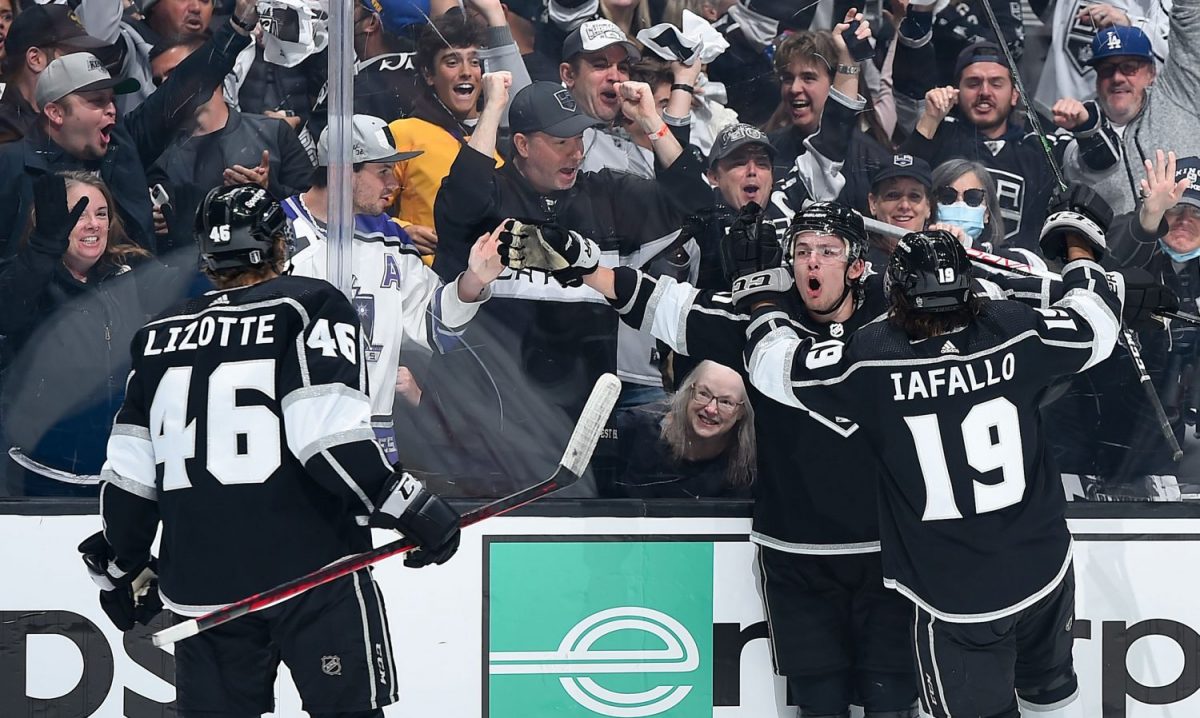 The differences between Games 3 and 4 were vast for the LA Kings.

The look going into the game certainly had its alterations, with the Kings making two lineup adjustments in terms of personnel. All three defensive pairings were impacted by the changes, as well as the Top 6 at the forward position.

The two players who entered the lineup were forward Carl Grundstrom and defenseman Troy Stecher, with that duo collecting three of the team’s four goals in the 4-0 victory, combining for five points in total.

The Kings held a short team practice today before departing for Edmonton, and one from my observation that did not have a ton to report from. We won’t hear from Head Coach Todd McLellan until tomorrow morning in Edmonton, but we caught up with the pairing of Grundstrom and Stecher after practice today, so sharing some selected quotes from those interviews below.

Great to hear from both players, after they made such important contributions to the lineup in Game 4.

Carl Grundstrom
Grundstrom skated in Games 1 and 2 on the third line, alongside Blake Lizotte and center and Dustin Brown on the right. That line was, for lack of a better term, quite low event in those two games, giving up just one goal together and falling right around 50 percent puck possession metrics. Not much created, but also not much conceded, and for a third line in the postseason, you’ll take that on certain nights.

Grundstrom’s role changed in Game 3, as an injury forced him out of action, shuffling the lines accordingly. Grundstrom said he personally had no doubts about his Game 4 availability, though he was officially a game-time decision after warmups. With the Kings opting to move the Top 6 around a bit, Grundstrom proved an effective complement to the inseparable duo of Danault and Moore. As has been the case all season, that line was adept at controlling possession in the offensive zone, with Grundstrom factoring into three of the four goals on the evening.

Speaking with Grundstrom earlier today, he focused on just trying to play his style of hockey, which is a North-South approach, with a blend of physicality, a nose for the net and a quick release all important elements to the way he plays the game. That approach worked in Game 4, with the Kings hopeful he can continue to contribute in such a way throughout the series.

On his goal last night and how the play developed
I don’t know either [how it went in]. I just tried to beat my defenseman to the net, I think he tripped me. I just fell in and pushed the puck over the goal line.

On hopping onto the Danault/Moore line for the first time in Game 4
It was a lot of fun and it was easy to play with those two. They’re two really good hockey players and I could just play my game. Really smart, makes good plays and strong on the puck. I agree with the other guys [who have said similar things], it’s easy to play with them.

On his consistent improvements throughout the season
I think I’ve been getting better especially on the defensive side of my game and also being stronger on the puck, making better plays. You learn as you play. I just try to play my game every game, sometimes you score and sometimes you don’t, that’s part of the game.

On if a specific veteran player talked with him at all before the playoffs started
Brownie had a talk with me before [Game 1], I played on the same line as him in the first two games. He talked a little bit about how the playoffs work and I thought that helped me a lot.

Troy Stecher
While Grundstrom had played in Games 1 and 2, last night’s Game 4 was the first postseason action for Troy Stecher as a member of the LA Kings. In fact, it was his first playoff experience in a full building of any kind. Stecher played 17 games with Vancouver during the 2020 Stanley Cup Playoffs, but those games came within the NHL bubble, set up during the COVID shortened season. Stecher scored a series game-winning goal in that postseason, so he’s no stranger to this stage, making him a great option for the Kings to have coming out of the press box.

Stecher talked about how engaged he’s been during practices over the last week or so, keeping himself ready both physically and mentally for when his number was called. Having played the bulk of his career on a pairing with Alex Edler only made the transition smoother, as the Kings opted to break up their shutdown pairing of Edler and Matt Roy, deploying Roy with Mikey Anderson and reuniting Edler and Stecher. The results were apparent, with the Kings distributing ice time fairly evenly on the backend, with Edler and Stecher lining up predominantly against the Draisaitl line at 5-on-5.

I enjoyed listening to Stecher’s approach and answers to a few of the questions he was asked today during media availability, touching on certain topics with honesty and wit that I think lent itself to quality answers. A few of those selects are available below –

On experience playoff hockey in a full-capacity building for the first time in the NHL
It was awesome. Going back to the couple of games I didn’t play, at least Game 3 at home, sitting up top, seeing the atmosphere, the pre-game show, you get so hyped up sitting up to that you just want to go. It was fun to have your name called and help your team win.

On scoring a goal of the importance that he was in Game 4
Individually, it feels great, obviously, I think anybody is lying when they say it’s not. Understanding the importance of where we were in that game, up 1-0 at home, trying to even the series, I know it was a lucky bounce off of Keith but if that doesn’t go in, it stays 1-0 and they could tie it on the next shot. It was a big moment in the game and I was just happy to be a part of it.

On not playing Games 1-3, and his approach to that time
Obviously not what you want as a hockey player, you want to play and help your team win, but everyone goes through it in their career, for the most part. The most important thing is being a good teammate, coming to the rink every day, working hard, pushing guys and having a good attitude. I wanted to play, but at the same time, I felt I was ready to go into the lineup when my name was called.

On defending as a group in Game 4 against Edmonton’s offensive depth
Yeah, I think with the coaching staff, as a player, you feel comfortable going against everybody. I think you have to give credit to Mikey and Royzie, they played against McDavid last night and did a really good job, played hard. I think everybody feels comfortable if they’re playing against that line, like you said, they have so much depth that it doesn’t really matter who is going out there, they can do the job, you just have to take pride in what you do.

The Kings are now in Edmonton, in advance of Game 5 tomorrow evening at Rogers Place. We’ll have morning skate in the AM tomorrow, with coverage to follow here on LAKI with a regular game-day preview. It’s Game 5 of an all-square playoff series. Exciting times, Insiders!