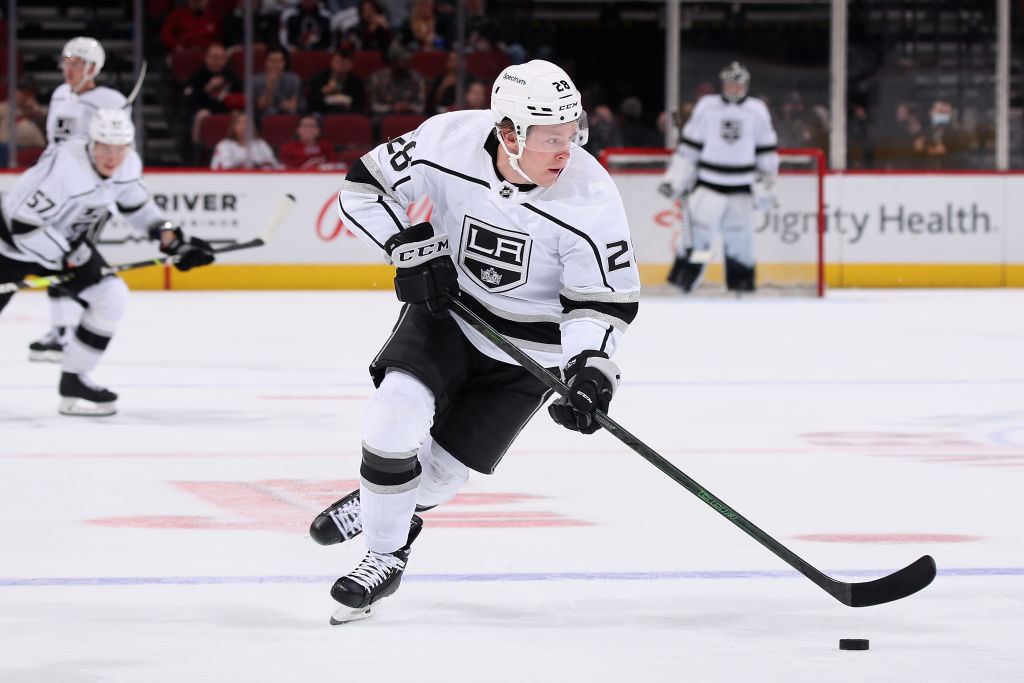 The Kings were back on the ice today for a full team skate, in advance of the upcoming trip to Edmonton and Vancouver.

The team is set to depart Southern California this afternoon, with games against Edmonton and Vancouver awaiting on Sunday and Monday respectively. Awaiting them will be the division’s highest-scoring team on night one, followed by what will be a rested Vancouver team coming off a pair of victories. Two difficult challenges for the Kings in the coming days.

On the roster moves front, joining that trip will be forwards Jaret Anderson-Dolan and TJ Tynan, who were recalled by the team earlier today.

– Jack Jablonski recently profiled Anderson-Dolan’s early-season production and play HERE. The 22-year-old forward has 13 points (5-8-13) from 16 games played here in the early goings with Ontario, playing consistently as a center in the team’s middle six. Anderson-Dolan skated in 34 games with the Kings last season and tallied 11 points (7-4-11), playing predominantly in the team’s bottom six. If he gets into a game this weekend, it will mark his fourth consecutive season with an NHL appearance.

“The details in the NHL, every game, they’re so important, especially on the defensive side of the game,” Anderson-Dolan said. “I think I’ve always been solid defensively, but towards the end of the year my game wasn’t where it needed to be. I wasn’t making the reads I typically make and I was starting to overthink things. That’s now my focus in Ontario, to read and react and not overthink plays. I also need to continue to develop the overall offensive side of my game, I was a little bit inconsistent for the Kings,” he added. “I had a good start to the season last year, but towards the end I wasn’t producing as much as I needed to help the team win. That’s something you can always be working on, shooting pucks and working on your offensive skills.”

– Tynan has also been recalled from the AHL’s Ontario Reign and appears set to join the Kings for the second time this season, though he did not make an NHL appearance on his first recall. All Tynan, the reigning AHL MVP, has done this season with Ontario is produce. The shifty forward has skated in 12 AHL games this season and he has points in 10 of them. Tynan has four assists from four games since he was reassigned to Ontario in late-November

“He’s the type of player that’s not content to just be in the AHL. He’s going to push to be his best and I think the defining characteristic of TJ is that he just makes everybody around him better. Whether that’s him making a slip pass to his linemates or buzzing through the neutral zone or the offensive zone always demanding the puck. But also, it’s his infectious work ethic, his tenacity, his desire to win and be a leader, those are the things that are ultimately going to rub off on guys.”

– Also on the ice today were forwards Andreas Athansaiou and Quinton Byfield, who both were with the group during yesterday’s optional skate. Athanasiou returned to the group yesterday for the first time since he entered COVID Protocol, while Byfield skated in a regular-contact jersey for the second straight day. At this time, Athanasiou has not been activated from protocol and Byfield remains on injured reserve, so their future is still to be determined.

– Forward Blake Lizotte did not skate today and was added to the NHL’s COVID Protocol as of this morning. Lizotte is the fifth Kings forward to miss time this season due to COVID Protocol. We’ll provide further updates as they come, but at this time, no further information, as is typically the case here, is available.

– Defenseman Kale Clague was not on the ice with the Kings today. Clague was placed on waivers yesterday morning, and today was claimed on waivers by the Montreal Canadiens. Clague collected five assists from 11 games played with the Kings, as he stepped into the lineup with Drew Doughty and Sean Walker sidelined. The 23-year-old defenseman earned himself some time on the power play and showed improvement in other areas, but with Doughty now back, the status of several veteran defenseman and the recent emergence of Sean Durzi, it created a numbers game on the backend.

Wishing Clague the best in Montreal, which recently ruled out defenseman Jeff Petry with an upper-body injury.

Here’s how the Kings took line rushes, though consider that Anderson-Dolan did not skate –

More to follow tomorrow on potential alignment for tomorrow evening’s game versus the Oilers.

Additionally, hear from Kings center Phillip Danault, who joined NHL Now yesterday afternoon. The Quebec-born pivot discussed his fit with the Kings thus far, with his place on an energetic and productive second line, among other topics.