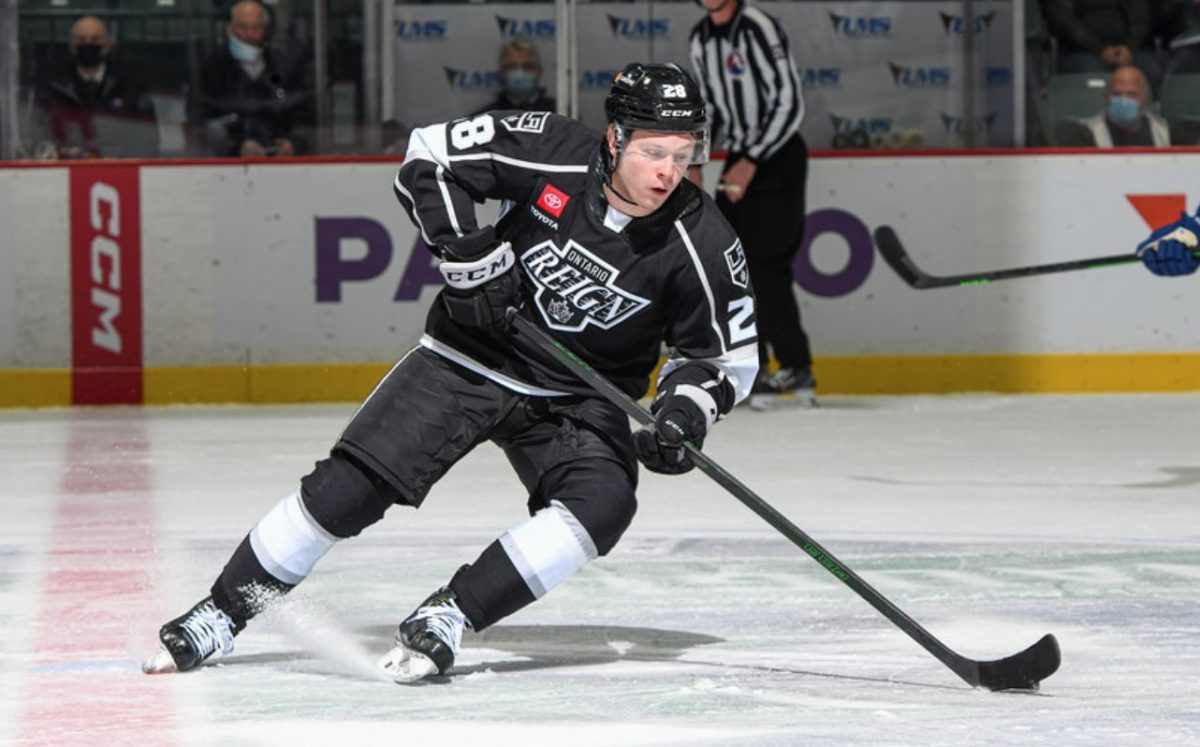 Off to a 10-2-0-1 start, the Ontario Reign have found production up and down their lineup in the early goings. Among the many impressive performances during this young AHL season has been the play of center Jaret Anderson-Dolan. Currently fourth on the team in points with five goals and seven assists from 13 games played, Anderson-Dolan is making the most of his time in the AHL.

After he appeared in 34 games, and totaled 11 points (7-4-11), for the Kings last season, Anderson-Dolan was assigned to the AHL’s Ontario Reign during training camp this fall. That left the player with two choices: Sulk, because he didn’t make the Kings roster or take advantage of the opportunity to showcase his continued growth as a prospect in the organization.

To anyone who has met Anderson-Dolan, there wasn’t even a choice to make. To no surprise, the mature-beyond-his-years center has chosen the latter. With a phenomenal awareness of his own game, Anderson-Dolan painted a clear picture of NHL hockey and of his performance last season.

“The details in the NHL, every game, they’re so important, especially on the defensive side of the game,” Anderson-Dolan said. “I think I’ve always been solid defensively, but towards the end of the year my game wasn’t where it needed to be. I wasn’t making the reads I typically make and I was starting to overthink things. That’s now my focus in Ontario, to read and react and not overthink plays.”

To see a younger player have some growing pains defensively is no surprise. Against the best players in the world, the NHL presents a different type of challenge, one that Anderson-Dolan met for much of the season.

He also discussed his offensive contributions, which were plentiful before a shoulder injury cost him some game time early in the season, but dried up a bit in the second half.

“I also need to continue to develop the overall offensive side of my game, I was a little bit inconsistent for the Kings,” he added. “I had a good start to the season last year, but towards the end I wasn’t producing as much as I needed to help the team win. That’s something you can always be working on, shooting pucks and working on your offensive skills.”

Having had the offseason to reflect and focus on those intricate details and the lessons he experienced with the Kings last season, Anderson-Dolan spent much of his time this summer sharpening his tools and getting his body in shape to handle the world’s best players every night.

That entailed not only getting stronger, but also an updated focus on his conditioning levels. Going from playing over 20 minutes on some nights with the Reign during the 2019-20 campaign to 13 and a half minutes with the Kings last season takes an adjustment. As does the reverse to playing all situations here in the AHL. Different assignments, with Anderson-Dolan doing his best to prepare for both.

“The main focus for me this offseason was to get in better physical shape and get stronger,” he said. “I wanted to get my conditioning back up. I wasn’t logging the same number of minutes up with the Kings that I did in the years prior with Ontario and in juniors. Going into every summer, you prepare for that fitness test, training camp and the conditioning at the forefront.”

Jaret Anderson-Dolan made it 5-0 with this 5-on-3 power play goal in the 2nd! pic.twitter.com/SxPwwCCsQI

Now finding himself on the scoresheet consistently, Anderson-Dolan credits his uptick in production to his time with the Kings and his teammates.

“I think the work that I put in the offseason really helped and my confidence is up too,” he said. “Once you get some games in the NHL under your belt and score some goals, you realize that any goalie is beatable. You learn different ways to scoring goals and that comes with experience and watching other guys.”

One such individual is Martin Frk, whose name is at the top of the AHL leaderboards this season in some offensive categories. With Frk, he naturally has the benefit of having the “hardest shot in hockey”, as the North American record holder in the hardest shot competition from the 2020 AHL All-Star Classic.

While Anderson-Dolan doesn’t have that shot, he’s been able to pick up on certain areas that Frk goes to to score his goals. That element of his game can be replecated.

“I like to watch guys like Martin Frk a lot because he’s a great goal scorer with a great shot, but for me, it’s more about where he goes to find those [offensive] opportunities,” Anderson-Dolan explained. “Obviously, our team success and the guys we have on the Reign is pretty fun. Individual success doesn’t happen without your teammates and I’ve been pretty lucky to play with some pretty amazing players this year.”

The maturation and selflessness of Anderson-Dolan on and off the ice has shown this season in more ways than one. Being that Anderson-Dolan is one of just five skaters on the Reign with more than 40 games of NHL experience, the Calgary, Alberta native has blossomed into a leader in the locker room and in games.

“It keeps you accountable being a leader because you expect the most of the leaders and it’s their job to lead the way,” he said. “I try to approach it that and to be better than you were the day before. In my experience all great leaders do that.”

At just 22-years-old, Anderson-Dolan is well on his way to becoming that “culture” type of glue guy that the Kings organization has been drafting over the past few years. Whether it be in Ontario or Los Angeles, Anderson-Dolan’s commitment to being the best player and best leader he can be isn’t going anywhere, giving Kings and Reign fans something to look forward to when the games begin, and the puck drops.

There’s no question that Anderson-Dolan, along with every prospect and player on the Reign, has his sights set on getting that call-up to the LA Kings. Having had that sweet taste of life as an NHLer last season, Anderson-Dolan is undoubtedly doing everything he can to earn that promotion yet again. But don’t let that fool you, that Reign jersey he is putting on right now is priority number one.

“Once you get a taste of being in the NHL and playing in the best league in the world against and with the best players in the world like Anze Kopitar and Drew Doughty, you want to be there every night,” he said “I’m definitely motivated to get back there, but my first focus is to help our team win here in Ontario and then second, get back to the NHL with the Kings. I want to be up there and help the team win.”

You can catch Jaret Anderson-Dolan and the rest of the Ontario Reign tonight as they host the Stockton Heat at 7:00 PM at Toyota Arena. The game will be streamed live on AHLTV. 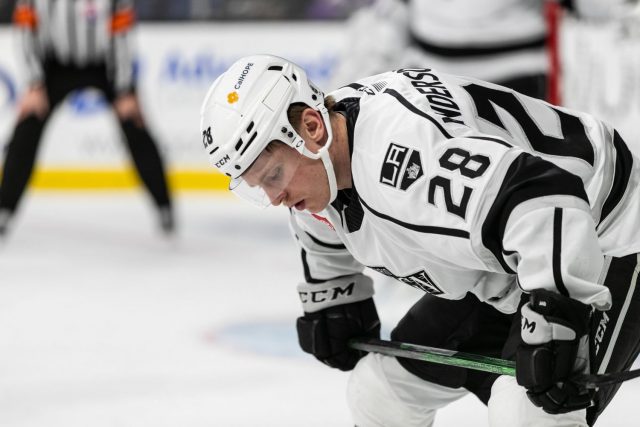