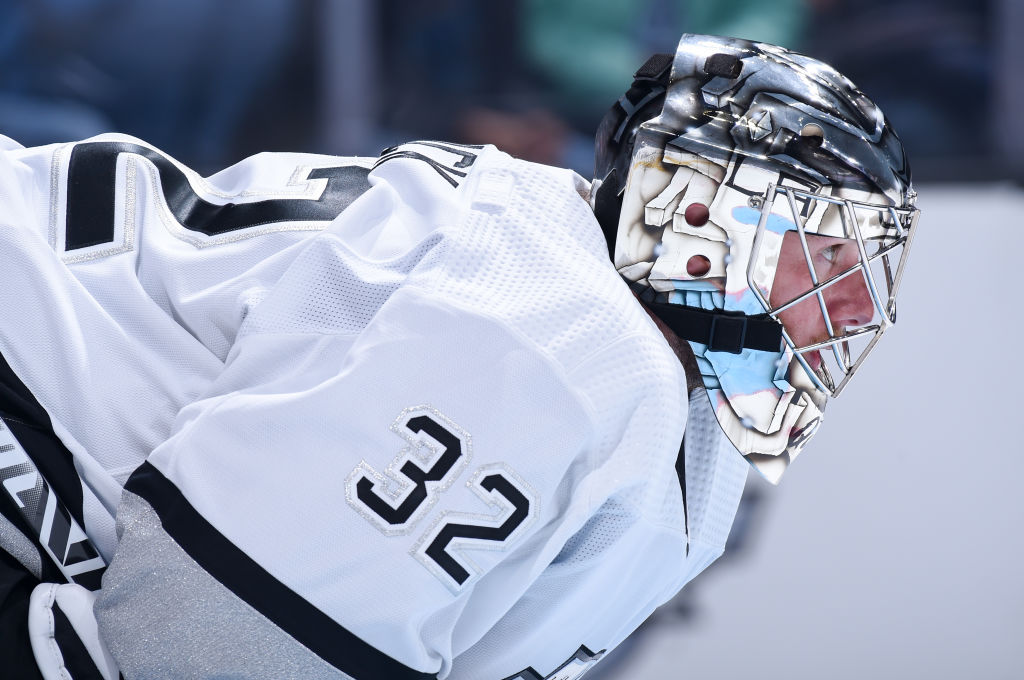 Defenseman Sean Durzi was with the group, after he was the first-star of yesterday’s game for the Ontario Reign. Durzi was recalled and served as a healthy scratch over the weekend, then re-assigned to Ontario and had three points in yesterday’s Reign victory and was promptly recalled again today in advance of practice.

Durzi skated on a pairing with Olli Maatta, as well as on the team’s second power-play unit, with Todd McLellan indicating there’s a “real good chance” of seeing Durzi make his NHL debut tomorrow evening against the Maple Leafs.

“There’s a real good chance that Sean will play,” McLellan said. “He’s been a real good student of the game since he’s been with the organization, he’s put his time in and done real good things as far as development goes at the American League level, he’s off to a good start there. He’s had some good practices with us and there’s a good chance he’ll be in the lineup tomorrow.”

Durzi will likely see time on that second power-play unit if he does in fact check in tomorrow. The former Maple Leafs draft pick quarterbacked that unit during today’s practice, alongside the quartet of Phillip Danault, Dustin Brown, Alex Iafallo and Andreas Athanasiou.

Durzi’s strengths play to moving the puck and contributing in offensive situations. I mean, the man was tied for the AHL lead in goals by a defenseman and ranked second in overall defensive scoring. That tells you what you need to know about his strengths and style of play. Assuming he does factor in tomorrow evening, Durzi will feature on the man advantage in those situations.

“If Sean plays, he’s likely to get some time on the power play, it’s what he does well,” McLellan added. “It makes no sense to bring him up and not give him that opportunity. He may not be the number-one unit guy, but he may see that secondary time and if things go well, we can always flip it. That’s what his forte is, puck movement, good vision, creating with his shot, especially with a man down. If we’re bringing him up, we might as well use him in that situation.”

Additionally, line rushes showed that forward Lias Andersson centered the line with Trevor Moore and Dustin Brown, with Rasmus Kupari and Carl Grundstrom rotating in with the bottom six. Still early here, but those two changes are ones that we’ll be on the lookout for during morning skate tomorrow.

The Difference In One-Goal Results
We discussed this yesterday – The LA Kings have played a lot of one-goal hockey games. If you look at the flow of the games and classify certain situations as more than just the end result, it’s the more often than not that a game is, or basically is, a one-goal game. Todd McLellan estimated that, across the NHL, 60 percent of the games are either actual one-goal games, or essentially one-goal games, with an empty-net goal or something of the like altering the final score. That’s the league today, tighter from top to bottom, and that’s the kind of hockey the Kings are playing right now.

“I think that’s the league – At the end of the year, you’re going to look at the 1200 games that were played, or whatever it is, and I bet you 60 – 65 percent are going to be one-goal games,” McLellan said. “It’s not always a one-goal game when it’s 3-2, it’s 4-2 with an empty-netter, whatever it might be situationally. That happens two-thirds of the time and it’s happening to us quite a bit, but we’re comfortable in those games.”

McLellan went on to discuss different types of one-goal situations, with the team’s one-goal defeats against Arizona and Carolina respectively being very different games. The Kings have certainly played a lot more of the former, the tight-checking, low-scoring games, but also lost by just a goal against Carolina in a nine-goal spectacle.

Either way, close games are close games, with a variety of factors able to swing them one way or the other.

“We’re usually able to check our way to a chance to win at least, I think they favor us more than being in a 5-4 shootout with Carolina,” McLellan added. “We’re not uncomfortable playing in those, but the difference is sometimes, a mistake here, a mistake there, a poor line change, a penalty that maybe you shouldn’t have taken, a save, an opportunity at the other end of the rink you don’t quite bear down on, we’ve seen that a few times. You can’t pinpoint one moment or one key to swing a one-goal game, one way or the other.”

Speaking with Jonathan Quick and Phillip Danault, they each had their own rationale behind what separates a one-goal win from a one-goal loss. Quick spoke about those small plays, or small bounces, that can flip a game one way or the other by a single goal. Danault discussed the thought of being just that much more aggressive offensively, or tight defensively, to swing the tide in the Kings favor.

Quick – I think we talked about it a couple weeks ago, we were finding ways to win at that moment, whereas earlier in the year we were finding ways to lose, and now it’s kind of going back the other way. There hasn’t been a big difference in our play, that I’ve noticed, whether we’ve won or lost, we’re playing good hockey games for the most part. We deserve to be in those games and a lot of nights, deserve to win those games. That’s how the league shakes out sometimes. Sometimes, you find ways to win, you get that bounce, you get a big save or a big goal, and sometimes the guy at the other end makes a big save or the other team gets a big goal at the right time. It turns out to be a lot of situational stuff, and what you’re trying to do as a team is give yourself as best an opportunity as possible and hope you catch some puck luck or someone makes a big play.

Danault – I don’t think we’ve played bad, obviously [just] scoring last game, but it’s little details and we’re making some little mistakes that are winding up in the back of our net. We’ve got to tighten it up a little bit defensively and be stronger, all make strong plays out of our zone, and stay aggressive too. I think we’ve been a little bit too passive over the last couple of games, we didn’t generate enough chances, so staying aggressive, from the forwards to the d-men too.

Leading From The Net
Danault also touched on the less-discussed side of his goaltender today, and that is Quick’s leadership abilities.

“He’s an awesome leader,” Danault said. “You can tell why he’s been in the league for a long time and you can tell why he’s won two cups, too. He’s a great veteran for us and I’m happy to know that guy, he’s very good off the ice with me, and good on the ice. He competes every day here, he’s very athletic as well, he’s a good leader for us.”

It’s rarely the first side of a goaltender you talk about. Goaltenders don’t wear letters at the NHL level, goaltenders don’t talk to the officials after a close call and goaltenders typically aren’t lauded for their leadership abilities, as prevalent as they might be. That really shouldn’t be the case though.

As McLellan discussed, goaltenders play every minute of the game, upping their impact in all situations. When you have a goaltender with Quick’s status and presence in the room, his importance is that much greater, considering his influence on his teammates. Having a player like Quick to help communicate the message has been critical for the coaching staff.

“[It’s] the way they carry themselves in the locker room, the way they react to situations, the way they behave around their teammates, are they buying or selling what the coaches are trying to apply,” McLellan said. “That’s all-important, and these Hall of Fame goaltenders have that. They have a way of unifying a group and bringing the message all-together. Quickie is that guy.”

For his part, Quick spoke about the natural need for leadership that comes with the goaltending position. For the veteran, it’s not about being the “rah-rah” guy, it’s not even necessarily about being a vocal guy at all, but through his compete and his work-ethic, he knows his position is naturally designed to lead, with others relying upon the goaltenders so much.

“I think you have to have some of those qualities in order to be a goalie in this league,” Quick said. “Players rely on you on a daily basis. Whether you’re playing 70 games or 30 games, 30 games is still a lot, that can make or break your playoff chances. You have to be on when you’re in. I think, just by what the position entails, you have to have some of that leadership in you. That’s not necessarily saying stuff in the locker room, or pumping guys up or anything like that, it’s how you play and coming in and competing.”

Hear some more of the interview with Quick below –

The Kings are set to skate tomorrow morning, in advance of their final game of the season against Toronto. Plenty on that game to follow in the AM!