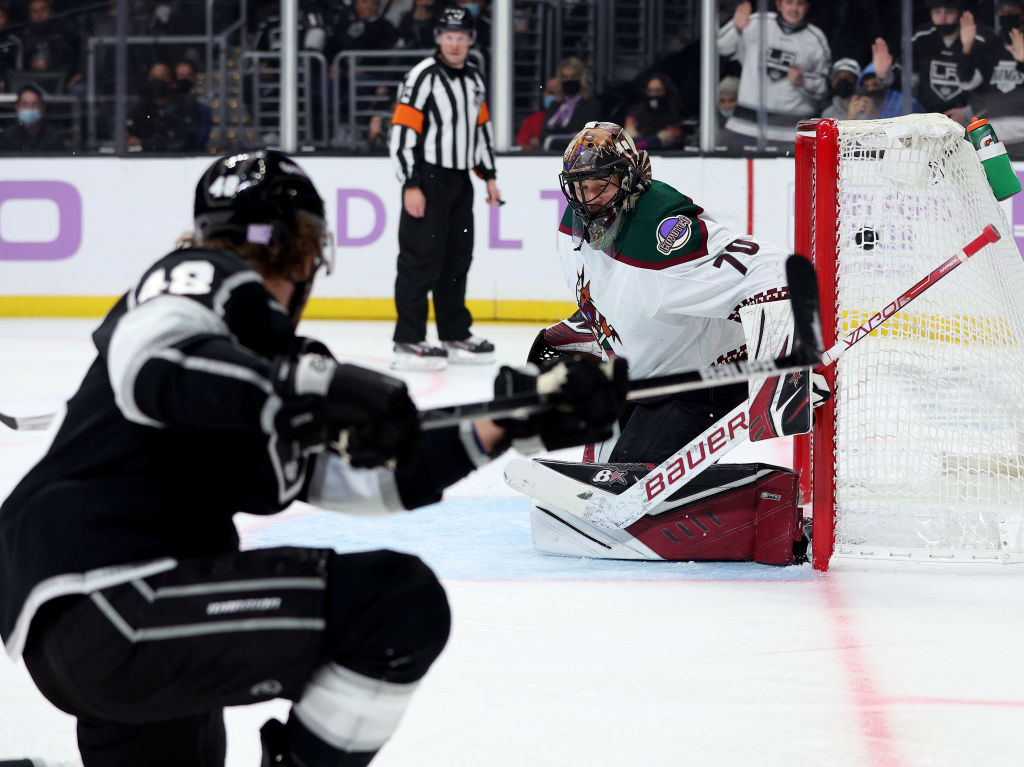 If you take out opening night, which had staggering totals, the Kings have created more shot attempts over that four-game stretch than any other game this season. So, shot quantity is there.

Over the last three games, the Kings have posted double-digit high-danger chances for, the first time they’ve done that in three straight games. Their scoring chances, like shot attempts, are greater than any other four-game span so far this season. So, shot quality is there too.

If expected goals is your thing, then the Kings have won that battle in each of their last four games, when looking at all situations.

Why then are the LA Kings on a four-game losing streak, with an 0-2-2 record that the underlying metrics show they should be far ahead of?

Todd McLellan has phrased it a few different ways over the four games, but he put it pretty bluntly after yesterday’s 2-1 overtime defeat against Arizona.

“No finish,” he said, referring to the loss against the Coyotes. “No finish on our behalf. 2-on-1’s, breakaways, staring at the goaltender, open nets, opportunities were there but no finish.”

The word McLellan used after the 2-0 loss against Washington was “polish”, when he talked about the chances that the team created, both in quality and quantity, but lamented the polish in putting one of them home. In all four games, the Kings have essentially lost by a goal, if you take away the empty netter against Washington. The game against Carolina obviously did not lack offense, with the Kings netting four times in a 5-4 defeat, but in the other three, all it would have taken was one goal to swing the game.

McLellan has talked about things the Kings are working on to improve in those areas. Practices have included work in “outnumbered” situations, as well as net-front drills that work on second and third opportunities from an offensive perspective. In-game situations are different though. On a 2-on-1, on a breakaway, on an outnumbered situation in a smaller area, it’s about in-the-moment decision making and execution. In that area, the Kings came up a goal short.

The other element to that is the power play.

The figured referenced above refer only to 5-on-5, where the Kings have been the better team by the number in each of their last four games. The man advantage though has not scored a goal in that span and is actually minus one in total after allowing a shorthanded goal against Winnipeg.

When speaking with defenseman Matt Roy after yesterday’s game, he felt the power play was the difference between a one-goal win and a one-goal loss.

“I think our power play needed to get one tonight, we obviously didn’t,” he said. “It’s nice to take it around, have a good unit out there, but at the end of the day we need to score. If we’re not scoring then we’re not doing our job.”

McLellan switched up the personnel yesterday, moving Roy and Arthur Kaliyev to the top unit, with Kale Clague and Alex Iafallo moving to the second unit. There was a sequence early in the third period yesterday where that top unit snapped the puck around better than they have in some time, holding possession for a full two minutes in the offensive zone. The Kings had nine shot attempts on that power play alone, and a goal there could have iced the game, but despite a great-looking sequence, the puck stayed out.

It’s hard to blame Player A or Player B, it’s hard to say it’s just Situation X or Situation Y that is failing the Kings right now. The Kings are just playing as many close games as anyone, and when the margin for error is that slim, sometimes it goes your way and sometimes it doesn’t.

Case in point – No team in the NHL has played more one-goal games than the LA Kings. 11 of the team’s 18 games this season have been one-goal games. That 11 doesn’t count an empty-net goal against Washington, a late-goal for versus Ottawa, or a game in St. Louis that was 1-0 into the final five minutes. 14 of the 18 games the Kings have played were within a goal with less than five minutes to play in regulation. That’s staggering.

During the seven-game winning streak, the Kings won by a goal over Buffalo, St. Louis, New Jersey and Montreal. In each of those games, they just seemed to get that timely goal when they needed it, with all four lines finding the back of that net at different times. During the four games since, the Kings have just seven total goals, with four of them coming from the pair of Brendan Lemieux and Blake Lizotte. Turning chances into goals, overall performances into victories, as the Kings were doing earlier this season, will get things back to where they need to be.

The road ahead contains a difficult ending to the team’s current seven-game homestand. The teams that remain are Toronto and Ottawa, both seeking to avoid a season sweep at the hands of the Kings, followed by the Anaheim Ducks, who recently had an eight-game winning streak snapped and lastly, the stingy Calgary Flames. Calgary has shutout their opponent in seven of their first 19 games, a modern-day NHL record, meaning that goals will once again be at a premium when Darryl Sutter and the Flames come to town to conclude the trip.

The last time we wrote one of these after four-consecutive losses, the feeling was drastically different. The Kings had just lost a pair of defensemen to injuries, the feeling around the team was substantially lower than it is right now. This isn’t a time to panic, just because a few results went the other way against the numbers. It’s a time to regroup for the day and continue to do the things that have been done well……just with a little bit more finish.