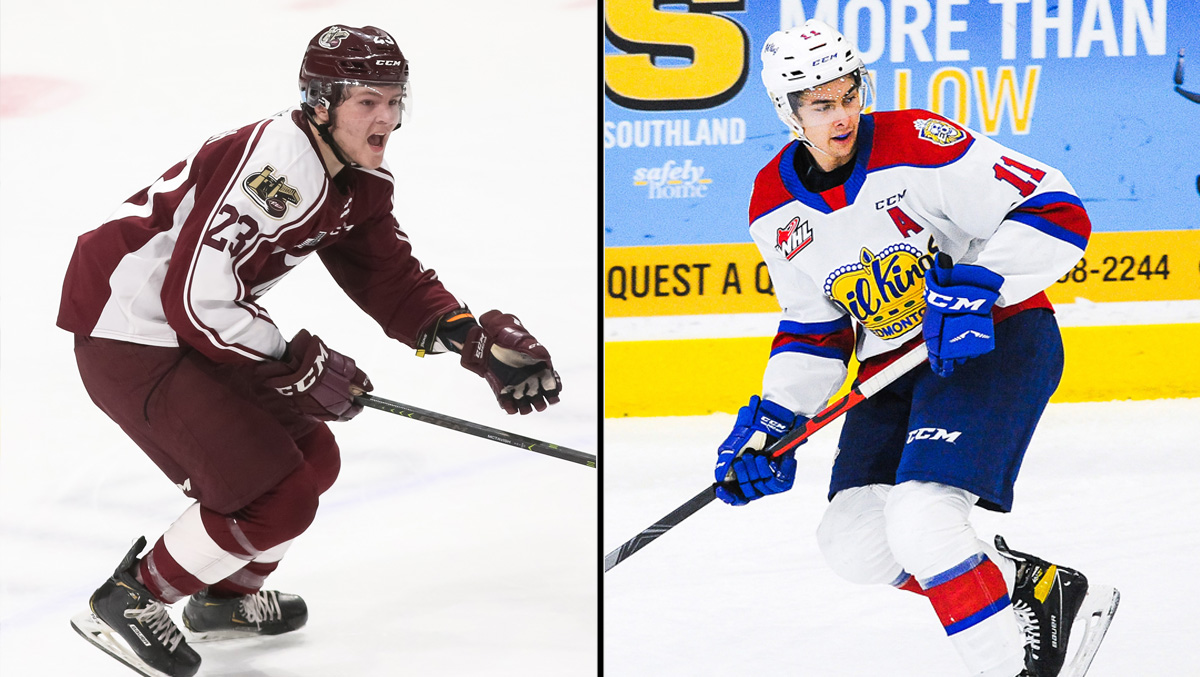 With the NHL Draft coming up quickly, on July 23-24, LAKI takes a deep dive into the possible options for the Kings at their No. 8 draft position in the first round.

Dylan Guenther is the definition of elusive. In the offensive zone he is slippery with the puck and hard to defend without the puck. In transition, Guenther is even more lethal. Offensively, Guenther has the complete package. With the ability to score in any facet, find time, open space and open teammates for opportunities, Guenther is a good-looking offensive prospect.

Raising his stock even more, Guenther is also good in the defensive zone. With a good understanding on the defensive side of the game, Guenther is positionally sound and has the hockey IQ to read plays and sniff out passes in his area. Although he does need to put on muscle and weight, he still has a mentality of not being afraid to go into the corners and battle.

On if he’s stronger creating offense with or without in offensive zone
I think both. I think being a guy who creates offense is a big strength in my game. I think it’s important to do both. Whether it’s getting a shot on net or getting open for a pass, they’re both important. When I have the puck on my stick, I’m a threat to shoot and score, but I can also pass and make plays. That’s a big part of my game.

On his hockey IQ
I think hockey IQ and scoring go hand-in-hand. I feel like I’m able to time the play and read them ahead of time, so that I know the position I need to be in to get my shot off or get into a scoring area. Being able to read what’s going to happen and where your teammates are going to be at really helps.

On how he handled not being able to play hockey during COVID-19 shutdowns
I was sitting at home for a long period of time where a lot of other countries and players continued to get better and play a normal season. I was unable to do that, so I had to find ways to continue to get better and work on my game. Those were definitely tough times, but I had to continue to push myself and I think I did a good job of that.

Bob McKenzie, TSN
Dylan Guenther [is a] goal-scoring shooter who is also quite adept at making plays and playing ultra-competitively in the hard areas around the net.

Sam Cosentino, Sportsnet
[Guenther] thinks the game at a high level and is constantly utilizing all resources to improve his game. While offense is what jumps out, the proficiency in his game extends the length of the ice.

McKeen’s Hockey
Guenther is an off-puck specialist, constantly supporting his teammates through clever pathing all over the ice. This style of play projects very well towards the NHL and provides different developmental paths for whatever team that drafts him to mold him in.

Guenther is in line with the type of player that the Kings have started to draft since the “retool” of the team. He’s agile, fast and versatile. Expected to go in the vacinity the eighth pick, Guenther would be an enticing pick for the Kings. Drafting Guenther would add to the high-end talent up front that Kings are already excited about and bring plenty of flexibility to the prospect pool.

Summary
Mason McTavish was one of many players to be severely impacted on the ice by the COVID-19 pandemic. In his first year in the OHL in 2019-20 season, McTavish racked up 42 points (29-13=42) in 57 games with the Peterborough Pete’s, the second-highest point total among OHL rookies. Ready to come back and make a splash in his sophomore season, McTavish didn’t get that chance. With OHL season cancelled after several attempts to get it underway, McTavish had to find elsewhere to play.

Born in Zurich, Switzerland, McTavish went back to his birth country and played for EHC Olten, a team in the second-tier Swiss league. Though McTavish only played in 13 games in Switzerland, the strong and talented center recorded 9 goals and 11 points.

McTavish has tremendous offensive skills and is a versatile player who can impact the game on and off the scoresheet. At 6’2” and 207 pounds, McTavish can play both big and small if needful. His size and skill provide a unique combination that not many in this draft have. And lastly, as one of the premium goal-scorers in this year’s draft, McTavish has a shot that has goalies on edge from everywhere in the offensive zone. With more of a shoot-first mindset, McTavish has the ability to be a leading goal scorer on an NHL team one day.

On being compared to Ryan Getzlaf
I really admire the way Getzlaf plays. He’s a big center that gets around and obviously has high-end skill. I try to play like him and compare myself to him.

Craig Button, TSN
Mason is a really competitive player, he’s got a real fire in his game. He’s a good goalscorer, he can shoot the puck and really get goaltenders back on their heels from 35, 40 feet and that in and of itself is a good skill, plus he’s a really good two-way player.

Steve Kourianos, The Draft Analyst
Violence and aggression are just two of several commonplaces in your typical McTavish shift, but he’s also a highly-skilled playmaker and shooter who causes all sorts of matchup problems for defenses.

Jacob Barker, Dobber Prospects
His toolbox is highlighted by a bomb of a shot, which he can get off quickly and accurately from anywhere in various scenarios. However, the most impressive part of his game is his ability to put himself in high danger areas in the offensive zone.

The physical presence that McTavish presents is a standout trait when you’re looking at potential difference-makers, if the draft prospect reaches his projected potential. With the skill of a high-end point producer and the size of a power forward, it’d be hard to find an NHL team not interested in that build. As for that eighth-overall pick, McTavish is projected to go around the Kings first-round selection or just after.

If McTavish were to be picked by the Kings, his addition into the Kings prospect pool would not necessarily be filling any “needs”, but that does not mean it’d be a bad pick. McTavish has a very unique skillset for his size and there are debatably no other players like him in the top-20 picks. If the Kings indeed value McTavish’s assets as “can’t miss,” then McTavish at eight has the potential for the Kings to continue to build a big, heavy and hard to play against roster down the middle like we saw back in the Stanley Cup runs.

For more draft-eligible prospect content, you can find that on All The Kings Men as I am joined by draft experts to break down the 2021 Draft class in segmented groups.

By Zach Dooley
99 Comments
Looking to the Future

By Zach Dooley
310 Comments
Looking to the Future

The LA Kings have selected forward Samuel Helenius with the 59th overall pick in the 2021 NHL Draft! The Kings acquired