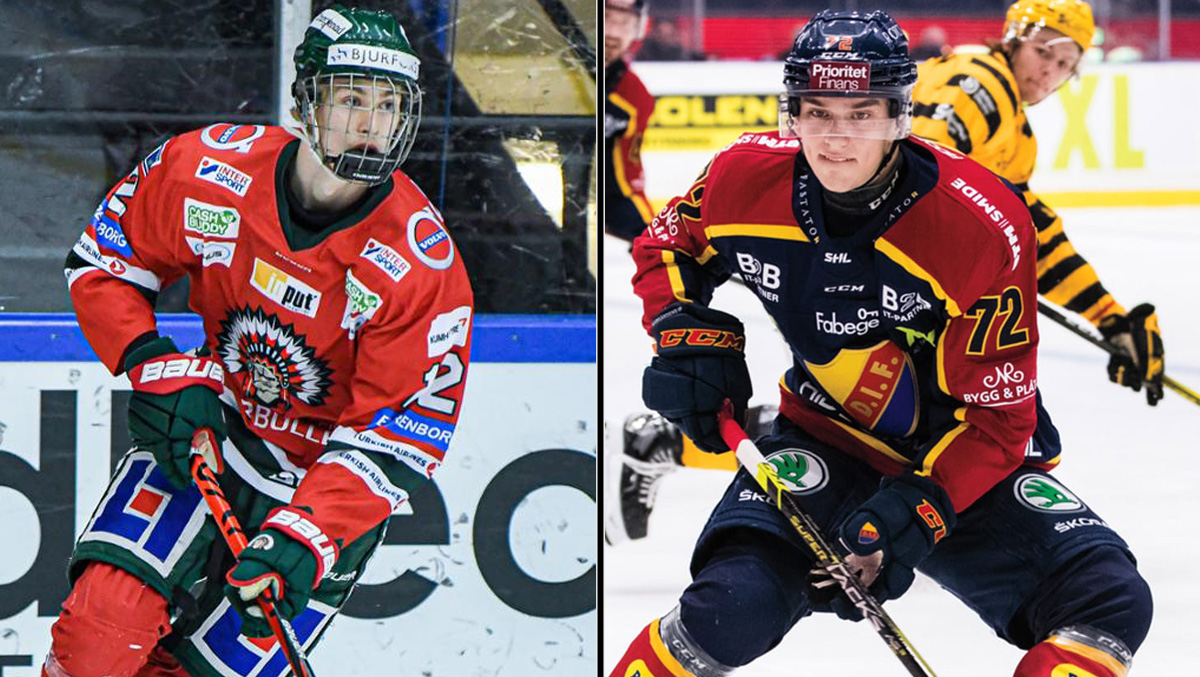 With the NHL Draft coming up quickly, on July 23-24, LAKI takes a deep dive into the possible options for the Kings at their No. 8 draft position in the first round.

Summary
Simon Edvinsson played double-digit games in three leagues this season, including the top two divisions in Sweden. The young defenseman played with Frolunda HC at both the senior and U-20 levels, including 10 regular-season games in the Swedish top flight, as well as with Vasteras IK in the second division.

The consensus on Edvinsson is that teams are drafting for the tools and looking to develop the toolbox. In terms of raw talents, many have lauded the abilities that Edvinsson has, with his combination of size and mobility an incredibly attractive package for many who are looking and evaluating. At six feet, four inches tall, Edvinsson can do things that many others at his size can’t, in terms of moving the puck, breaking out of his zone, skating and offensive ability. The physical tools make Edvinsson a high-upside player, potentially for a team patient enough to let him grow into those abilities.

Edvinsson on his plans for next season
The plan right now is to play for Frolunda and play for them for the whole season. I don’t know what the team that will draft me will say, so I’m pretty open. I want to play in Frolunda right now, and that’s what I’m going to [plan] to do, but we will see.

On his own game, and his plans to come to North America
I try to be as good as possible at both ends [of the ice]. I try to be really good on both defense and offense, I try to build up as much as I can, before I go over, and when I feel ready, I will come over to play [in North America].

On his and Sweden’s performance at the U-18 Worlds
I feel like the team, and me, didn’t play as well as we can in the group. Especially for me, it was different, playing on the smaller rink and it was for the whole team. To play on the smaller rink, how to play over there, is very different. When we started to play, in the playoffs, we really found each other and used the rink to our systems. It went better at the playoffs, but the group was, not bad, but not as good as we can play.

Craig Button, TSN
Edvinsson is an outstanding skater. He has the brains and competitive spirit necessary to be a top-pair, big-minutes defenseman at the pro level.

Chris Peters, Hockey Sense
The thing about Edvinsson is that whoever is drafting him is drafting the potential. He’s still pretty raw, hasn’t really figured out how to use his size yet and certainly hasn’t learned how to take charge. I think he’s going to get there with time and development.

Potential Fit
Edvinsson is considered by many to be in that group of four highly-ranked defensemen, along with Owen Power, Brandt Clarke and Luke Hughes. We’ve typically seen Power ranked highest, with no consensus on the three behind him, depending on which set of rankings you’d prefer to use. Edvinsson has been ranked as the draft’s second-best prospect, and he’s been ranked outside of the Top 10, as seems to be the case in this season’s draft. Edvinsson’s upside could be among the highest in the draft, but he’s also thought to need a bit of patience in development. The Kings recently graduated two left-shot defenseman prospects to the NHL level in Mikey Anderson and Tobias Bjornfot and could certainly give Edvinsson the time he needs to develop.

Summary
After bouncing between the U-18, U-20 and senior levels in the 2019-20 season, Eklund spent the entirety of his draft year in the SHL, playing in the highest division in Sweden. A teammate of Tobias Bjornfot with Djurgardens, Eklund produced at an impressive rate for a 17-year-old forward, as he scored at over a half-point-per-game rate, with 23 points in total from 40 games played. Eklund outscored 2020 Top-10 selections Alexander Holtz and Lucas Raymond and ranked second in the league amongst “junior” aged players.

While he endured a few setbacks this season, Eklund impressed when he was on the ice. Eklund has been described as a player who skates with a purpose, both with and without the puck. His movements in the offensive zone create opportunities for both himself and his teammates, and he’s considered to be one of the draft’s most well-rounded forwards. When factored in with his production levels, Eklund is an interesting prospect who could add talent to whatever pool he enters.

What They’ve Said
Eklund on his playing style
I want to be a Top 6 forward for the team [that drafts me]. Maybe not the first year, but I want to work myself into that spot. I think I’m a player that brings energy to the team and I want to be an offensive threat every time I touch the puck. I want to be a guy that you can count on in different situations.

Dan Marr, NHL Central Scouting
Eklund played a big role on Djurgardens, contributing offensively and competed consistently with his skills and attributes as both playmaker and scorer … he always plays with a will to win. During the 2020-21 season he continued to display his high level of play, athleticism and character despite setbacks from an emergency appendectomy, a positive COVID-19 test that prevented him from representing his country at the 2021 IIHF World Junior Championship and an injury during an exhibition game that prevented him from participating at the IIHF World Championship.

Tomas Monten, Sweden National Junior Team Coach
William is a good skater, can move the puck, make plays. He has an OK shot but can play center or wing. He’s strong on the puck, good at the boards and can carry the puck. What I like most is his work ethic; he’ll always go full speed. He’ll block shots with his head if he had to, so you can us him in a top-six role, the fourth line, penalty kill and the power play.

McKeen’s Hockey
[Eklund] is a great playmaker with a quick thought process and is finding plays that no one else on the ice sees. He is a good shooter and has the ability to pick out spots in the net and put the puck there on a consistent basis. He is a main play driver on his line when he is on the ice and that is a rare thing when it comes to 18-year-old players in their draft year in the SHL.

Potential Fit
Eklund seems to check a lot of the right boxes when it comes to the Kings prospect pool. My personal drafting philosophy is to select the best available player, regardless of position, but at eighth overall, Eklund could potentially check both boxes. As a shifty, skilled winger, Eklund has already shown he can produce offensively in one of the world’s top leagues. Adding that type of player to the left-wing position in the organization wouldn’t be a bad thing either.

For more draft-eligible prospect content, you can find that on All The Kings Men as Jack Jablonski is joined by draft experts to break down the 2021 Draft class in segmented groups.

By Zach Dooley
101 Comments
Looking to the Future