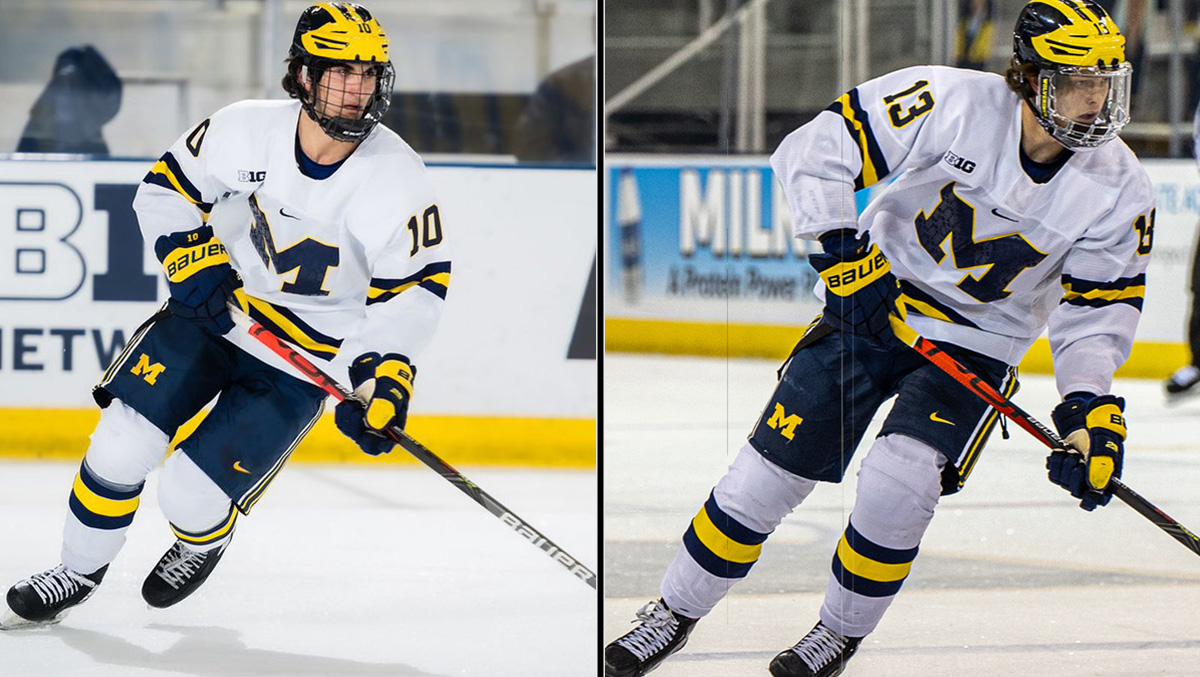 Recently, the NHL made 10 prospects available to media, ranked among the top draft-eligible skaters. With the 2021 NHL Draft quickly approaching, LAKI takes a dive into the possible options for the Kings at their No. 8 draft position in the first round.

Summary
As a freshman on a young and very talented University of Michigan team, Beniers ranked third on the team in points (24) and was tied for the team lead in goals (10) alongside the 2020 first-round selection of the Vegas Golden Knights, Brendan Brisson. Both statistically, analytically and through the eye test, Beniers’ season was regarded as one of the best among draft-eligible prospects, rising his draft stock towards the top of many boards.

At 6’1” and a solid build, Beniers is looked at as perhaps the top and most complete two-way center in the draft. While his offense is extremely well-rounded, a lot of praise has been given to his defensive effectiveness and accountability. Beniers is a terrific skater and has very good top-end speed, which allows him to do what does best, make plays. Known first as a playmaker and a pass-first player on the offensive side of the ice, Beniers is a very impactful and relentless forechecker with great vision and a high hockey IQ. Beniers eye-opening 2021 started at the 2021 World Junior Championships when he solidified Team USA’s second-line center slot and played a large role in helping the team to a Gold Medal.

What They’ve Said
Beniers on when he feels he’s ready to play in the NHL
I think it might be a few years. I do think I’m pretty close, but it takes a lot of work to stay [in the NHL] and be impactful. I also have to be ready mentally and physically. I’m hoping it soon though, that would be pretty cool.“

Beniers on how he played at the 2021 World Junior Championships for Team USA in route to their Gold Medal
I think my ability to make plays and see the ice, along with my hockey IQ was pretty good. My ability to skate and have good edges allowed me to play at the faster pace and have an impact while I was [at the WJC].

Beniers on the defensive side of his game
I definitely take pride in it and make sure I’m playing well defensively. I think it comes along with my hockey IQ and how I played growing up. My dad coached me when I was really young, and he was always emphasizing to play the game the right way, by playing defense and making sure you’re behind the puck… Also, growing up watching [Patrice] Bergeron, he’s one of the best two-way players in the game… It’s how I learned the game. I just try to continue that on, year after year and focus on my defense before the offense.

Bob McKenzie, TSN
Beniers plays a strong 200-foot, two-way game with a big engine that consistently revs high. Beniers has a sneaky above-average skill level as well. Beniers excelled for Team USA at the 2021 World Juniors. Beniers is viewed by NHL scouts as the only legitimate projected NHL center in our top 15 rankings. Other Top 15 prospects on the TSN list may play center now, but the consensus view of the scouts is that only Beniers will play that position in the NHL.”

Tony Ferrari, Dobber Prospects
[Beniers] affects the game in so many ways from scoring at an impressive rate to turning play around in his own zone. Beniers is an incredibly intelligent and cerebral player who attacks the opponents at their weaknesses.

Potential Fit
Going by recent mock drafts, Beniers is likely to be taken before the Kings select at eight, but if the Massachusetts native is still on the board when the Kings are on the clock, he makes a lot of sense. Yes, he is a center and yes, it’s well documented that the Kings have a ton of centers in the organization, but regardless, Beniers ceiling is extremely high and has the makings to be NHLer for many years to come. If indeed the Kings select Beniers, there are plenty of options with moving players to the wing to maximize the forward prospects in the system, if and when the time came.

Summary
In the 2019-20 season, Johnson played in the British Columbia Hockey League, better known as the BCHL, a Canadian Junior league that allows players to play top-level hockey without losing their college eligibility. During that season, Johnson, who played for the Trail Smoke Eaters (awesome name) and recorded 101 points (41-60=101) in 52 games. Johnson was named the MVP of the BCHL that season. Taking the road less traveled as a Canadian, Johnson came to the United States and played college hockey this past season for Michigan and shined. The northern Vancouver native averaged over a point a game in his freshman year and ranked second on the Wolverines in scoring.

Johnson is an all-out threat offensively and holds two traits that rarely go together – patience and aggressiveness. For the majority of the season, Johnson played left wing alongside Beniers……and they clicked. Johnson’s game is centered around his offensive creativity and elusiveness. He has the ability to make the types of plays that everyone dreams of making and practices in their backyards. He’s scored goals doing the “Svechnikov” or “the Michigan goal” and buried goals between the legs. With high-end vision, quick acceleration and the ability to make plays in traffic, Johnson is a talented player in the offensive zone. The left-handed offensive force is also dangerous on the power play along the half boards as a facilitator.

At 167 Lbs, Johnson’s weight hasn’t allowed him to reach his full potential both offensively and defensively. In time, Johnson will become better in his board battles and those 50/50 pucks, giving him more opportunities to create on both ends of the ice.

What They’ve Said
Johnson on when he thinks he’ll be ready for the NHL
I’m pretty confident with the way my training is going, and we have a really exciting team [at the University of Michigan]. The team is ready to go for a national championship next year, but we will see how my development goes. I’m confident it’ll be sooner rather than later.

Johnson on what he learned about his game in his freshman year at Michigan
I learned about some areas that I can improve in that I didn’t realize I had to in the BCHL. I learned that I can be a little bit more explosive, but it was also really good to see that a lot of my offensive instincts and a lot of my plays translated into creating offense in college.

Johnson on who his favorite player to watch is
I love watching Patrick Kane and Elias Pettersson. Both of those guys are very smart players and they make a little, subtle plays. I love watching both of them on the power play too, especially Pettersson, I watch a lot of the Canucks power play. [Pettersson] is was really good there.

Bob McKenzie, TSN
Kent Johnson, a Canadian from Port Moody, B.C., is a flashy, skilled offensive forward who scouts project as an NHL winger. He’s been known to score highlight-reel goals. One scout had him as high as No. 2 for overall rankings.”

Mike Morreale, NHL.com
[Johnson] is an offensive sniper who plays with pace, skill and creativity, Johnson thrived at left wing this season. The 18-year-old led first-time NHL Draft-eligible NCAA players with 18 assists and 27 points in 26 games.”

Bailey Johnson, Smaht Hockey
Johnson is as creative as they come. Whether it’s passing and shooting between his legs, lacrosse moves, or anything else you’d find on a highlight reel, if you can dream it, he can probably do it. Michigan coach Mel Pearson has a longstanding philosophy of allowing his skilled players the freedom to exercise their creativity, and Johnson has undoubtedly benefited from that thus far, whether it’s sending a spin pass to a teammate wide open in the slot or finding a lane between three defenders.

Potential Fit
The versatile forward makes an enticing case to be drafted by the Kings if he’s still on the board when the Kings are on the clock with the eighth overall selection. Projected to go right around eight, Johnson fits in well with what the Kings have going on in their prospect pool. As an offensive threat, Johnson’s biggest attribute to the Kings after his skill might be that he’s left-handed. With the Kings prospect pool slanting more towards the center position, and right wing after that, I wouldn’t say that he’d be filling a “void”, but he would definitely bolster the offensive producing left wing position in the Kings system.

The 2021 NHL Draft is scheduled for July 23 and 24. Following the addition of Victor Arvidsson in exchange for a 2021 second round pick and 2022 third round pick, the Kings now have seven picks in this year’s draft. Over the next few weeks, we’ll be showcasing several draft-eligible prospects here on LAKI, beginning with those selected by the NHL for media participation last week.

For more draft-eligible prospect content, you can find that on All The Kings Men as I am joined by draft experts to break down the 2021 Draft class in segmented groups.

By Zach Dooley
101 Comments
Looking to the Future