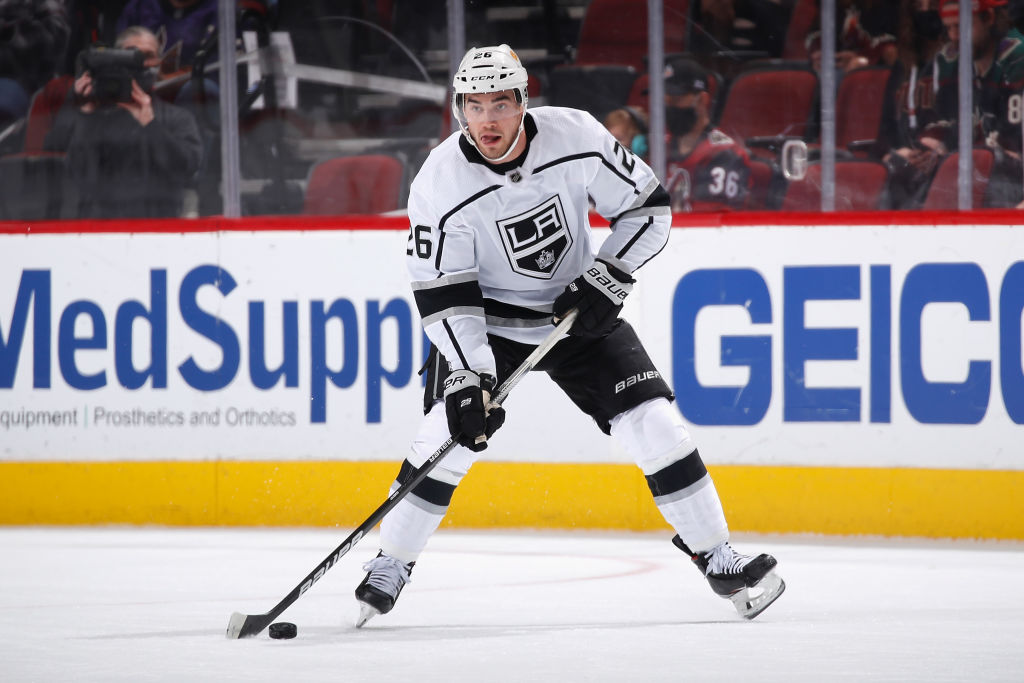 Today we take you into the weekend as we polish off the right side of the Kings defensive corps, with a look at Sean Walker’s season that was. For the other two members of that group, seasons in review have already been completed for Drew Doughty and Matt Roy.

Walker began the first year of a four-year contract extension, which he signed back in September. Similar to Roy, Walker finished what was just his second full season at the NHL level, though it certainly feels like he has been around for longer than that. With an ability to play up and down the lineup, and on both the left and right sides, Walker proved to be one of the more versatile members of the Kings backend. He played in 47 of 56 games, missing some time around an extended absence with a facial injury midseason.

Walker’s season had its share of ups and downs. He missed Opening Night while on the NHL’s COVID-19 List but returned to play the next seven games before he took a Matt Dumba shot to the face in Minnesota, a block that cost him more than three weeks of game action. After returning, it took Walker some time to find his stride offensively, but he closed the season on a tear as the league’s highest-scoring defenseman during the month of May.

Walker’s close to the season, as elaborated below, came with an increased shot volume and he attributed that to a mindset down the stretch. His head coach noticed the changes in multiple aspects of his game.

“Absolutely, and we talk about his shot, but a lot of his shot is coming of the rush and joining,” McLellan said of Walker in May. “To me, that’s legs, that’s the willingness to use your legs in certain situations and be available and then the shot comes. An aggressive mindset, but not to the point when you’re causing any issues coming back the other way. He’s done a good job of that lately.”

Trending Up – In a lot of ways, Walker and left-shot blueliner Olli Maatta, his most common partner this season, formed an effective pairing, especially as a third pair. The Walker/Maatta duo placed above the 50 percent line in Corsi and high-danger chances, and were above the team average in both categories, plus scoring chances. In terms of strictly creating, no regular pairing created more attempts on a per-60 minute basis than the Walker/Maatta pairing did.

That applies to Walker as a whole, as well. The Kings generated more shot attempts per 60 minutes with Walker on the ice than any other regular blueliner, while he trailed only Doughty in terms of scoring chances for. Individually, Walker is expected to produce offensively, it’s a part of his game. In terms of raw production, Walker saw a slight jump, going from .34 to .38 in points per game from the 2019-20 season. At even strength, Walker jumped modestly in goals, assists and points from last season, as well as shot attempts, as he led all LAK blueliners with 15 even-strength points.

“I think going back to last year, that’s the mindset I’ve always wanted to have,” Walker said of having a shooting mentality. “Coming into this year, I didn’t do that as much so I’ve been trying to get back to that lately. I’ve gotten some good bounces and I’ve got to continue to do that for the rest of the season.”

Trending Down – While the attempts went the way of the Walker/Maatta pairing, the goals for and against did not match. Among Kings regular defensive pairings, the two with the most goals allowed per 60 minutes were Walker paired with Maatta and Kurtis MacDermid. In some ways, this does match the underlying numbers. Walker’s pairings typically are high action, meaning towards the top end in both chances for and against, which you’d tend to expect from a player with his abilities.

In other ways though, especially on his pairing with Maatta, the numbers didn’t quite matchup.

There’s no defined stat for “luck” but PDO does a decent job of indicating it. PDO is a simple statistic that measures shooting percentage for + save percentage for. Across the league, this balances out at 1. Of defensive pairings around the NHL with at least 300 minutes played this season, the Walker/Maatta pairing had the fourth lowest PDO at just .953. The duo wasn’t perfect, but they likely performed better than the goals for and against went this season.

While we saw exactly what Walker can be at the end of the season, he also had just four points, all assists, from his first 20 games played. Seeing more consistent production over the course of a full season, more in line with his second-half rates, would take the Bowling Green product to that next step in his evolution.

2021-22 Status – Similar to Roy, Walker recently signed a contract extension that keeps him as a part of the Kings organization through the end of the 2023-24 season.

With that extension comes added expectations and responsibilities, with Walker and Roy adding solidity to the right side of the blueline in Southern California. The expectation for both players is that there is still room to grow and get better, entering just their third full season at the NHL level.