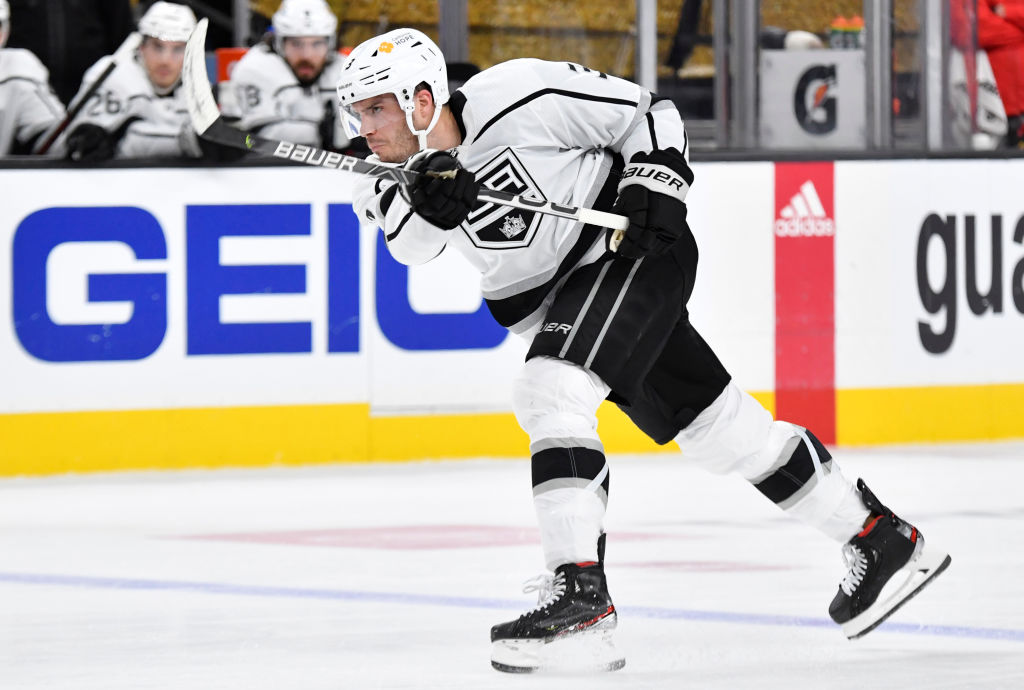 We continue the right side of the backend this week with Matt Roy, who skated on the team’s second pairing this season when available for selection. We touched on number-one defenseman Drew Doughty here, and we’ll dive into Sean Walker’s season that was later on this week.

Roy’s campaign was just his second full season at the NHL level, though he certainly feels like more of a seasoned veteran than his games played count would indicate. Coming off of a rookie campaign that earned him recognition with a vote for the NHL’s All-Rookie Team, as well as the Kings defensive player of the year award, expectations were higher on Roy in his sophomore season.

It was a strange season for Roy in many ways, with several different defensive partners, as well as two separate stints out of the lineup, but his even-keeled demeanor and consistency earned him praise from the coaching staff, with the nickname “Steady Eddie” to boot.

“Mentally, Matt Roy is an easy or a tough read because it never changes for him,” Todd McLellan said. “He’s Steady Eddie, I think I’ve used that term a million times. His demeanor doesn’t change a lot, he does get excited when things go well, he gets a little pissed off when they don’t, but he’s got a very steady approach from practices to games to preparation. I think we would be concerned if we saw him out of character, but most of the time we see him in character, so good for him.”

Trending Up – Let’s start with the obvious – No regular defensive pairing for the Kings allowed fewer goals, on a per-60 minute basis, than the pairs involving Matt Roy. Roy had three common partners this season – left-shot blueliners Mikey Anderson, Tobias Bjornfot and Kurtis MacDermid. Of the pairings on the Kings with at least 60 minutes together played at 5-on-5, the three lowest in terms of goals allowed are Roy’s, with each of the aforementioned partners.

This is one of those situations where the eye test jives with what the numbers say. Everyone thinks of Matt Roy as being solid in his own end and, no matter who he was paired with, the puck went into the net less when Roy was on the ice. Not giving up goals is a good way to be thought of as a good defensive defenseman.

The lack of goals against wasn’t just applied at even strength, either. Roy was among the NHL’s Top 10 on the penalty kill as well in terms of fewest goals allowed per 60 minutes. On one of the league’s best penalty-killing units, Roy was among the best at keeping the puck out of the net. Again, not giving up goals is a good thing.

Roy’s game was lauded for consistency, and the Michigan native took steps forward off the ice as well. While not an overly vocal guy, by his own admission, Roy’s play has earned himself a place in the team’s secondary core, with his presence as a guy who leads by example something that Is valuable around the team’s younger defensemen.

“Personally, I just try to lead by example as best I can,” he said. “I’m not going to be one of the rah-rah guys in the locker room, we’ve got the older guys for that, but I try to learn from the older guys and just try to bring about my daily routines. Hopefully, some of the younger guys can pick up on a couple of things and I’ve been playing with Toby a lot recently, Claguer, Mikey last year, so I think that there’s been a responsibility there and I just try to help them out as best I can.”

Roy’s consistency and evolution earned him a three-year contract extension, keeping him with the organization through the end of the 2023-24 season. Certainly a major positive for the 26-year-old blueliner, who will be a part of what the Kings are building moving forward.

Trending Down – Roy’s 2019-20 season placed him amongst the NHL’s best defensemen in some possession metrics, and his numbers in that area certainly were not as strong this season. That, really, can be said though about the Kings as a whole. In 2019-20, the Kings were the NHL’s fourth-best team in terms of CF%, with Roy the NHL’s fifth highest-ranking defenseman. This season, the Kings dipped to 22nd in the NHL, and Roy fell by nearly 10 points. While his defensive numbers stayed relatively consistent, Roy’s rates for scoring chances and high-danger chances fell off similarly.

It can also be noted here that Roy had perhaps the toughest season, health-wise, of any King. In late-January, Roy was boarded by Minnesota’s Kevin Fiala, which kept him out of the lineup for a few weeks with a concussion. In early-April, Roy was added to the NHL’s COVID-19 Protocol list, which kept him out for another extended spell. In the 12 games Roy missed, the Kings posted a 3-8-1 record.

A silver lining, however, was Roy earning a nomination for the Masterton Trophy, for overcoming both setbacks.

2021-22 Status – With his contract extension now signed, Roy’s place on the team next season and for the foreseeable future is solidified.

With the extension, though, comes greater responsibility. Roy will be counted on more as he continues to become more of a veteran presence for a growing Kings team. While he earned every bit of the extension he got, the bar will be set higher as he enters the first season of it.