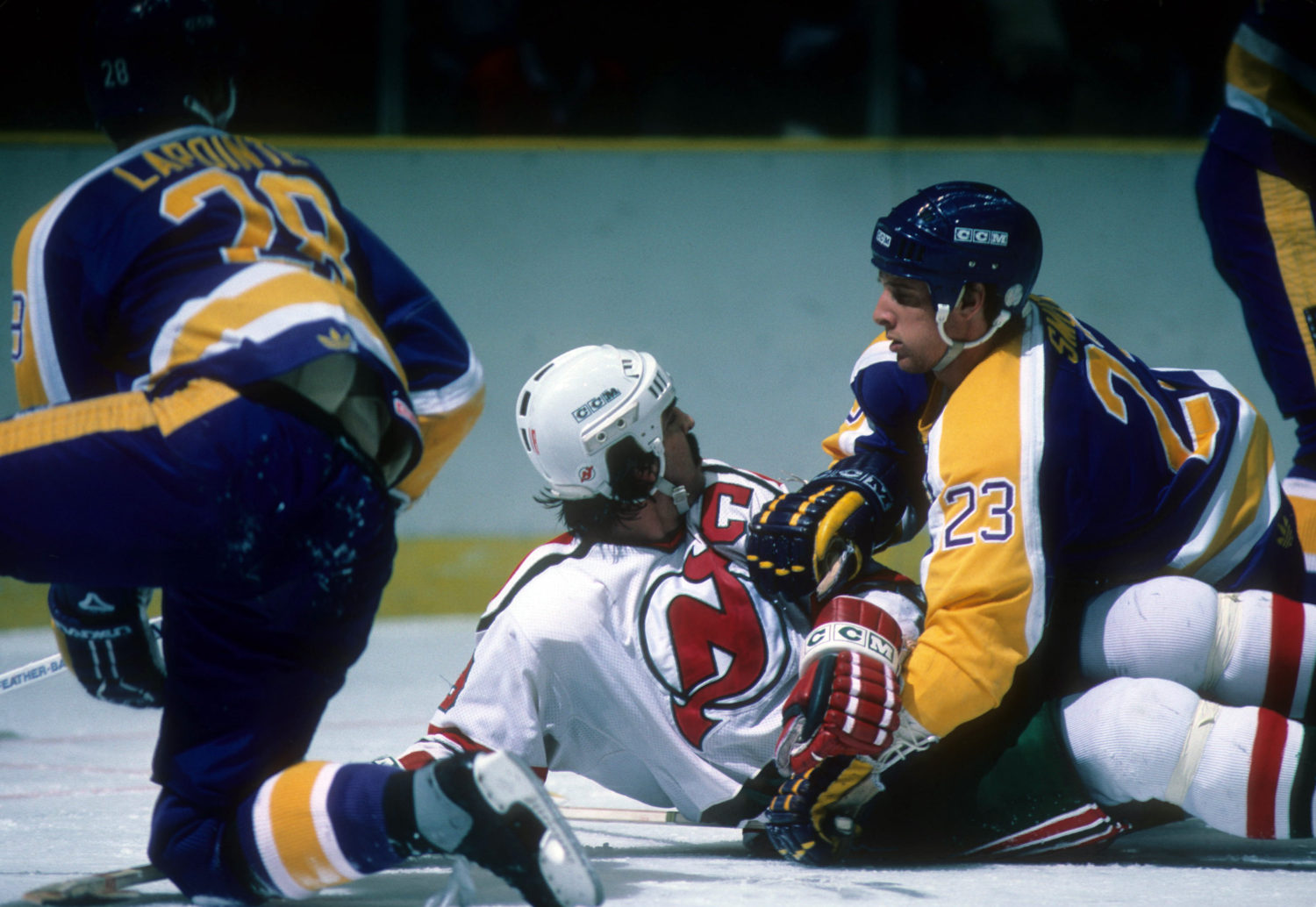 INSIDERS. A fine Saturday to you and yours. Additional lineup and preview-type notes are here, and make sure you check out trade coverage pieces detailing the impetus (with Rob Blake), the player reaction (with Alec Martinez) and conversations with Trevor Moore and Cal Petersen.

— The vitals: As shared yesterday, Cal Petersen is in goal for Los Angeles. He did not face the Devils last year. Trevor Moore and Joakim Ryan are in and expected to replace Nikolai Prokhorkin and Kurtis MacDermid. It wouldn’t be a shock to see groups of Iafallo-Kopitar-Brown, Kempe-Carter-Toffoli, Moore-Lizotte-Wagner and Grundstrom-Amadio-Lewis to start, but don’t hold me to some of those left wing projections.

— Their vitals: 6-foot-4, 225-pound Mackenzie Blackwood will get the start in net. He stopped all 46 shots in his last outing, a 5-0 win at Philadelphia in which the Devils were out-shot 46-19 and lost 36 of 53 faceoffs. New Jersey is third from the bottom with a 46.9% faceoff rate, but them’s the battles you face in breaking in a world-class talent like Jack Hughes, who’ll center the first line tonight, as composed in the calligraphic artistry of Amanda Stein:

Here’s your #NJDevils lineup today at morning skate ahead of facing the Kings.

🔸 No changes from game vs Philly
🔹 Vatanen did skate, but as the extra D with Colton White.
⚠️ Nico Hischier remains out
🥅 Blackwood pic.twitter.com/OWVwP0LnNi

Nico Hischier and Sami Vatanen will miss their third straight games with lower-body injuries. Vatanen skated this morning; both players are classified as “day-to-day.” Mikey Anderson’s brother, Joey Anderson, is back up with New Jersey and will play his third game of the season tonight. The family was recently reunited at the AHL All-Star Classic, where Joey was a representative of the Binghamton Devils. The 21-year-old Joey Anderson, a wing who captained the United States’ 2018 world junior entry one year before his younger brother did so, has four goals and seven points in 36 games. Interim Head Coach Alain Nasreddine praised his “bang-on” attention to detail. “Just the way he carries himself, the way he approaches every day, it’s a great example for everyone in our room. He’s always ready to go.”

— Oh, what a coincidence that LA Kings Executive Vice President, Hockey Operations and Legal Affairs Jeff Solomon, a New Jersey native and Rutgers graduate, is on this trip. I say that in jest because the trade deadline is in two weeks. He’s not just on this trip for a late night slice at Pizza Town USA, an institution in his hometown of Elmwood Park that checked in at #5 in NJ.com’s September rankings of the 34 best “old school pizzerias” operating in New Jersey.

Solomon talks a big game about bringing the staff out to Bergen County for a pie, as noted in this profile by Tom Gulitti during the 2014 Final, but it just didn’t materialize on this trip. It did several years ago when he and Nelson Emerson made a detour after a nighttime arrival with the team in Newark, but despite the potential caucus of fellow Garden Staters Joakim Ryan, Rob Koch (Senior Director, Team Operations and Hockey Communications) and Jon Gomez (Senior Manager, Hockey Communications), there weren’t any takers this time around.

“I know that he’s got some of the management guys for the special bagels and a certain type of pizza. He’s been bragging like crazy,” Todd McLellan said of Solomon on Friday. “You know that Pinnochio commercial, that Geico? I’m waiting for his nose to grow.” It’s hard to reference Jeff Solomon’s name without eliciting a smirk or some lighthearted smack talk, an appreciation for his detail and CBA mastery — but also a career defined by his blue collar roots. Jack Harris of the LA Times recently caught up with Solly, who was hired by the club in 2006 after a long career as a player agent.

Speaking of pizza, across New York Harbor the footsteps laid by Alex and Jim drew a contingent of Kings fans, who are often well represented on this trip.

— Back to New Jersey. Joakim Ryan is a native of Rumson, a Monmouth County town at the northernmost end of the Jersey Shore and will play in front of his parents, family and friends tonight. He played AA hockey nearby with the Red Bank Generals and traveled largely around the Tri-State area and Pennsylvania. That meant his family took a number of trips up to Lake Placid, where he’d compete in the Can/Am tournament on the 1980 Olympic ice. “We’d go up there every winter, so I played for the Generals in so many tournaments there,” he said. “We played on that rink all the time, it was great.”

He eventually joined the AAA Junior Devils and from there played at Christian Brothers Academy, a prep school that also produced James and Trevor van Riemsdyk, and then moved on to USHL-Dubuque and Cornell, where he was San Jose’s seventh round pick in 2012 after a freshman season with the Big Red. The 198th overall pick, Ryan leads all 2012 seventh rounders in NHL games played to date and tonight will face the 202nd overall pick from that draft, New Jersey’s Nikita Gusev, who won a gold medal with Nikolai Prokhorkin at the 2018 PyeongChang Games.

A New York Giants and Eli Manning fan who resides north of the dividing line and therefore identifies much more strongly with the New York-area pro teams rather than those in Philadelphia, Ryan – like many of us – was raised on Bruce Springsteen. “My dad’s a big Springsteen fan. I like his old classic songs, not so much the newer stuff. But his old classics, I like all of them,” he said.

“Glory Days, Born to Run, Dancing in the Dark, obviously Born in the USA is a classic. Tenth Avenue Freezeout. Just the classics, pretty much.”

— Carl Grundstrom on fellow 2018 Calder Cup champion Trevor Moore: “Just a great teammate, I remember. Always in a good mood and always doing everything for his teammates, so only good memories.”

Moore totaled 12 goals and 33 points in 68 games with the Marlies as a 22-year-old in the 2017-18 regular season before surging ahead with another six goals and 17 points in 20 playoff games en route to the title.

“He was one of our best players that year, for sure,” Grundstrom said. “He helped us with scoring goals but also shutting it down when we needed to, so he helped us a lot. A little bit of everything, but for sure one of the key players when we won.”

— And, finally, one last Rob Blake observation on how Cal Petersen was able to maintain a level head and consistency for an AHL team in Ontario that has experienced its ups-and-downs:

“His mannerisms, he was a captain in college, but the amount of games he played the first half of our season was extraordinary. We had to back him off a little bit of that, and I think he settled back down into his role. We understand where we want to go with him, we understand where we want him to learn from Jonathan Quick, and Jonathan’s going to push him every day because he’s so competitive. So that, going forward, kind of solidifies what we’re going to do for the next few years, but we felt a need to get Cal in games this year. We had to get a look at him and get him growing into that role.”

— Tonight’s officials are referees Marc Joannette and Chris Lee and linesmen Matt MacPherson and Derek Amell. As we are in New Jersey, Arlette will perform the national anthem. Let’s talk soon, Insiders.

Trevor Moore chats with @carrlynbathe after the #LAKings’ practice in Newark on Friday. “He’s always in a great mood, always doing anything for his teammates,” Carl Grundstrom said of his former teammate who will make his Kings debut Saturday against the Devils.