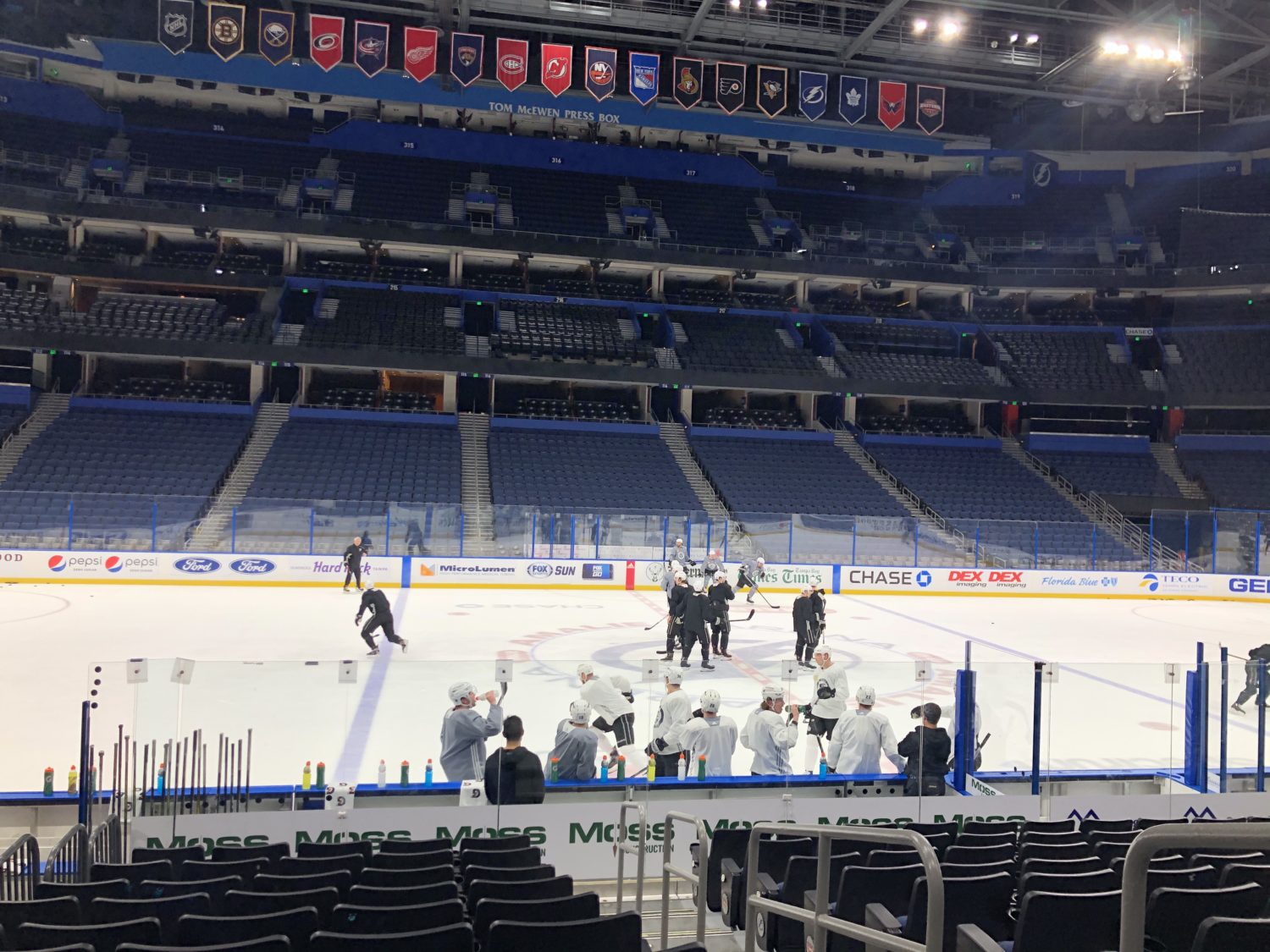 INSIDERS. A fine Monday afternoon to you from the banks of Hillsborough Bay. And no, Rich Hammond, I’m not going to visit the Outback Bowl Hall of Fame, so don’t even ask. (I’ll just tie it on to Michigan’s next trip.)

— Two days in Tampa, two practices. Sunday’s was more of a quick on-and-off that immediately followed a five-in-eight cross-country stretch, but Monday’s practice had some good meat to it, and last week McLellan had spoken about the rarity of mid-January practice time and the importance of taking advantage of it.

It opened up with a diagonal passing drill in which forwards were urged to “get inside” and establish correct positioning on a forecheck, or “positioning and just trying to get to the right area,” as Alex Iafallo described it. “[It helps our] timing, too – forechecking and breaking out. Drills like that will help us be quicker.”

McLellan spoke on Sunday about the team taking steps to practice and play at a raised pace and how it has improved since the beginning of the season, and Iafallo’s recent surge has aligned with the team’s ability to think and play faster. His nine-game point streak ended in Carolina but still sets him up for career-highs in assists and points and very possibly goals as well. His secondary numbers have also improved, notably as his 5×5 raw-Corsi rate leapt from 49.3% (pre-Christmas break) to 54.3% (in the eight games since).

“Our structure, there’s great set-up for that. It helps everyone play quicker, it definitely helps me, as well,” said the 26-year-old Iafallo, currently on pace for 45 points. “Forechecking, it’s easier to get pucks, and the whole structure that we’re pushing this year, it’s a good mindset for us. Make everything quick, everything fast and smart.”

Iafallo, who also attended development camps in Boston, Buffalo and Minnesota, attended Tampa Bay’s development camp in 2015, where he roomed with current Reign forward Stephen Baylis. He returned to Tampa’s camp one year later and potted a pair of goals in the finale of a three-on-three tournament, edging out Boko Imama’s team for the title.

— More Bolts connections: Austin Wagner and Brayden Point. The two Calgarians grew up “10 houses down” from each other, according to Kevin Wagner, Austin’s dad and Point’s coach in minor hockey when the Tampa Bay star was eight years old.

“We would play road hockey, [stuff] like that,” Austin Wagner said. “I’d say we’re still friends. We don’t really talk that much, but when we run into each other we’ll share a beer.”

Point, 15 months older, was a first-round pick in the WHL Bantam Draft, Wagner a fifth one year later. Point was selected by Tampa Bay in the third round in 2014, Wagner in the fourth in 2015.

“He was always the best growing up,” Wagner said. “There was no doubt that he was going to make it to this level and be as good as he is. For me, it was the complete opposite. I kind of hit my stride in that second year of junior. That’s kind of when I caught fire.”

— It was great catching up with Doug Quick and Kevin Wagner at practice today, and everyone’s excited for the full crew to arrive this afternoon. Not all players are represented by their fathers; Kyle Clifford will be joined by his brother and Jaret Anderson-Dolan his billet dad from Spokane.

Two seasons ago, Keith Forbort was a day late getting into Nashville; it’s not particularly easy for teachers to step away in January. But it led into a story Derek told on Monday in which Keith, then his fourth-grade math teacher, underwent hip replacement surgery and his mother, Mary, substituted for him for the remainder of the year. “Traumatizing,’ Derek deadpanned. “I mean, enough’s enough.”

— Pierre LeBrun of The Athletic ($) wrote about Alec Martinez and the trade market.

— More to come from the dads this week; Todd’s discussion on pace and the team’s engine is here. Let’s talk soon, Insiders. Thank you as always for reading.

👀 Join @BaileyLAKings at the @MammothMountain Watch Party at the new Lincoln Bar at Canyon Lodge on Tuesday.