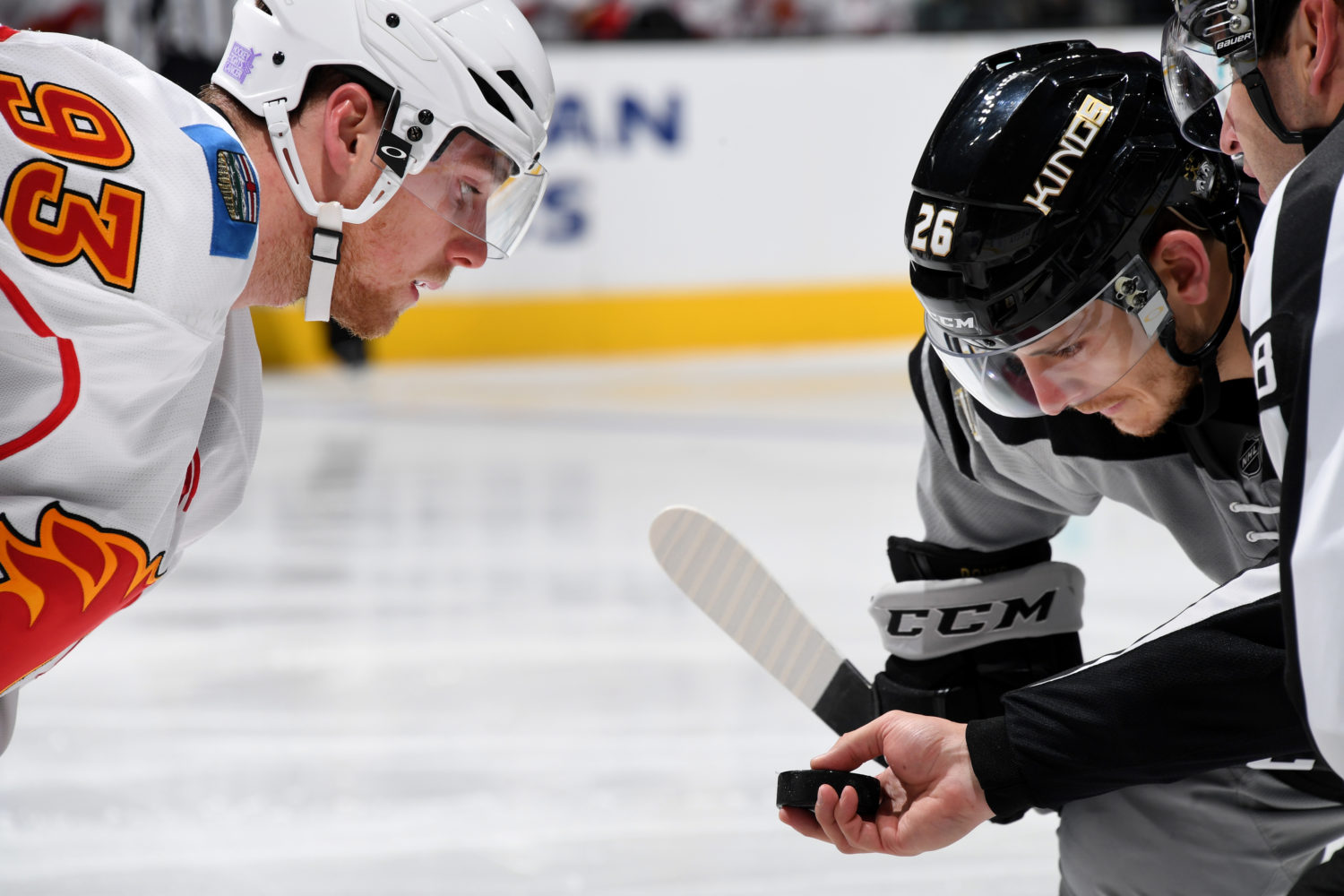 Good afternoon to you, Insiders. The Los Angeles Kings face the Calgary Flames at 7:30 p.m. this evening (FOX Sports West / FOX Sports GO / KABC 790 / I Heart Radio) in the final game to be broadcast by Ralph Strangis this season. Here’s a stick tap to Ralph, a wonderful addition to the Kings’ broadcasting crew and a supplier of boundless energy. If you see Ralph, ask him to tell you a story. Any story. He’s an excellent storyteller, which makes him an excellent broadcaster.

-The Kings took part in line rushes, but there appeared to be some movement in the depth lines. Based on what we saw, and in a conversation with Darryl Sutter, the following lineup appears to be the most likely one: Pearson-Kopitar-Iginla, Clifford-Carter-Brodzinski, Lewis-Shore-Brown, Andreoff-Dowd-Toffoli; Forbort-Doughty, Muzzin-Martinez, McNabb-Gravel. Ben Bishop, who has appeared in 167:50 of the last 181:47 of game time against the Flames, dating back to his debut on February 28, was the first goalie off the ice and is projected to start in net. Jordan Nolan didn’t skate – more on that in a moment – while Marian Gaborik, Adrian Kempe and Paul LaDue remained on for extra work with Jonathan Quick. Sutter confirmed that Kempe was out tonight. “You’re not going to learn just by playing, you’re going to learn by watching and by listening and things like that,” he said. “I didn’t like taking him out tonight, but it’s the same thing. Another young player in Andreoff that hasn’t played lately, so I wanted to get Andy back in. Dowd moved back in last game and Shore deserved to stay in the lineup, so I didn’t take them out tonight.”

-In several media scrums over the second half of the season, we’ve all kind of picked up on some Sutter disapproval of the amount of time Nolan has missed due to a muscle pull in his leg and an undisclosed injury sustained in his first game back in uniform. Sutter called the original ailment “a silly little injury” in February and deemed the situation “disappointing.” In March, Sutter was clearly not happy with his power forward being unavailable and said, “This is about right for his career. He’s a 40-to-60-game player.” That rift was agin apparent on Thursday. Asked whether Nolan, who didn’t skate, was “day-to-day,” Sutter responded, “I couldn’t tell you. I went out on the ice today and I was trying to figure out who the hell wasn’t out there and I figured out halfway through he wasn’t out there, so that’s about as much as I can [tell you]. You want guys really interested in practicing and playing tonight.”

-Hey, the Flames are in town for the rubber match of the season series (LAK: 2-1-1; CGY: 2-2-0). We all remember the emotional encounter with Calgary at Scotiabank Saddledome last week. Might there be a little carry-over into tonight’s affair? “We’ll see,” Dustin Brown said. “I think a lot of the stuff with the Drew situation was addressed, and at the end of the day they’re trying to fight, claw.”

-As for the Flames, it appears as though 23-year-old goaltender Jon Gillies, who led Providence to an NCAA title in 2015, will make his NHL debut tonight. The 6-foot-6, 223-pound Gillies has appeared in 38 games with AHL-Stockton this season, going 17-14-1 with a 2.95 goals-against average and a .909 save percentage. It is possible that Matt Stajan, Lance Bouma and Michael Stone could get the evening off, via Wes Gilbertson, while Roger Millions noted an alignment of Tkachuk-Backlund-Frolik, Ferland-Monahan-Gaudreau, F.Hamilton-Lazar-Brouwer and Versteeg-Bennett-Chiasson up front and a potential defensive group of Giordano-D.Hamilton, Brodie-Wideman and Bartkowski-Engelland. Meanwhile, Calgary could lock up the first Wild Card berth if they defeat Los Angeles in any fashion AND Nashville loses to Dallas in regulation.

-Meanwhile, I’ve been asked to pass along the note that Ice Guardians, a feature-length documentary on fighting in hockey, will be screened this Saturday before the Kings-Blackhawks Staples Center finale and will be followed by a special question and answer session with executive producer and co-creator Adam Scorgie, Kevin Westgarth, Luc Robitaille, Jarret Stoll and Matt Greene. Deborah Lew shared a really nice write-up on the making of the documentary here, while tickets for the screening can be purchased here. Proceeds benefit Kings Care Foundation.

-Uber has become an “official rideshare and transportation partner” of AEG properties, and prior to a recent home game, several Kings fans hopped into a car and were greeted by Lucky Luc. Did they have to choose the “carpool” option on the Uber app?