On Tanner Pearson’s path to becoming an established scorer:
I think he’s taken the steps – he played in the American League and did a good job, and then he was a player who went up and down to sort of climatize him for this, but whenever we sent him down and brought him back up you could see he was always maturing and a little better player. I think the playoff runs definitely helped him, whether he played very much or didn’t play very much, I think that really helped him, and then I think that two years ago, breaking his leg was a big setback for him. It took him almost a year – like, you look at last year, even though he scored 15 goals, it’s a long ways back to get back to being totally confident and totally healthy. I think it’s pretty natural for him. I’ve talked to him about it before, when he hit that 15-goal mark, it wasn’t an ‘I’m done’ deal, it was like ‘we expect you if you’re going to play on the top two lines to be a minimum 20-goal scorer,’ and he’s done that. Tanner’s come a long ways as a player in terms of his training and off-ice, too. That’s a big difference, too. Just the whole part of that, it’s a big difference. What is he, 24? We talked about these guys who are first or second-year players, well, they’re older than him. [Reporter: He had that long goalless streak, too, but he told me he never questioned himself, which I think speaks to the confidence of a young guy to say, ‘If I just stick with it, I’ll be OK.’] I think with a guy like Tanner, because he plays a pretty direct game, you can reinforce details with him a lot easier than other players, just because it’s more … to the point, specific areas on the ice, situation plays, things like that. One-on-one battles, like you can reinforce those little detaisl with him. I can remember, just in my own mind lots over the last few years with him, just little things, like it might be his stick, or where his feet are in a certain position, or things like that, and he does it all almost automatically, which means that, first of all, there’s a difference between listening and hearing. He’s a good student, which is really good, and he cares about the game. He’s been around a dressing room a long time. His dad was an equipment rep. He knows the nuances of a locker room. [Reporter: How much does it help when guys come up in that Black Aces kind of role? He was in that, if I remember right, one of the playoff runs. Is that where they learn-] Well, if it worked for everybody, then they would all be playing in the NHL. I think if you look at it, there’s a percentage that does, a percentage that doesn’t. There’s always two or three guys that think they’re being- [Reporter: Groomed?] No, that’s good if they think that they’re being groomed. But there’s always two or three that think that, ‘What am I doing here? I’m too good for this, and have had guys leave – not necessarily in this organization, but other organizations – we’ve had guys here who didn’t really [inaudible] play off. They may have gone to a different organization, but they’re not playing in America now. It’s the way the game it is. That’s again, one of the evolutions with the game, with the salary cap and 23-man rosters. So you don’t have a Black Ace team or those extras around the playoffs if your farm team’s playing. You don’t call up guys going down the stretch. That’s fake news when you say because you’re only allowed four. For example, a team like ours, it’s already used two, so you’re not calling guys up to look at them. That’s BS. You don’t have room to do it. [Reporter: So you don’t expect Dean to call anyone up?] You’re only allowed four. We’ve already used two. We’re down to 12 forwards now. I think that would be a stretch.

On Jordan Nolan’s progress:
It’s about time. He’s played one game in six weeks. Jordy hasn’t played much hockey. This is about right for his career. He’s a 40-to-60-game player. I really couldn’t tell you. [Reporter: Shore’s still out, though?] Shoresy’s not skating. When he skates, he’ll be ready to play. That’s when he is. I mean, it’s different injuries.

On players having played soccer as kids, or playing “two-touch” soccer before warm-ups:
Well, I guess it’s better for hockey players, because most of us played baseball or golf or something like that, so I don’t think they’d allow us to hit baseballs or swing at golf balls. [Reporter: Are there still things, like a defender in hockey and a defender in soccer, who still have to back up and have to pivot-] Yeah, you know, it gets them warmed up, it gets the reflex, and it allows them to be in sort of a group setting and have a little fiun before the game. That’s basically an evolution of the European playing coming over, for sure. This was only in the last few years that you started hearing about that. Most of that was, I think, was probably the Swedish player. [Reporter: But there’s no skill set that necessarily transfers?] Oh, sure, sure. For sure there would be. [Reporter: Did you play lacrosse?] Just indoor in high school. It must be part of the curriculum. Like, where we were in Canada, there was no soccer. [Reporter: Did you play baseball?] Yeah. Baseball, fastball, football, hockey. [Reporter: Don’t you think that’s a good thing that the kids today, they specialize when they’re young? They get playing everything.] Absolutely. When we were in San Jose and our kids were growing up, I would not let them play year-round. Brett wanted to play year-round hockey. I wouldn’t let him. It was the best thing – he was a good ball player, he was a good athlete. I didn’t want him to just be with his hockey friends. He had to find other kids and get involved, and it became a really important part of our family, just because with Chris, whoever Brett met, it didn’t matter the sport, he became the stick boy, the water boy, all that stuff, so it was great for him. He met a lot of guys, and then he plays ball.

On the potential to get burned out at a younger age when specializing in a single sport:
Yeah, I agree with you. And, especially, say it was hockey, it’s a lot easier to just go find a park and play catch or throw the football around. It is. Get some kids, let’s play. In San Jose, we lived on a … cul de sac, and quite honest, most of the kids that were on our street were African kids, immigrants. So they knew nothing about hockey. By the time we left there, in six years, Brett and all the kids, they had a hockey game every night. We had two nets in our garage. Those kids were all rollerblading, and I bet, that’s why there more California kids playing. When you think about the Kings, Ducks, Sharks, there were more kids who came in. Heck, by the time we left there, there were even dads that were out there playing with the kids. It was cool. Hey, that’s probably the reason why there are more California kids, Colorado kids, Texas kids. You know, it’s got to do with the heroes, right? [Reporter: Etem’s from Long Beach. … Matthews is from Scottsdale.] Myers is a big Texas boy. [Reporter: It’s funny to hear that accent in the locker room.] And even more so now, if you go watch an American League game, there are so many fathers-sons – where the parents ended up finishing playing – that’s why St. Louis has got a lot of kids now, Chicago’s got a lot of kids. The families settled there. It used to be primarily Minnesota, East Coast hockey players coming out. It ain’t. Now you’re getting pretty diverse. [Reporter: Tkachuk’s a Boston guy, right? And then they settled after St. Louis.] The kid was born in St. Louis. … [Reporter: Have you ever been up on the concourse in the building in Minnesota? They have the hockey gear, the high school teams.] Yeah, it’s awesome. I try and do a swipe all the time, make sure I look at everything. 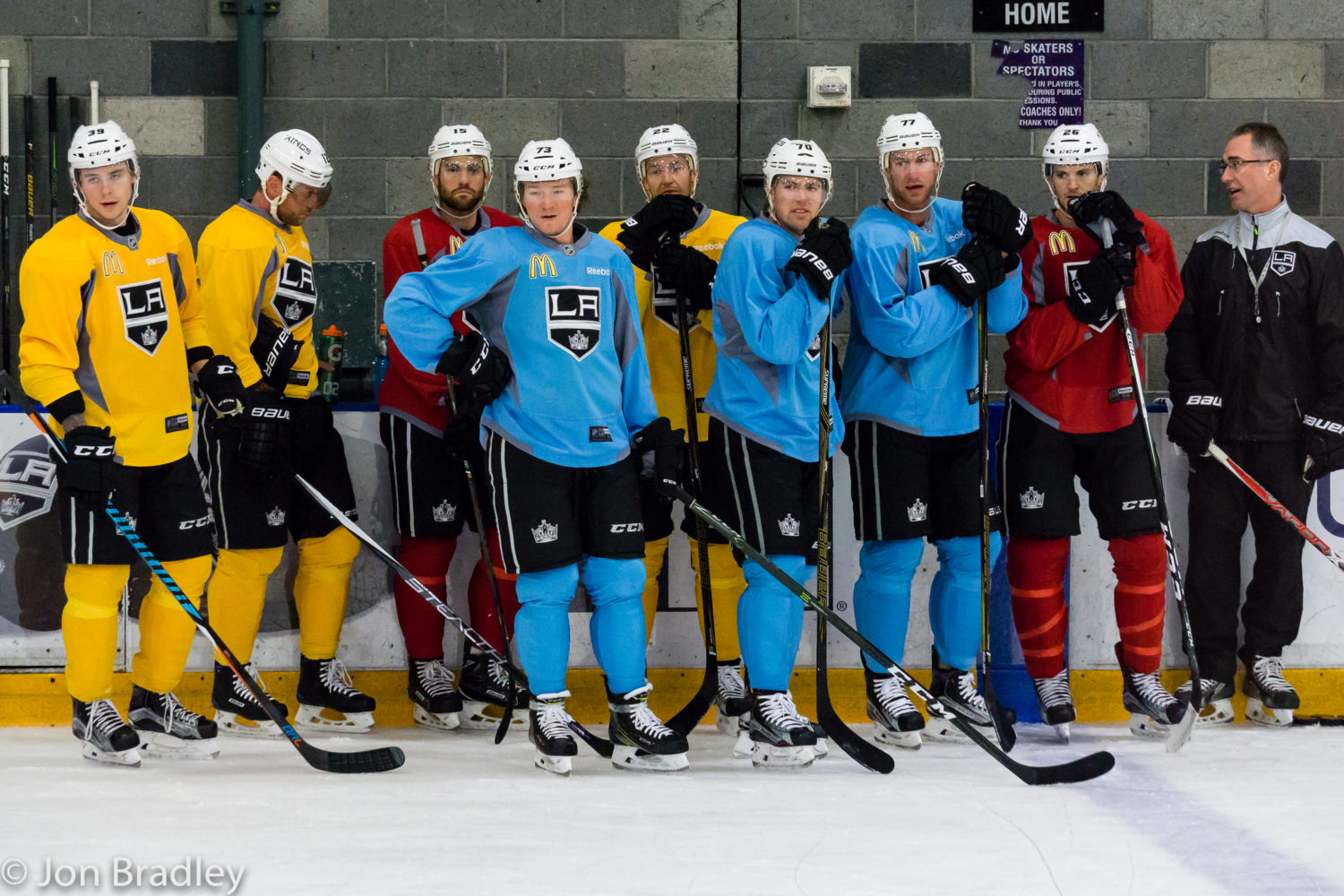 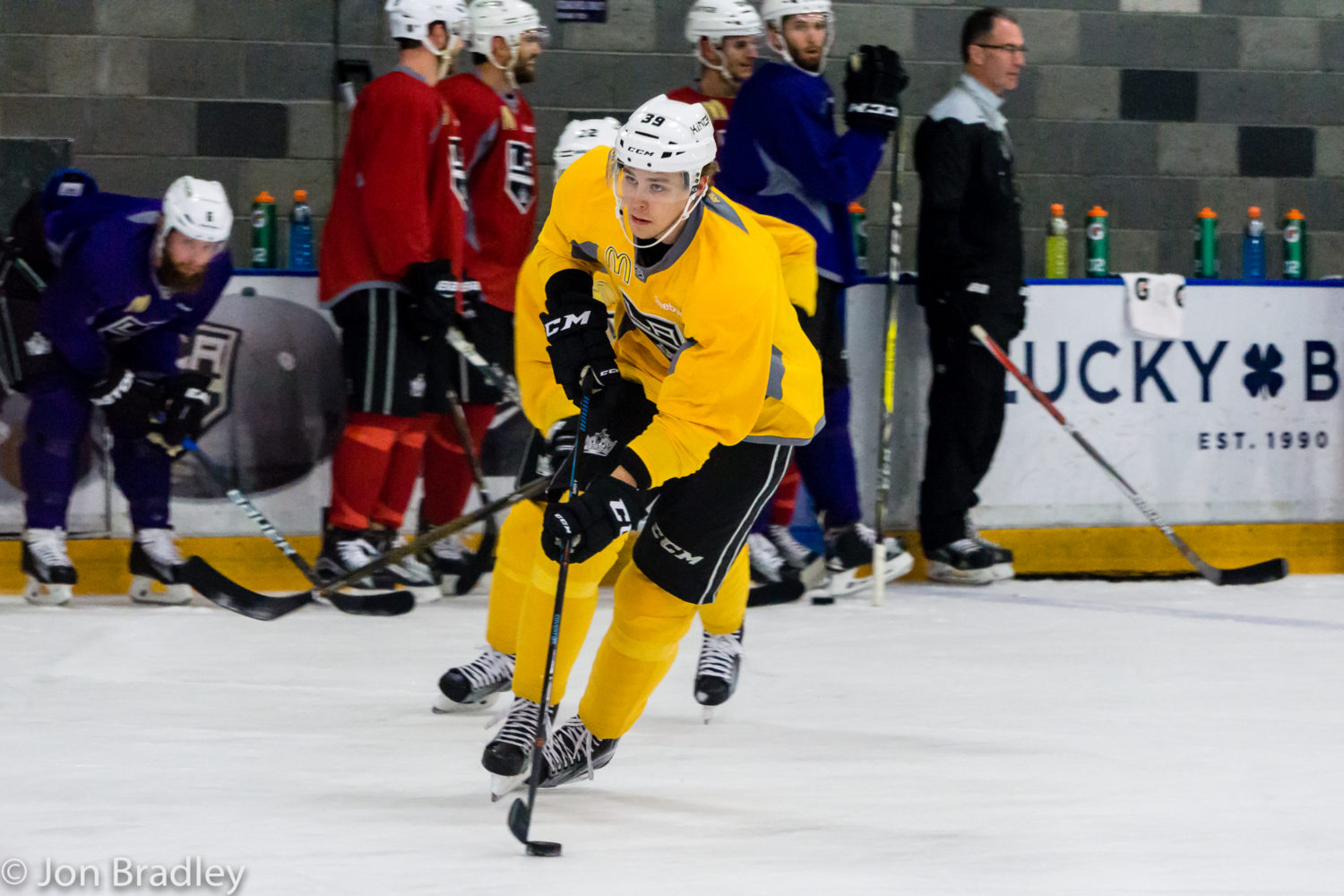 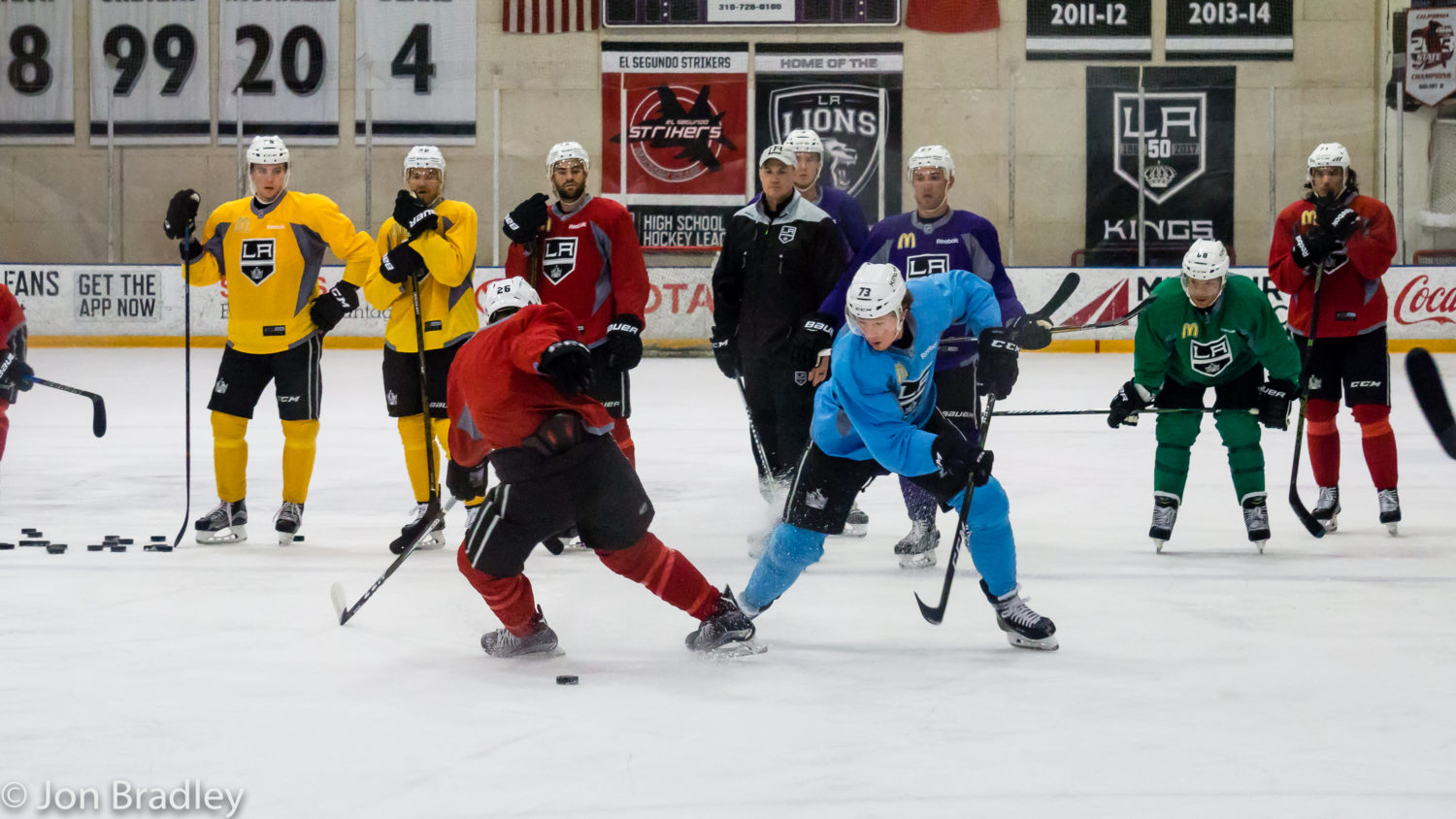 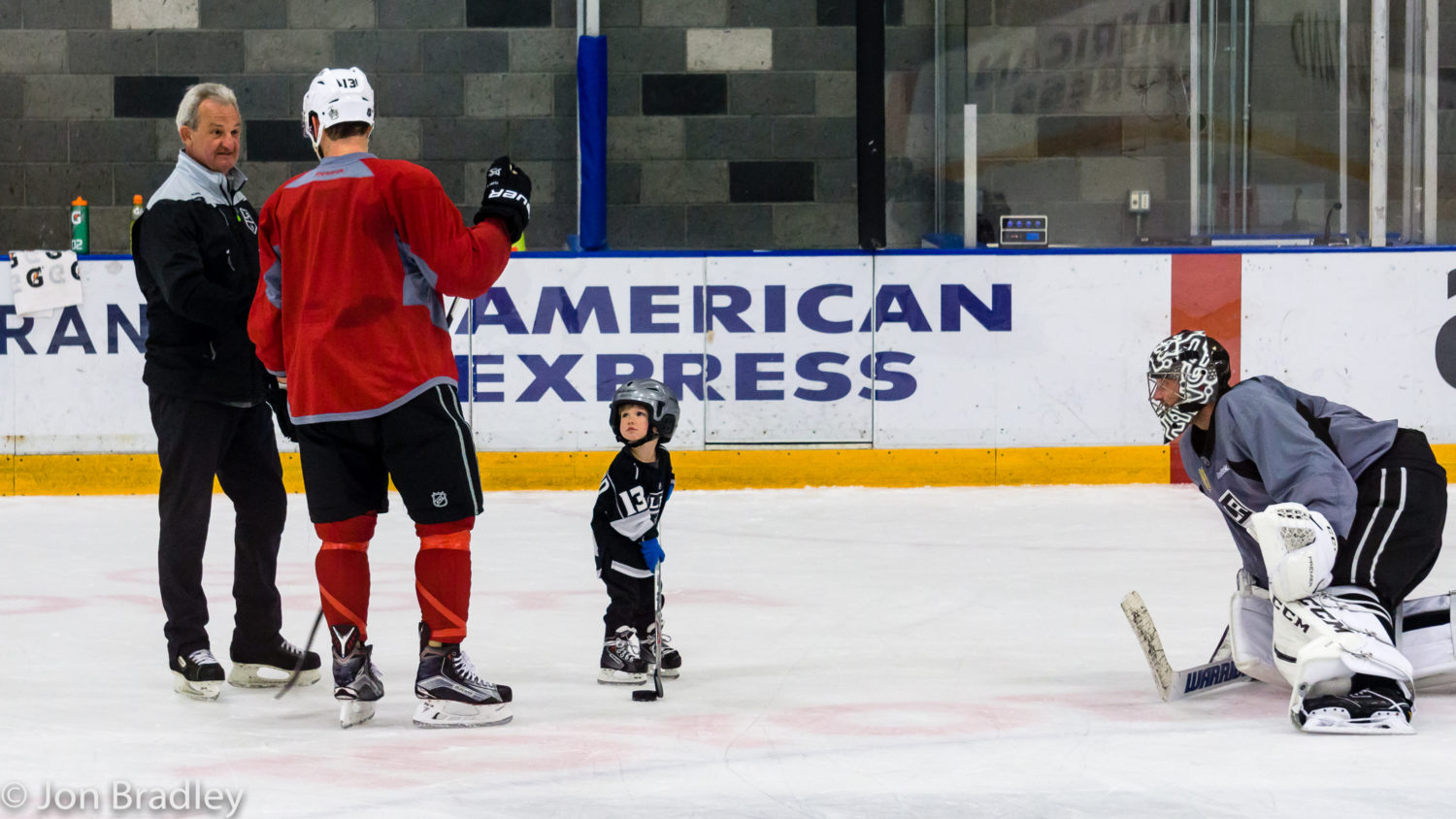 -stick tap to Kevin Baxter for the audio